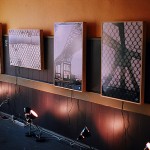 Well, there we were…as always, right where we weren’t supposed to be…at SoundWalk 2013 in Long Beach. Back near our starting point, actually, over on 3rd Street between Elm Ave. and Long Beach Blvd. For three of the last four years we’ve been within a few doorways of the same spot.

Igor Amokian was out and about and this year was entirely encyclopaedic. Check out his many videos on YouTube for a compendium including us:

Our favorite moment was a visit by the roaming phog masheen:

But unlike prior years, we got out a little bit, and managed to capture both Craque and the Small Drone Orchestra in action:

There won’t be a SoundWalk next year….