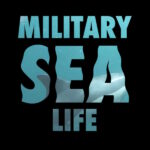 Projects that turn out to be ambitious often begin life in response to (1) casual invitations, (2) amusing suggestions, or (3) riffs on serious or outré topics. At least, our ambitious projects seem to. I’ve come to think of those as three warning buoys.

Maybe the ocean bottom of our imagination is a touch too fertile (says the shuddering needle on your bs meter?), or perhaps we’re not well-practiced at distinguishing seaweed from salvage; or it could be our tendency to work remotely and always in parallel with diverse personal projects—found sound? bees? wind harps?—means no one has a hand (or hook) to spare when the sails would be wisely reefed in preparation for a stiff gale. phog masheeen‘s proposal for an Artist-Curated Event for soundpedro2022, Military Sea Life, swept all three of our oft-ignored warning buoys right out to sea.

Now, the promotional items received and posted to date all reflect the title “Military Mammals“, but the term “Sea Life” in my initial conversation with Mark Soden struck wikiGong as food for just the sort of weird thought we like to traffic in, and it was off to the races with little discrimination between phyla, let alone restriction to the class Mammalia. Our musings on the Kraken in 2021 had been more of the giant squid than Harryhausen variety, and our initial “Shall we do it?” conversation about military application of “sea life” in general began with cephalopods and barely touched on dolphins or sea lions. We figured our host was already well down the investigative path of the US Navy’s Marine Mammal Program, so why put all our gestational effort into the same handbasket? Diversity [ahem!]…well, you get the idea.

Once we had actual video material, it was easy to excerpt some teasers for the slide show we’re now using as our project page. But, in the beginning, we had mostly inchoate thoughts and vague notions, as usual. Source material would be our first challenge. We (well, at least one of us) realized early on—based on experience from our maritime video projects of merely a year earlier—that found footage was perhaps a better bet than amateur video, unless we’d settle for images of hermit crabs and seagulls with an occasional sea lion barking in the distance. But, while there’s a lot of footage available out there, there are also plenty of licensing restrictions attached to much of it. Was there material on Wikimedia Commons sufficient for our purpose? That was the initial thrust of our media research.

Happily, the Commons has a growing library of videos of marine life, most of it licensed for reuse CC BY. It proved to be a good start, even suggested a narrative thread was possible. The notion that, if we were going to use only what was available CC BY or -SA, we’d have to take what we could get, became a theme of its own: how would one recruit marine animals to join the Navy? Maritime job postings became the next topic to research.

Recruiting in the animal kingdom

A cursory search of the web revealed such a trove of ironic material it inspired this post. For example, a listing for “Able-Bodied Seaman” includes the following “Physical Demands”:

But also “Other Duties”:

There must be historical reasons for this degree of specificity…and non-specificity. A job description for “Diver (Army enlisted position)” goes into further specifics:

After reviewing a few dozen of these, we found the Navy job postings refreshingly to-the-point. The representative Physical Screening Test Requirements, for example:

…are definitely not for the faint of heart (nor frail of limb). And certain of the official US Navy recruiting offices go above and beyond in terms of inspirational job description:

Wow! This last bit inspired my search for lesser-known marches and the delightful discovery that John Philip Sousa’s Who’s Who in Navy Blue has entered the public domain in the US.

While we didn’t use any of these examples verbatim, they helped us picture the vast challenges of the recruiting enterprise in ways our little scenario riffs hadn’t. We imagined a cast of a few, (re)tired, and involuntarily idle stepping up to meet these challenges with little more than a shoestring art budget, chutzpah, and dwindling insider knowledge…unhampered by preconceptions of class (Mammalia) or even phylum (Chordata?)…using whatever means of communication lay ready to hand. And so was born the conceit of New Abalonia Staffing, LLC.

For once, we proceeded to film without a written narrative foundation. We just recalled the most awkward interviews we’d ever experienced, or questions asked—on either side of the desk—and envisioned ourselves disinterested functionaries working for people who golf with retired officers. Then we merely followed the resulting script. What could possibly go wrong?

We also had some material “in the can”. Back in 2011, while preparing for the Long Beach SoundWalk, we collected a lot of video footage we’ve scarcely touched in a decade. We’d not managed to use most of Rebecca’s viola clips, which seemed a shame. How best to communicate with whales, anyway? Jacob’s jiu-jitsu posing and my underwater business suit appearance date from the same year.

After ten days of video compositing, as it came time to make cuts and wrap things up, I came up for air and discussed with phog masheeen the notion of presenting the work in installments. Mark suggested title leaders would be useful to identify our material and tie it all together. That launched the final search for a unifying set of images, both textual and thematic.

I’m sure you can find images of Old Glory waving in the breeze online, but I happen to live close to a dozen car dealerships that like to fly enormous flags over their lots. On any given day, at least one or two will be proudly on display. And on my reconnaissance drive—without gun, but resolutely with camera—I chanced to follow an SUV sporting a USNA window sticker with a lot of lettering in some iconic outline font (probably not USN-official, but Rockwell looked fine to me). Thirty minutes later, video of the Stars and Stripes was also in the can, ready for text.

So the most traditional element of these militarily-themed clips was not lifted from Wikimedia Commons. It’s on my to-do list to post the raw flag clips back to the site, just on principle.

Our recruit footage was derived almost entirely from public domain, open-sourced, or CC-licensed material. We’ve tended to post our own sounds in various repositories, including freesound and ccMixter, and believe the organic expansion of “the Commons” is one of the most compelling features of the Web. Attribution is appropriate and essential to this effort, so we’ve re-listed the video credits on our project page.

We hope you enjoy.

I had the honor of delivering the eulogy for my uncle, Dr. Ronald Kenneth Wells, this past August. Uncle Ron was a Milwaukee-area pediatrician and former Navy officer. Following his memorial service in Wauwatosa, Wisconsin, Military Funeral Honors were performed and the flag presented by US Navy officers.

I’d like to think Ron would have felt honored—and more than a little amused—to have Military Sea Life: Recruits! dedicated to his memory.