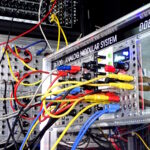 …in which we accelerate a long-planned studio expansion…

The ENKaudio Arts studio is where I cook up most of wikiGong’s sound and video, along with my own. It’s a hybrid analog/digital/retro space carved out of a northern California suburban bedroom, which is to say: pretty small. Still, even 120sf can consume astounding quantities of time and, occasionally, money. I’ve been planning an extension of the modular synth side of the house for years, only just getting to it. But now I’m in a real hurry, sensing thirty-five years of synth innovation may be imperiled by global market forces.

Since the late ’90s, the Eurorack modular format has had a really nice run. I’ve acquired a few large pieces in the format over the last dozen years, but the studio grows as much by opportunity and chance as by design: deals come along, and sometimes surprises, so capabilities accrue by fits and starts depending on what’s available and whether there’s a budget. Most of the Eurorack gear I have in house arrived as complete, pre-assembled synths—an Analogue Systems RS-1 Integrator and a Cwejman S1 Mk2—but I’m missing a few common functions I relied on in my pre-Eurorack youth (see collectors’ items). To address the holes, I’ve decided to add a modular frame to the line-up.

I like using live signals to trigger various synth effects. For example, pitch- and envelope-follower circuits and multiple sample-and-hold (S&H) modules can let a human voice or a viola “play” a synthesizer. The Analogue Systems (AS) RS-40 is a nice noise generator/S&H/clock combo, but takes up a fair bit of rack space and it’s the only S&H I’ve got. AS also makes one of the few high-quality analog pitch follower modules on the market, the RS-35N; I had none of those. So, more plainly speaking, I liked doing things like that when I once had access to the equipment.

The beauty of the modular approach is you can add functions like these one at a time. (The madness lies partly in the interconnecting patch cords, about which more, later.) I decided to “seed” the new system with modules missing from the studio’s audio and control voltage and I/O department.

Modules are seldom stand-alone. Most Eurorack modules need a rack to house them along with a power supply to provide enough of the right voltages. The hypothetical beauty of a standardized modular approach is that everything should just work together. But in a boutique industry driven by inventors, “should” is not a guarantee. The reigning Eurorack standard was introduced by Doepfer and, while AS signals are entirely Doepfer-compatible outside the rack, they are famously incompatible when it comes to power supplies, particularly cabling. And the next decision was what sort of rack to buy, or build.

Ten years or so ago, AS started making their “N” series units, which have two different power connectors: one for AS, the other for a Doepfer-style power cable. Many of the power-supply makers also added special sockets for alternate cables. Still, no one wants to smell the “magic smoke” of electronic wizardry dissipating in the studio after first power-up. While I could have swapped out some of my RS-1’s modules to make room for the RS-35Ns, that would have left me with non-Doepfer compatible leftovers. I decided to leave my RS-1 intact and use a Doepfer-style case and power supply for new modules, adjusting cabling if needed.

The case and power supply are the first significant expenses. Mess this up, and you’ll be buying different ones soon: wider, or deeper, or more powerful, or less noisy. There are dozens of case designs out there. I opted for an actual Doepfer A-100 P6 suitcase as a good blend of dimensions, durability, power capacity, portability, and price. It looks old-school. I’m OK with that.

Before actually buying a case, it pays to know what you’ll be putting in it and how much you want to expand. If you’re contemplating getting into modular synth building, I recommend signing up for a free Modular Grid account. MG is an impressive web project space, largely subsidized by users, synth manufacturers, and dealers (if you read German, check out Numerisch GmBH, the web designers behind it). Here, you can search a database of thousands of modules and mock up a collection, checking for fit in the rack and calculating power requirements and even estimated costs as you go.

For example, here’s a screen shot of the system I called “justAddsInstead” on Modular Grid. I created it to compare with the alternative approach of modifying my AS RS-1 (“modMyRS1“):

This is a full rack design. It uses a Doepfer 2 x 84HP case filled with modules to augment my current Eurorack line-up. If you visit the Modular Grid site, you’ll see the absolutely critical power consumption and rack depth requirements just below the layout, along with the (frankly staggering) market-price cost estimate. It still pays to do a spreadsheet comparison and double-check all manufacturer specs, but slapping it up on Modular Grid is far faster than doing all that web research just to audition candidate hardware and see whether it will fit.

First a pandemic, then supply chain collapse, and now there’s a bloody war on. These are perilous times…

It’s no coincidence that a lot of Eurorack modules are made in, well, the EU and neighboring countries. There’s a lot of cool stuff coming out of the former Eastern Bloc, with some of the best build quality. England, no longer an EU member, has always been innovative in the synth space. Licensed reissues and derivatives of classic ’70s designs can be found from several makers. The old Soviet Polyvox has been reinterpreted and reissued many times. Today, Modular Grid states “There are 13202 Eurorack modules to choose from. Users build 413996 Racks in this universe.” I’m certain users don’t buy and build that many racks, though; otherwise we could buy this stuff at CostCo.

This is still a boutique market where the inventors tend to do what they do more for love (fanaticism?) than for money. While many synth companies have survived hard times before, tough choices were made along the way. And under adverse market conditions, things have a way of becoming…scarce. So when I actually went hunting prices for those RS-35N modules, I got worried. Because a month or so ago, I could find only two used, older RS-35s in the US on the entire web, offered at double or more the MSRP; all the usual suppliers in the US—and not everyone even carries AS—showed the RS-35N as out of stock or had taken down all their former Analogue Systems listings. I didn’t even own the rack yet, and now I was worried I’d ever be able to get my hands on one of its key ingredients.

I found a pair of new RS-35N units through Signal Sounds, a distributor in Glasgow, Scotland (still a UK member, last I checked). The prices weren’t even shocking if you ignored the £ prefix (British Pound Sterling), and the strong US dollar and UK PM pandemonium even helped offset that a little. I figure I ended up paying a 15% premium to score two brand-new units, in hand within two days, shipping included. No one has them for sale in the US as I write this; they’re even out of stock at Signal Sounds despite a significant price rise. I will be very sad if these don’t come back on the market someday: they are the best pure analog pitch-tracking modules I’ve found in this format.

The experience got me noticing that other EU manufacturers’ products were also disappearing from distributors’ listings. There are signs that all is not well in the Eurorack market universe. We may be in for protracted shortages or even extinctions. Europe is wondering how to survive the winter; it has to be hard to keep dipping into your dwindling stock of components to build modules no one’s selling while you contemplate burning the furniture for heat come February. I wasn’t planning on filling this rack up even this fast, but there are already a few planned items I can’t find just a few weeks later.

The trade winds of a strong dollar are at my back, so I’m stinting other projects to accelerate this one. Buy European this fall, that’s my advice!

The system “as built”

Here’s what the new outfit looks like at the moment:

The first seven modules occupy a mere fifty-three HP units out of the 168 available in the rack! Not everything is in the right place, and there aren’t even any Doepfer modules yet. It felt like victory enough to have the RS-35Ns in place and functioning as advertised, along with the little (3HP) Erica Synths Pico EF preamp/envelope follower modules (first-rate quality out of Latvia, some modules also flickering in and out of distributor listings at the moment, by the way).

I recycled some scrap acrylic sheet as temporary filler panels—you can’t leave open spaces for wires to accidentally dangle into unprotected connectors!—so it’s an ugly duckling for the moment. If I relocate the modules to their planned locations in “justAddsInstead“, here’s where we are relative to the plan on Modular Grid:

This layout would require filler panels wherever the shaded areas are, so it can wait on the arrival of more modules. Meanwhile, I’m on a happy learning curve, putting these circuits through their paces.

The ability to route signals among the various functional subsystems—”patching”—is what makes modular synths so flexible. You can send a signal from one module to several others, using either “multiples”—one jack in, two or more out—or special “stack cables.” You can swap out an existing module for a different one—either for repair or to add new capabilities—without soldering new electrical connections. You can change the equipment arrangement to suit your patch style or workflow. And you can add modules indefinitely (visit Tone Tweakers’ Synth Sanctuary page for an example), or at least until you run out of space or cash.

You can also complicate the hell out of everything and end up with a colorful snarl of cords. But if you invest in one of these instruments, you will experience a fundamental truth about modular synthesizers:

That’s one item that never seems to come off the shopping list.

I’ll post a follow-up once I get through the initial test phase and have some interesting sonic output. Hopefully, not long…