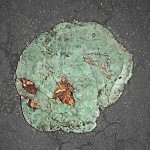 Serendipity. A word learned from my father on a—very rare!—fishing expedition in a rented boat. On a more typical Saturday, we’d be flying in a rented Cessna 150 somewhere over the Miami-Whitewater Forest in southwestern Ohio, or waiting around on the ground, or just hanging with the neighbors. But once in a while, there’d be a different sort of opportunity, one a little more premeditated. We’d take out flashlights and dig up worms the night before—never any shortage in Cincinnati that I recall—and jump into the car early to get a boat (precisely where, I can’t remember now). I’m glad we never had to depend on the meager catch we got, which usually amounted to only a bluegill or two. But I remember learning this word alongside my brother, on the water with my dad: one of those rare moments that sits like a storied gemstone in my mind, enduring and precious beyond mere measure; no doubt imperfect in some way; a thing that happened…and now just is.

We learned that day a name for finding pleasure in small chances, essentially unknowable and necessarily unexpected. Incidental things, not quite aligned with Destiny nor inescapable as Fate. I never heard anyone in my family say “everything happens for a reason”, not even prefaced with “I believe.” That’s not to say we didn’t go to church; but we did not grow up surrounded by faith in divine intervention or some other invisible hand. I grew up during the Cold War, and came to assume a Boolean future: dystopian/apocalyptic (which I thought most likely); or utopian/extraplanetary (characterized more as hopeful). But this idea, less ponderous and far less threatening, this…word…delighted us all.

Before we can articulate the thought, the Tao is clear to us as children: there will be chaos, and there will be order, and they will surround us in good times and in bad. Between them are the infinite paths we could take…and the one we walk. On it we find, once in a while, some thing worth bending down and picking up, to carry a short way.

Approach the sublime obliquely. Straight ahead lies Destiny, unshakeable and fatal every time. But nearer to hand, and a little to one side…serendipity!