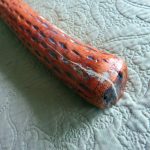 …in which repairs lead to forensics…

My wife calls it “the world’s best rain stick,” especially when it has gone temporarily missing from its usual place and she is hunting it down for some reason. It hasn’t had a “usual place” for a few years now, and “some reason” is most likely an impending rehearsal of a work scored for middle school band. The world’s best rain stick vanishes from the house for months at a time. Like many such things, it returns intermittently for safekeeping, or maintenance, or both.

On rain sticks in general

In case you’ve never met one, a rain stick is a percussion instrument indigenous to Central and South America. It’s made from a length of cactus branch, hollow–whether that is how it grows, or happens to it after it is cut, I do not know–with the thorns removed and then hammered back into the resulting tube from the outside. It’s then partially filled with small, round “beads”–pebbles or dried beans or seeds–and sealed with end caps cut from the same cactus material. 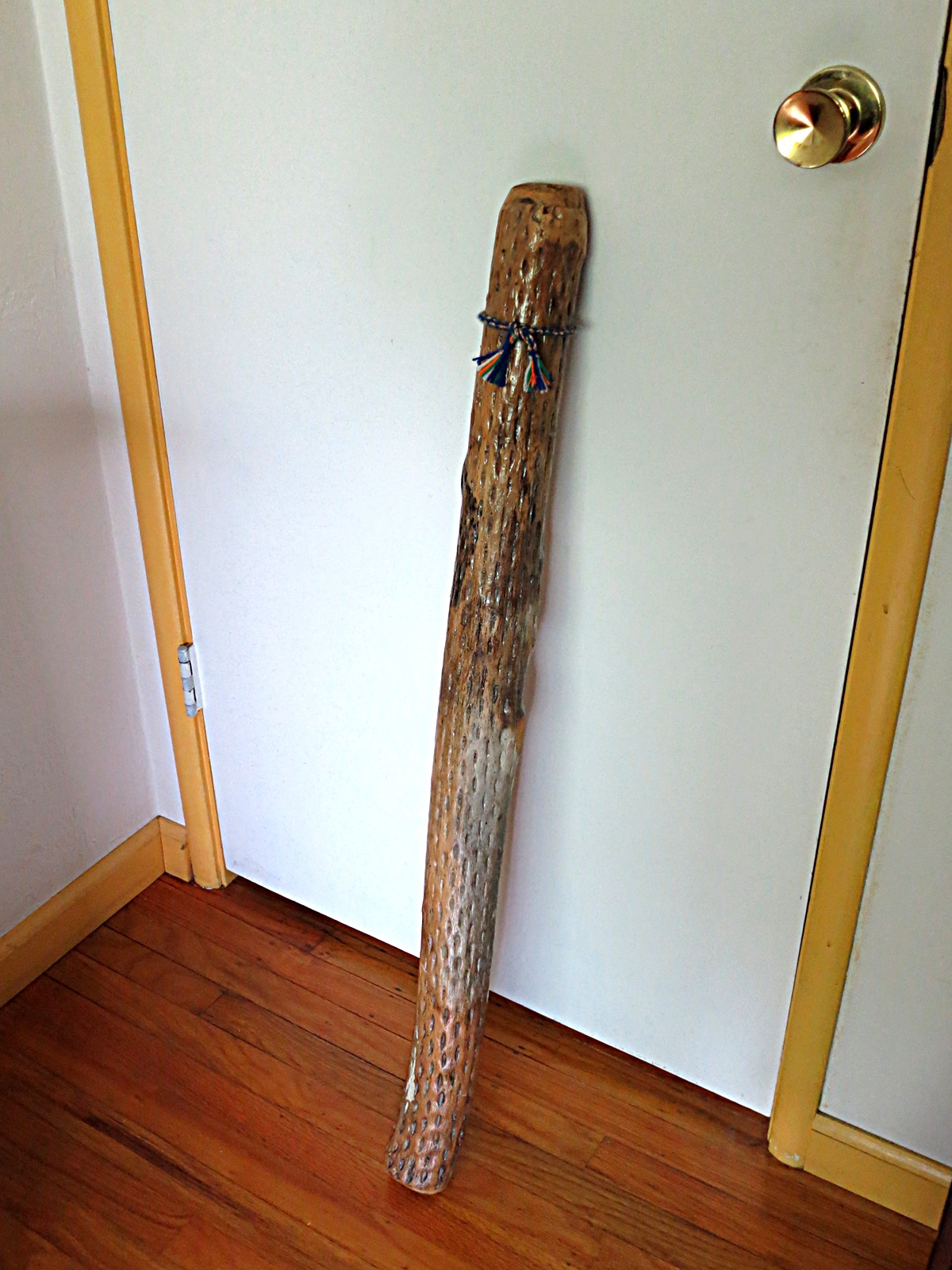 When the stick is tipped on end, the beads all fall to the bottom. Then, as the stick is rolled gently, shaken, or upended again, they crash into and bounce off the spines within, which vibrate like the tines of a thumb piano. Since the spines are all of a similar, short length, the pitch range is narrow and high. The collisions are just random enough that the sound is not unlike rain: sometimes a light rain, sometimes a brief deluge.

No Flash: The world’s best rain stick in action (mp3)

Perhaps to help with carrying it upright–or maybe to designate the “up” end for some reason lost to history–traditional rain stick construction is topped off with a colorful band of some kind. Most of the ones I’ve seen are broad, flat, yarn-wound or woven bands that are tied into shape but not bound to the stick. The band can usually slip around a bit. The knots used to cinch the band on are simple, and the ends of the yarn or strings past the knots often dangle freely. Though I’ve seen variants where a second band is added so a carrying strap can be attached, most sticks have just one colorful band. Ours was made of yarn, about three centimeters wide, and mostly blue.

The world’s best rain stick came from Guatemala (we believe, though it looks like the Peruvian or Chilean varieties often pictured on the web), and reached our home some time before Christmas 1991. My wife was working at a decorative rubber stamp company in Petaluma, California, where the arts-and-crafts trade-show circuit intersected the orbits of many buyers and sellers of imports, oddities, and what-have-you. The folks in the office put in a gift order to one of these outlets in the fall of 1991, and we received an assortment of ingenious articulated animal toys made of wood and leather along with the world’s best rain stick for less than the cost of a trip to the grocery store. 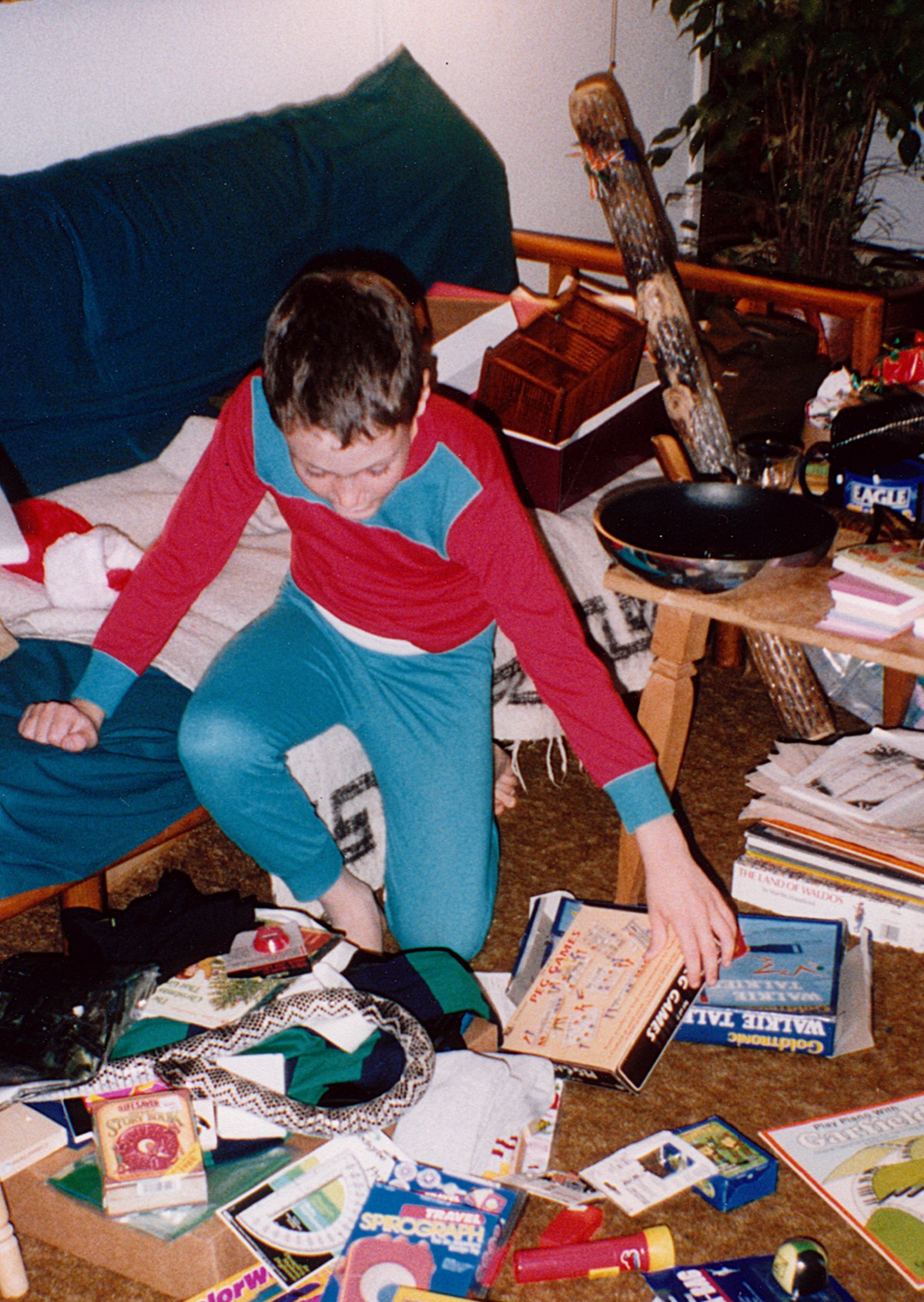 Here is our son Phil immersed in the pile of Christmas presents. At his feet is a handmade wooden snake. The world’s best rain stick is just to the right of center in the background. It’s not a great shot of the stick, but it’s the only one we’ve found showing the colored band in its original condition.

That day–Christmas, 1991–Mikhail Gorbachev resigned. When the news arrived in the US, we saw immediately who was responsible. Daughter Caitlin has just rounded up the mischievous snake. 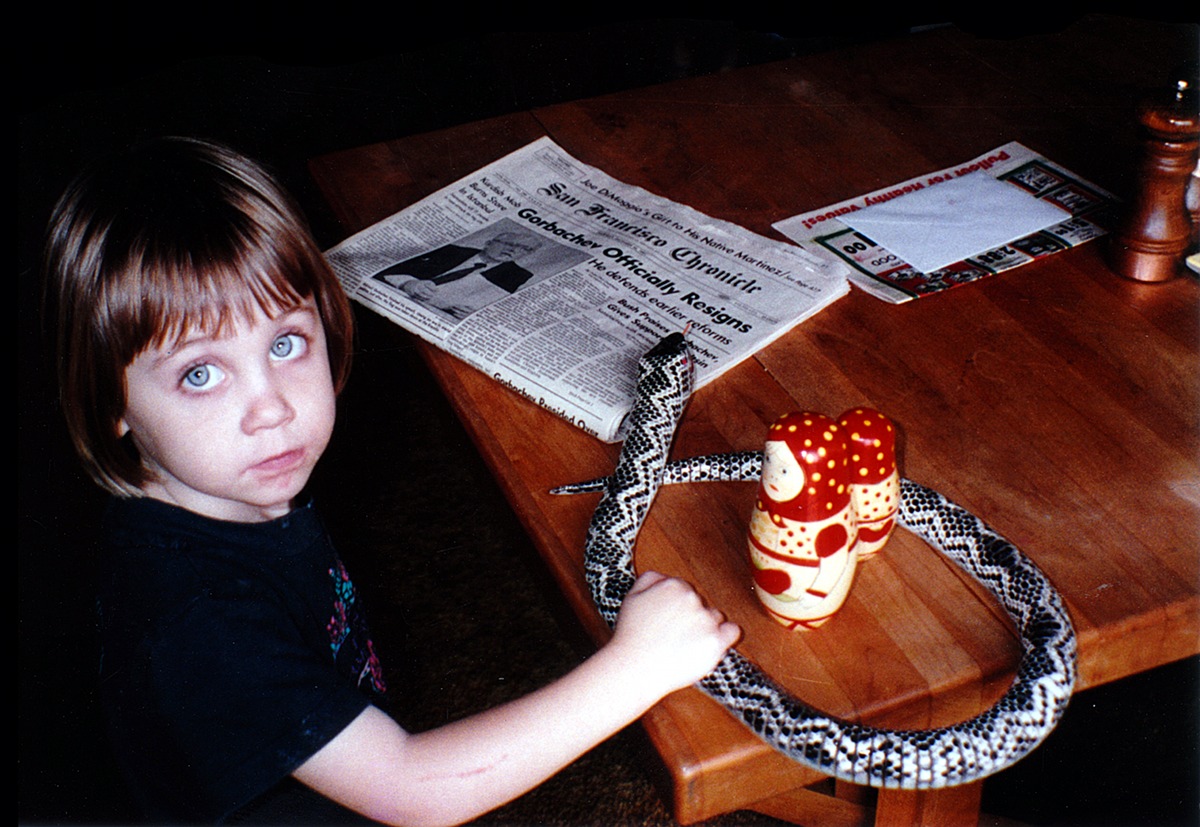 After being handled and sounded by each family member in turn, the world’s best rain stick found itself a home in the corner formed by a bookshelf and a wall. There, it tended to attract each new home visitor’s attention, probably just by being a long, varnished chunk of cactus branch with a colorful band around one end. It was a little puzzle. What was it? What was it for? When picked up, the stick always made a little noise as the beads inside shifted, inviting further motion and almost always leading to the upending of the stick and an unexpected shower of noise.

Following this first roar, a second, less surprised attempt was usually made, with rain-sound as the result. Then, after a few more experiments and a round of enthusiastic discussion about rain sticks and ethnic or indigenous instruments in general, the world’s best rain stick would find its way back to its corner.

Of course, some visitors were more appreciative than others. Often enough, these were children, and at first we worried about rough handling. It turned out not to be an issue at home. The world’s best rain stick is a pretty majestic specimen, and the sound was unexpected and magical enough that it inspired more awe than mischief.

No Flash: The second attempt is usually more sustained (mp3)

School is a different matter. At home, the stick is a household object belonging to your parents or your hosts, worthy of respectful handling; making noise at home also gets you noticed. At school, it’s like any other object, assumed to be a piece of institutional furniture placed there more for the convenience of your jailers than for you; and there’s usually plenty of camouflaging noise to divert attention. Music students can be a little hard on the rain stick.

Transport is also perilous. At almost exactly one meter, the world’s best rain stick is just long enough that, if carried sideways on the shoulders like a yoke, it will crack against one or both sides of a US-school regulation three-foot doorway. It looks like it might fit, but without a sideways turn at the last moment, it won’t. The same thing happens when it’s placed sideways on a rack of music stands or chairs. “Why not carry it upright?” you might ask. Why not wear a jacket when it’s cold out? Why not resist the urge to shove pencils and broken mallet sticks into the hole in the side of the timpani? Why not so many things…. And one asks “Why?” about some others. Why are you tapping the rain stick on the floor? Did you notice it’s cracked? Is that end cap loose now?

Last month, after returning from roadie duty at a school music competition–in the course of which I maneuvered the world’s best rain stick, along with a cartful of other percussion, through several dozen US-school regulation doorways–I declared a crisis. One end of the rain stick had a crack so wide that the little beads inside could be seen (they look a bit like peppercorns, or the Susuwatari–those animated dust motes in Hayao Miyazaki’s films). A few of the beads were actually wedged in the crack, hinting that others would soon be falling out. The colored band was partially untied and unraveling, a snarled mess. Worst of all, one end cap–the one without a crack in it–was quite loose and threatening an utter deluge of escaping beads, possibly during the rain stick’s very next public appearance.

Repair was not particularly tools-intensive. Some glue and wood filler–I decided not to squeeze the crack closed but to just fill it in place–and clamping with an old bicycle inner tube wrapped end-to-end after the cap was reattached took care of the mechanical issues. Gentle sanding and a quick coat of shellac a few days later finished the main job. 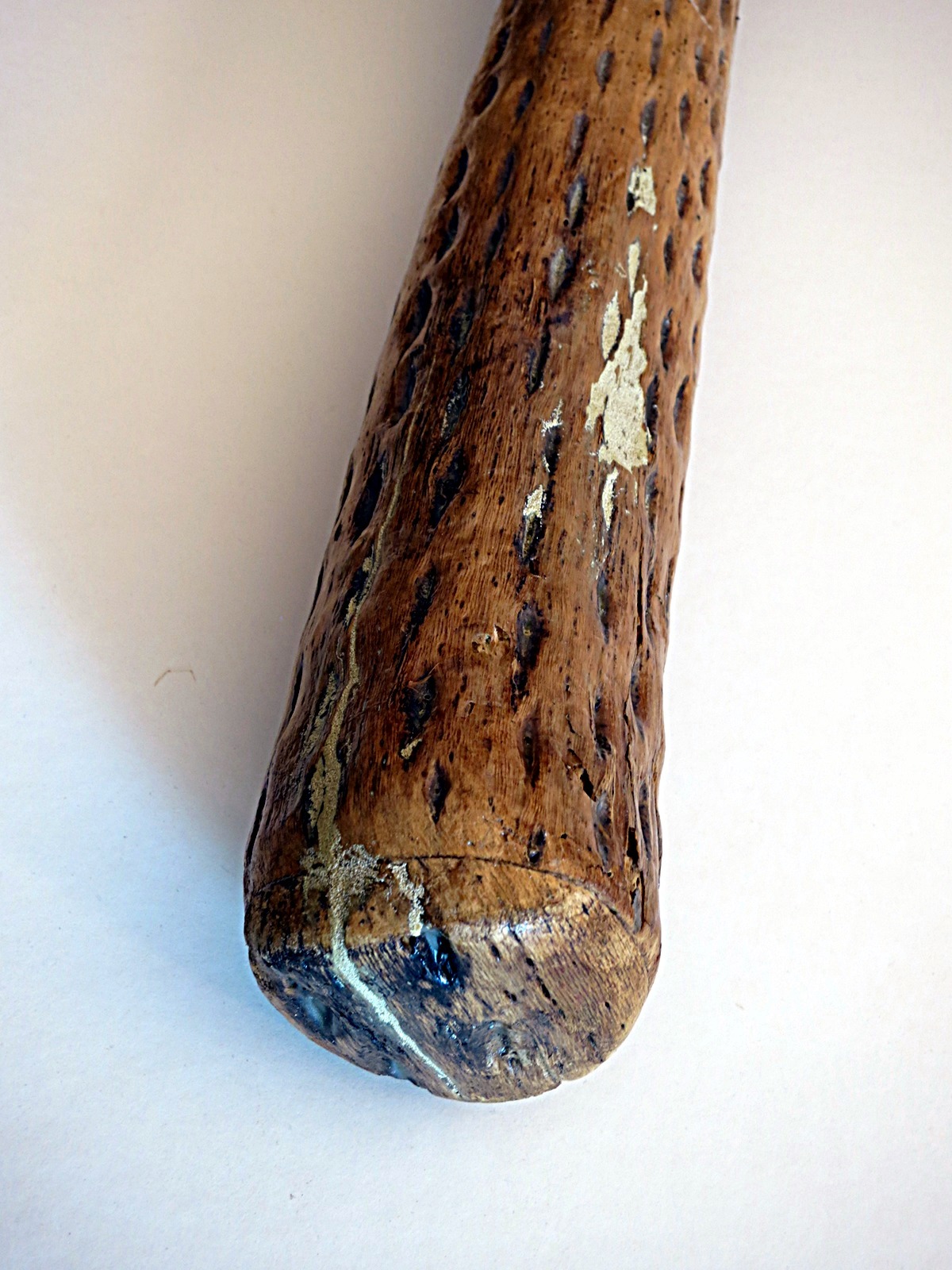 The few new scars didn’t detract much from the rain stick’s appearance. The original was, after all, a pretty rough piece of work. With the end caps now sealed and firmly in place, it sounded just fine and seemed unlikely to regurgitate beads at an inconvenient moment. All that remained was to resuscitate or replace the decorative band.

No Flash: A sustained sound from rolling the rain stick (mp3)

If the world’s best rain stick had had a disappointing feature when new, it was the yarn band, which seemed low on inspiration and of mediocre craftsmanship. It was now a full-fledged disgrace. The yarn was partly unknotted, and the majority color–a dime-store variety blue–was unspooling itself from around what appeared to be a black plastic strip underneath. The orange, white, and green accent yarn was only woven through the blue near the center of the band; the rest of the yarn had just been wrapped around this strip.

There was plenty of yarn, and I decided a braided rope with tassels would look better. It would also allow me to rid the instrument of the most obviously out-of-place element–this plastic strip. Plastic–really? A few hours of trial-and-error got me close enough to my YMCA summer camp lanyard-making memories to pull off a respectable yarn rope that didn’t look out of place. 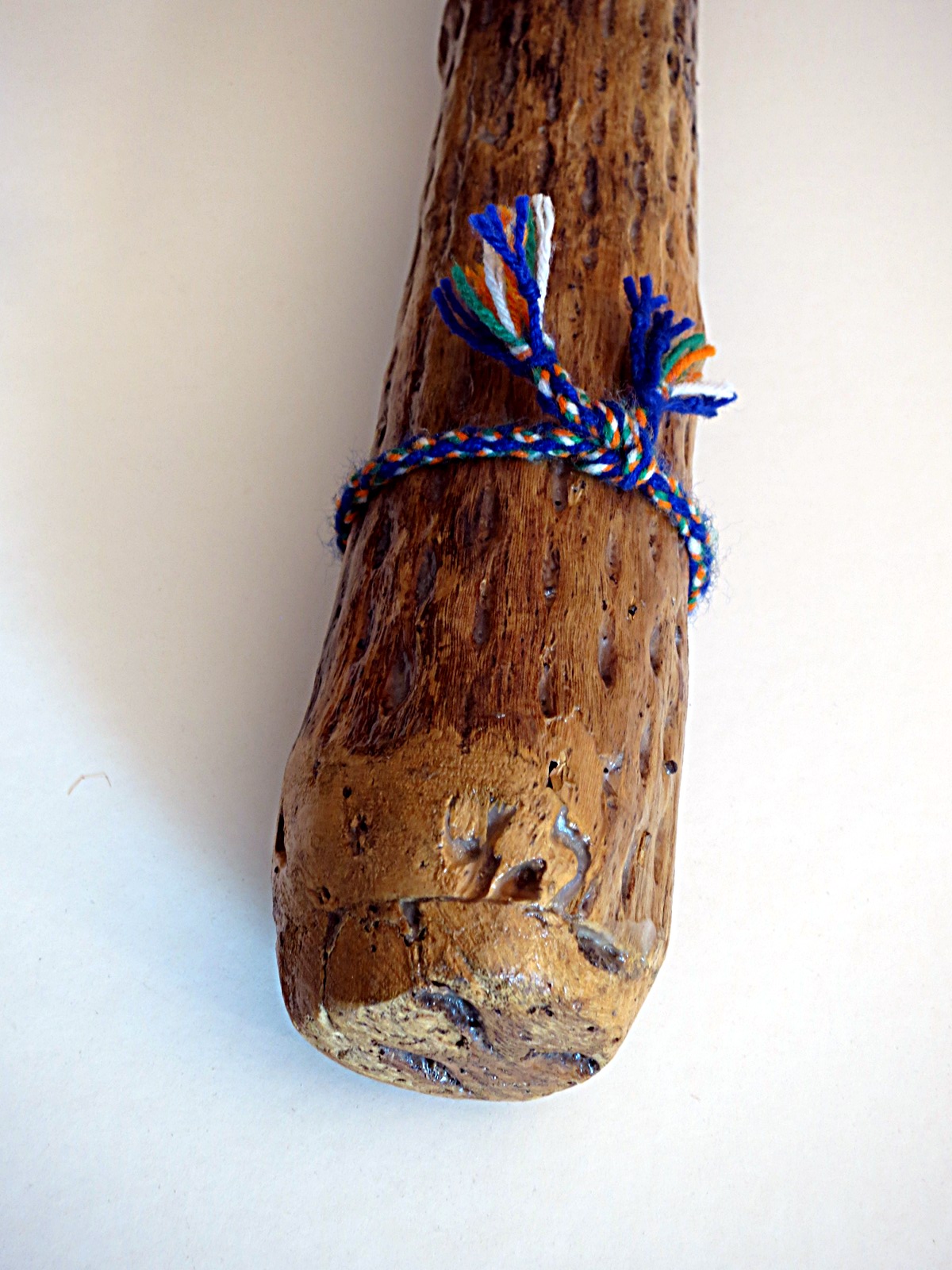 Before discarding the plastic strip, I took a close look at it. I’d already noticed it was a little irregular in color and seemed translucent in some areas. I’d chalked it up to wear or maybe wrinkling of the plastic. On closer inspection, it was more interesting. 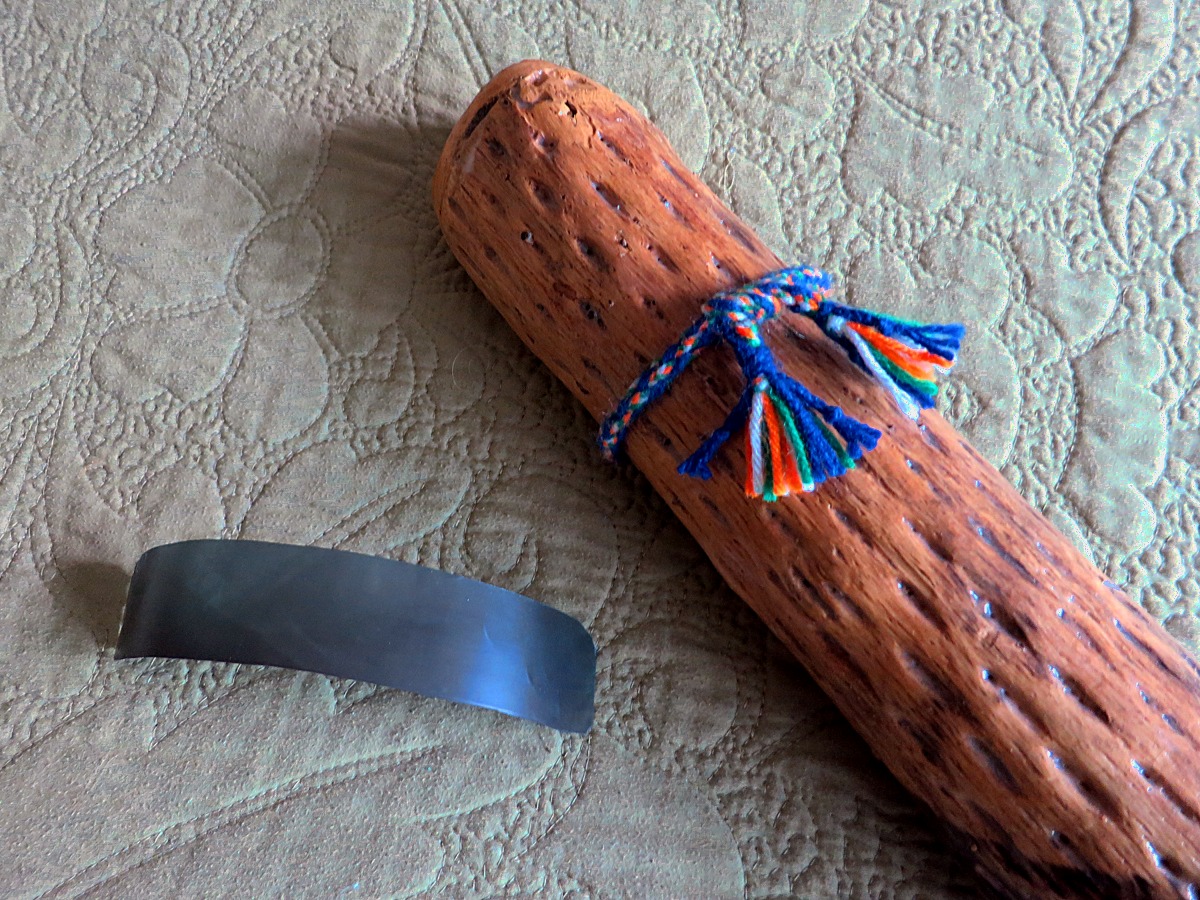 The plastic strip from inside the band was repurposed, exposed x-ray film. Here’s a close-up of the film with a ruler for scale: about 16 cm, or 6-3/8 inches. It is very roughly cut.

This discovery conjured up many, many thoughts in a rush: the incredible ingenuity of cottage industries in poverty-stricken corners of the world; the migration of artifacts along established trade routes and, with them, traditions and culture; the disastrous state of Guatemala and so much of Central America in the previous decade, and the US role in it; how important an x-ray image might be, in the right hands, at the right time, to a single person.

The image itself is just a piece of a ghost. I can’t make out anything vaguely human. Yet there it is: a little hint, a wisp of memory; a message in a bottle, hidden in the world’s best rain stick for twenty five years; a random image, like rain, delivered at last to unintended eyes, unable to read it in its language or grasp its meaning. In the global economy, we are all alien archaeologists at times, looking at the remains of the once-living: this laptop, a little girl’s mother in a Chinese factory; this concert, a little boy sweeping shavings from the floor of a home workshop; the sound of rain, a doctor in a jungle.

The world’s best rain stick is back in business. For the summer, it will “cure” in my studio, relatively unmolested. I may use it from time to time; we do still need the rain. In the fall, it’s likely to make its way back to school for another brush with disaster, delighting yet one more generation of middle school band and orchestra students.

But I am thinking about reworking the band one more time. Maybe I’ll get some craft string or something else a little less Dacron than the old yarn. Maybe I’ll work the old yarn in and just add something a bit more classy–or at least more sturdy. But, having written this, I feel the plastic strip should be returned. I never intended to take the mojo out of the world’s best rain stick.