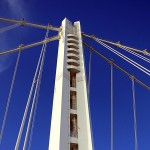 My friend Martin and I conducted wikiGong’s first recording of the new eastern span of the San Francisco–Oakland Bay Bridge in November 2015. I’d wondered about the Bay Bridge for a while: after the Golden Gate, it seemed like the next most promising gong candidate and field recording target in the Bay Area. But the original 1930s structure had little in the way of obvious, legal pedestrian access and until 2013 the only suspension span was to the west.

The new eastern span promised to change that, with both a self-anchored suspension design and accessible pedestrian and bicycle path. The ongoing demolition of the original eastern span suggested interesting photo opportunities. The usual question—Does the bridge make any interesting sound?—was on our minds, but after recording the voices of a few large bridges we expected there’d be some there there. And indeed there is.

Bay Bridge Assay 1: getting there

Bridge walks tend to be somewhat extended adventures—beginning with breakfast, often lasting into the late afternoon—so why not begin your audio survey of the Oakland end of the Bay Bridge from about as far away as you can get and still see it with the naked eye? We drove up the other side of the peninsula to Twin Peaks and joined throngs of tourists near Sutro Tower in the late morning.

San Francisco’s iconic TV transmitter tower—reviled as an eyesore, revered as a landmark—overlooks one of the best views of the City by the Bay. Line-of-sight radio transmission is a challenge in a city of hills like San Francisco, and broadcasters covet the high ground just as visitors and residents covet the view. 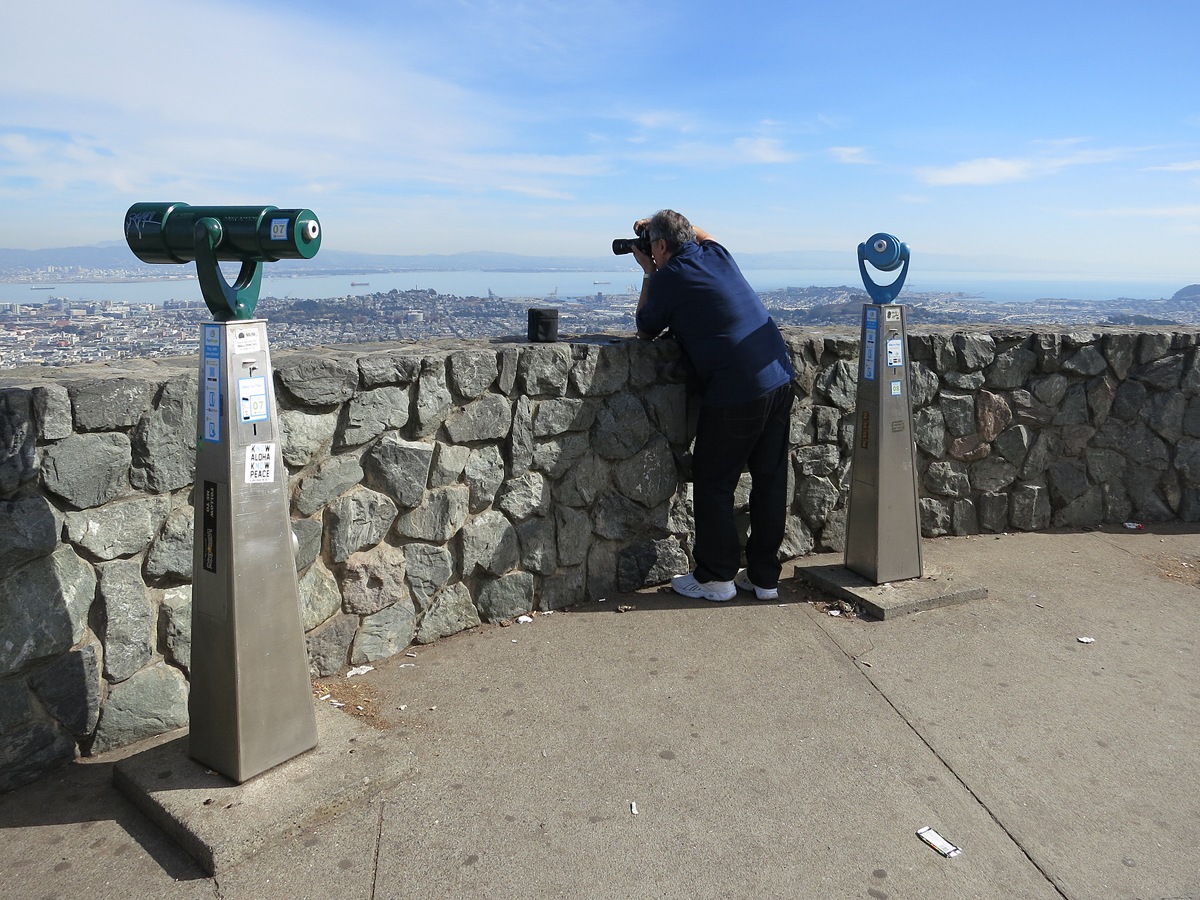 Testing some new optics was the prime motivation for starting on the west side of the bay. Here Martin finds a moment alone, looking east from where the tour buses stop for selfies. The installed pay-per-view optics offered little competition to his telephoto lens. 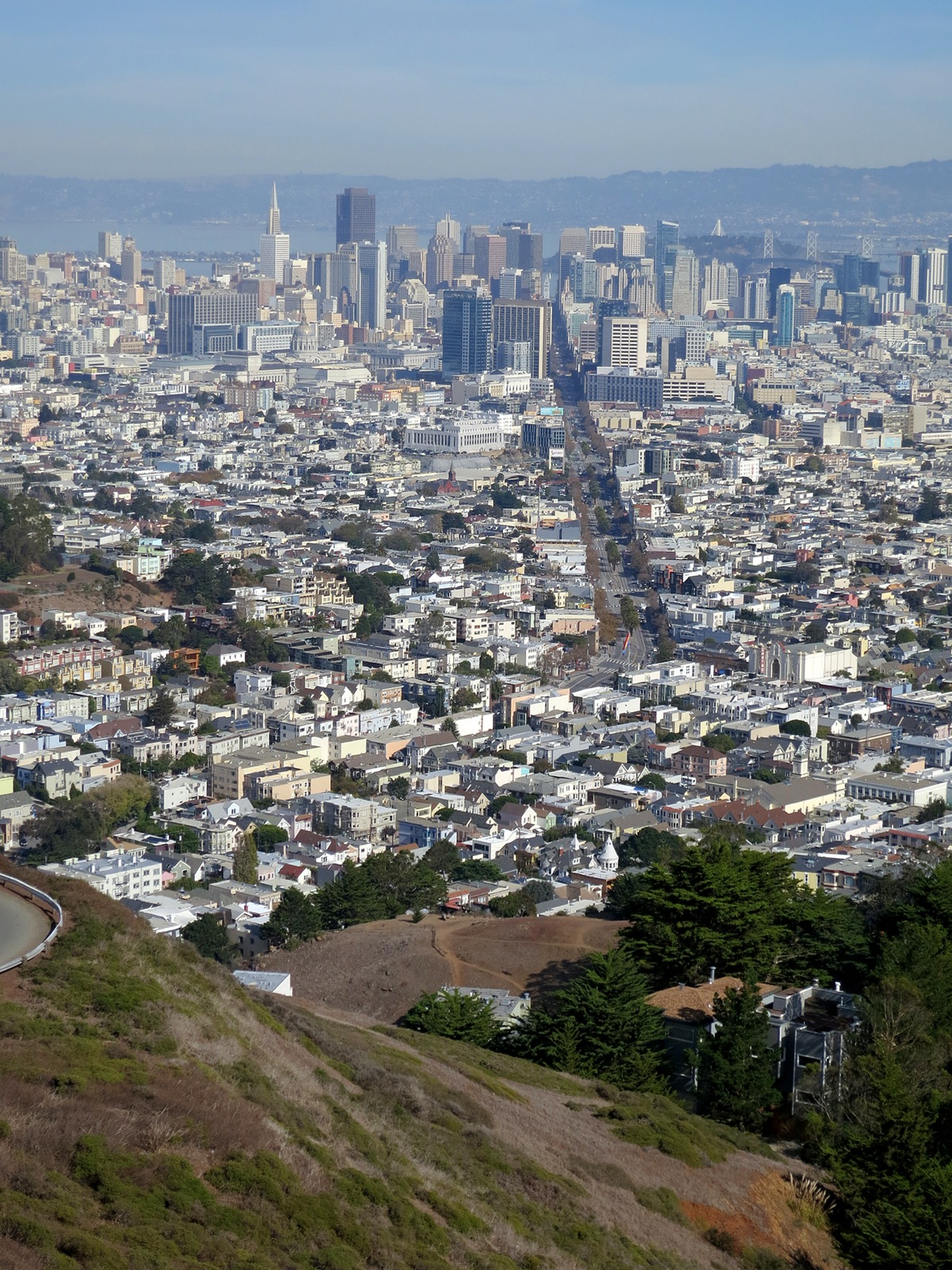 This is the view into the city from Christmas Tree Point right up Market Street. The suspension towers of the old western span of the Bay Bridge can be seen near the top right, with the bright white tip of the mast of the new span appearing just above and a little to the left of them, past the green hill of Yerba Buena island. 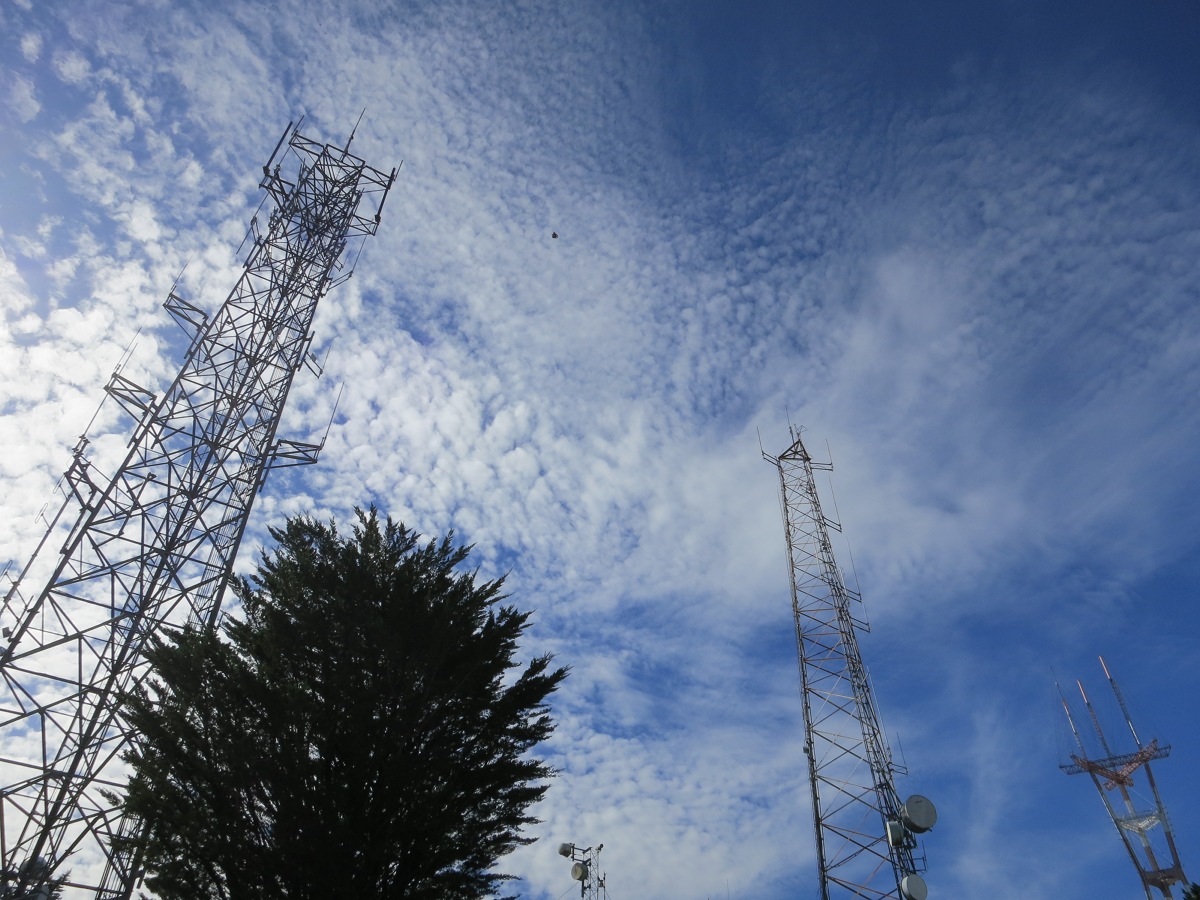 Turn around, and the masts of the Twin Peaks broadcast antennae present a similar perspective. 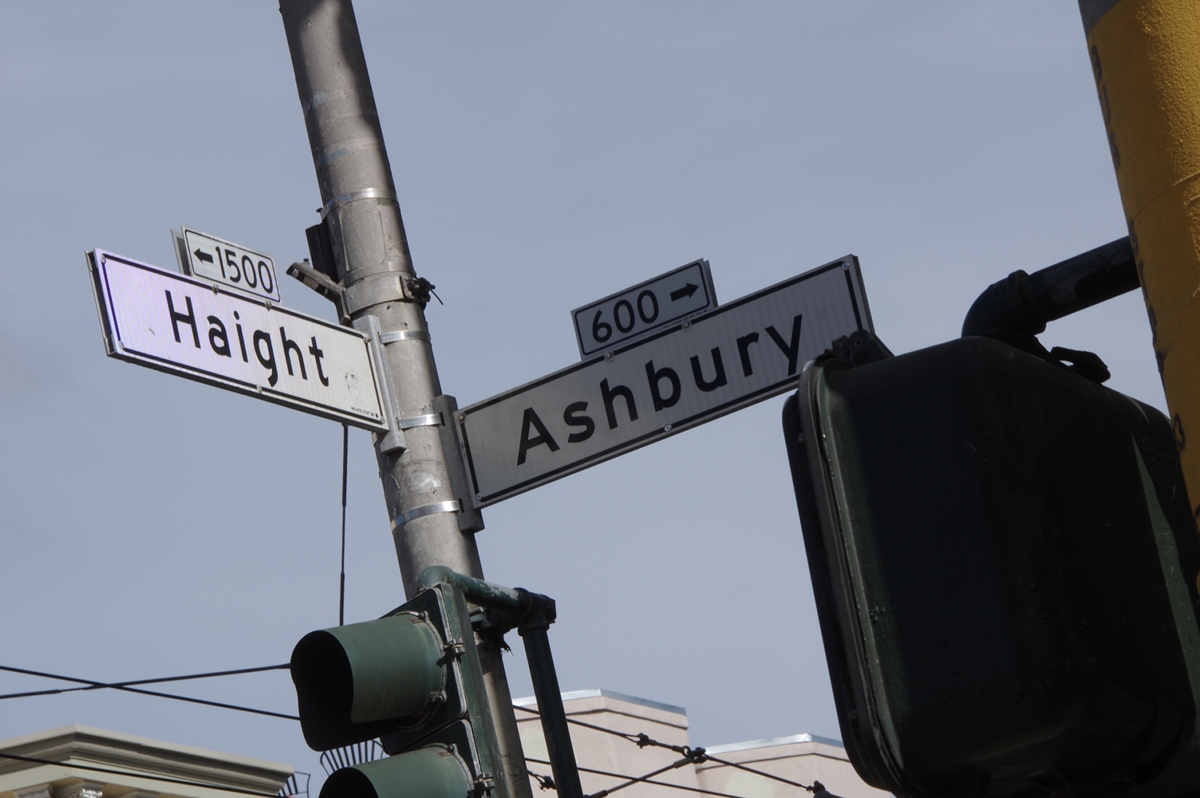 Let’s leave it to the imagination: down the hill, through the Haight, and across town; over the lower deck of the old span to Yerba Buena Island and then on to Oakland over the new span; somewhere along here, we discovered what three years without updates means to a Garmin GPS, and a brief tour of Emeryville ensued….

Pedestrians in the Port of Oakland

As of November, 2015, the trailhead access point recommended for cyclists is at the IKEA store in Emeryville. But one can also drive closer to the span—taking care to watch out for long lines of container trucks waiting near the port—and embark at 345 Burma Road in Oakland. There’s a parking lot there, reached by traversing a little maze of chain-link fence and temporary traffic barricades. 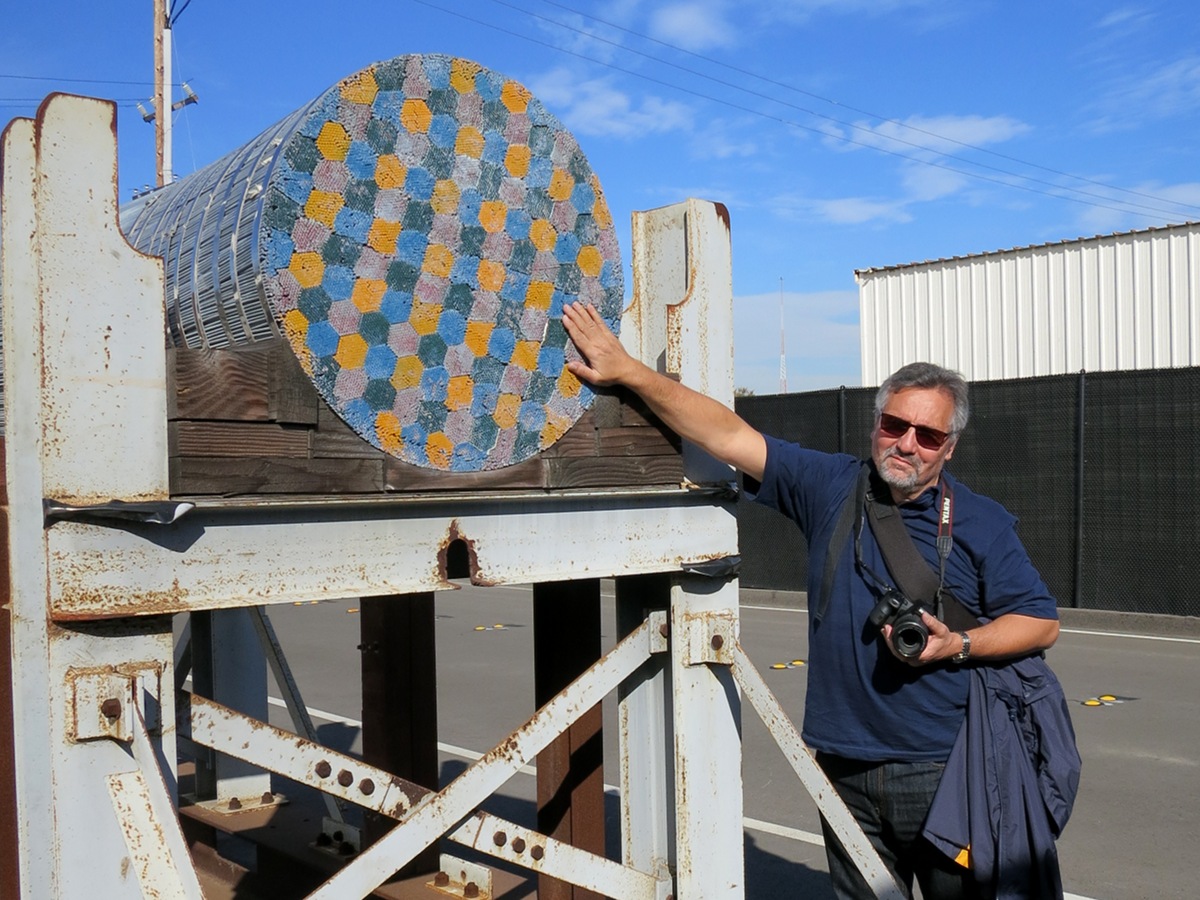 A number of artifacts from the new span’s construction are still lying about near the paint yard just behind the parking lot. Here Martin takes a break from loading film and provides a reference for the size of the main lateral cables and their composite bundles, painted for educational purposes. 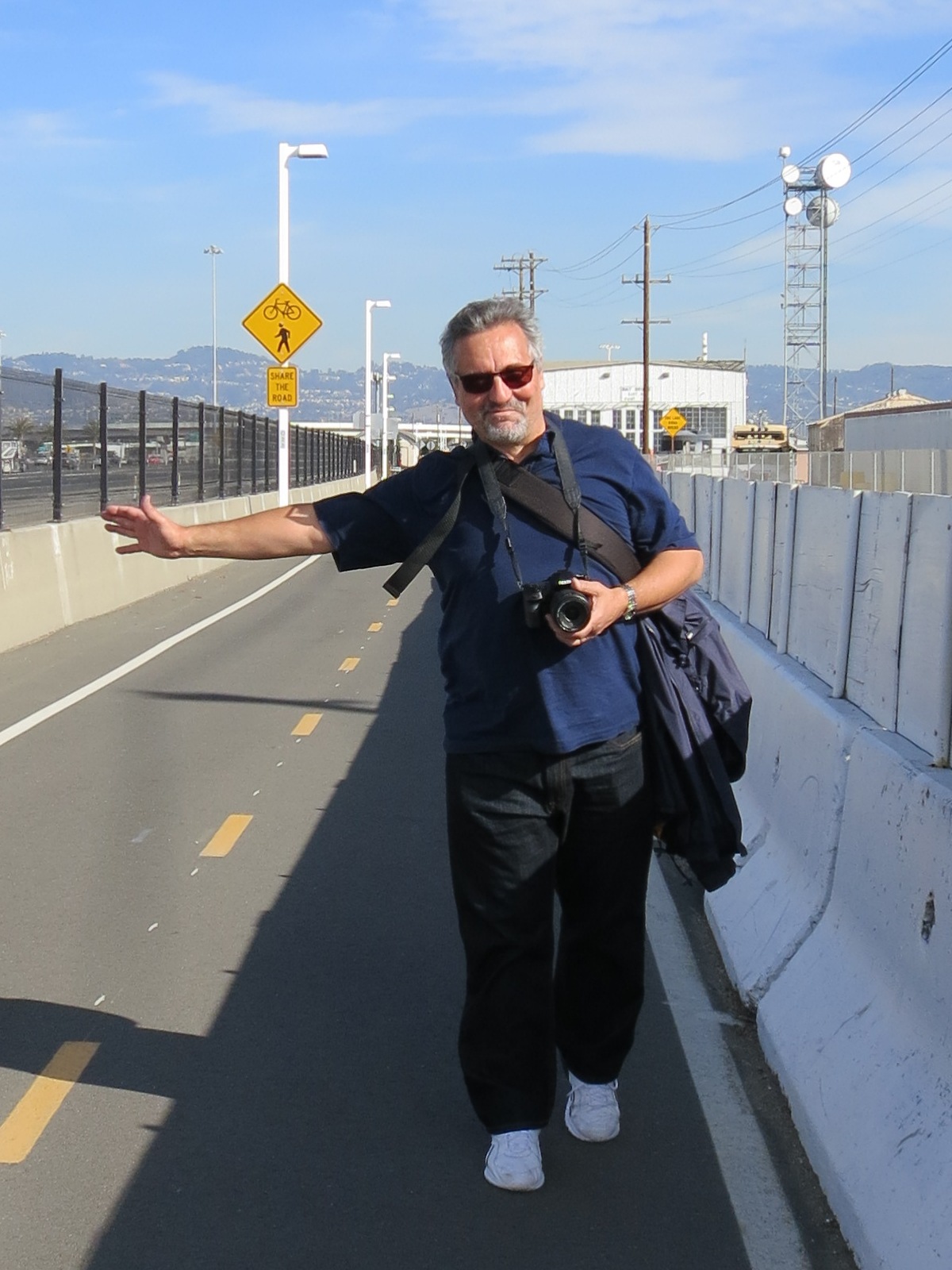 From the Burma Road trailhead (so non-rustic it’s hard to call it that), it’s still almost two miles to the suspension portion of the span. Walkers share the narrow path with cyclists—most of the police officers we saw were also on bikes—and even on a weekday there’s a fair amount of foot traffic. Martin once more thoughtfully provides the scale, while the (microwave?) tower in the background at right hints again at the Radio Age we live in. 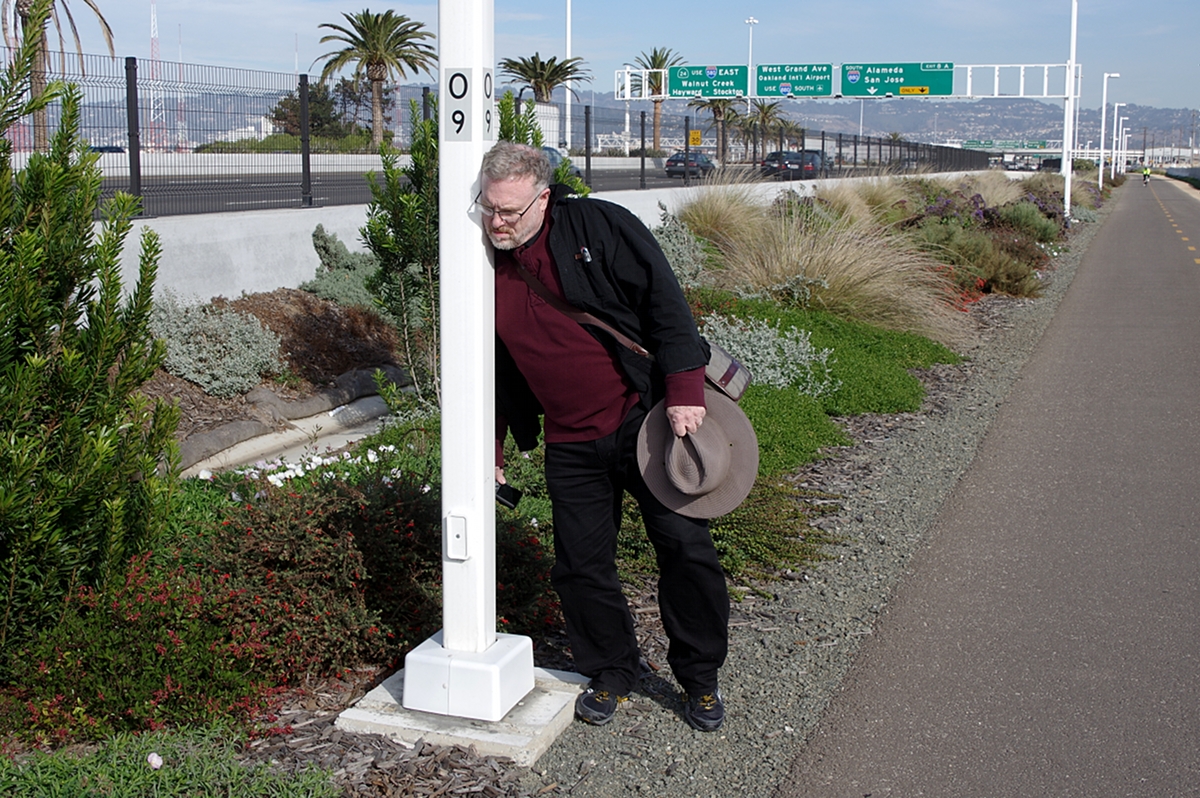 A bit further on I stopped to check out the conventional lampposts along the path and to set my own expectations. A windy day might mean mostly wind sounds, or clicking and creaking; heavy traffic would change the balance. There was nothing particularly compelling to capture here, and we moved on. 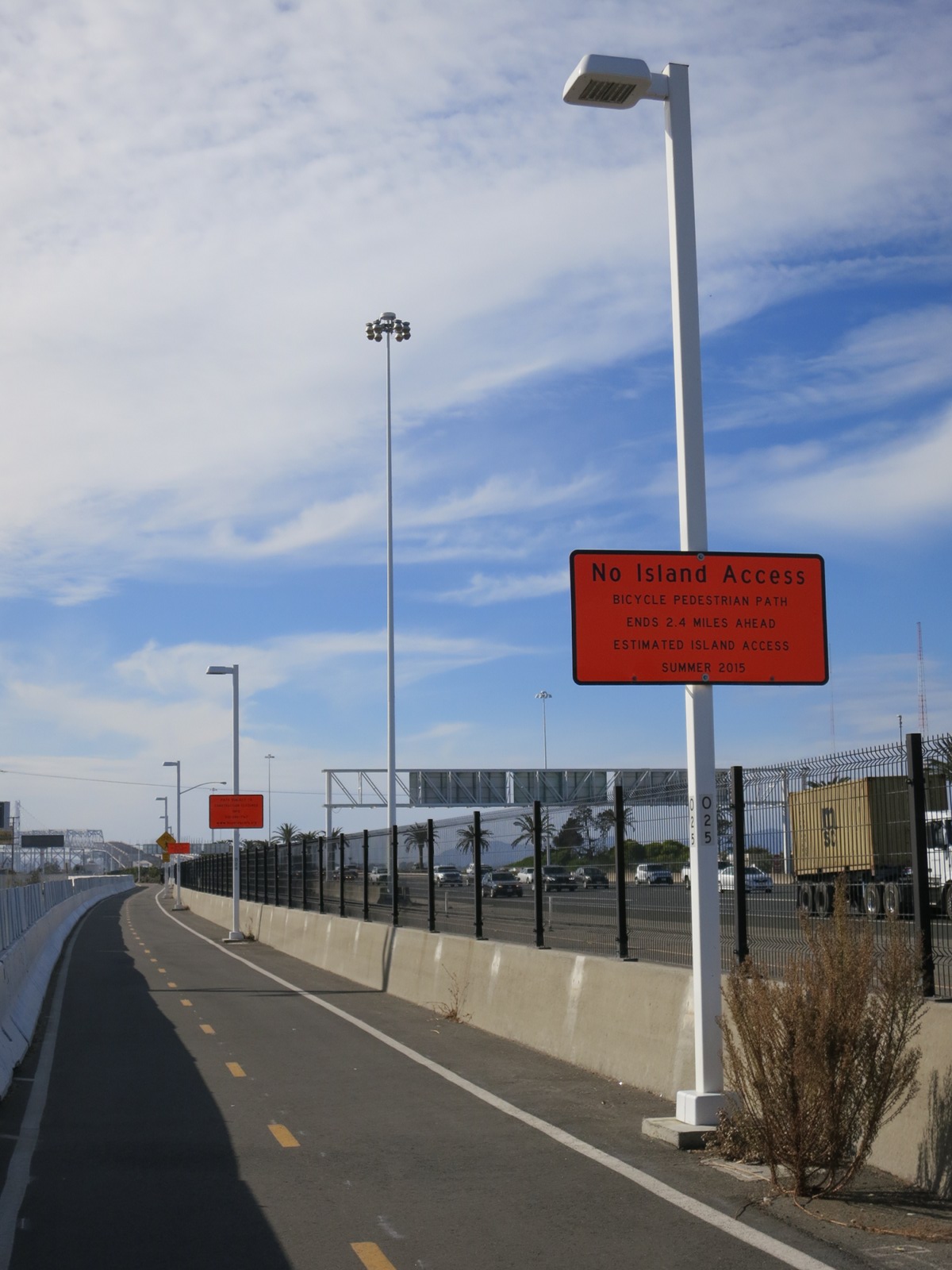 Predictions are dangerous, especially those about the future. Someday, visitors will be able to walk clear to Yerba Buena Island. November 5, 2015 was not that day.

Bay Bridge Assay 1: being there 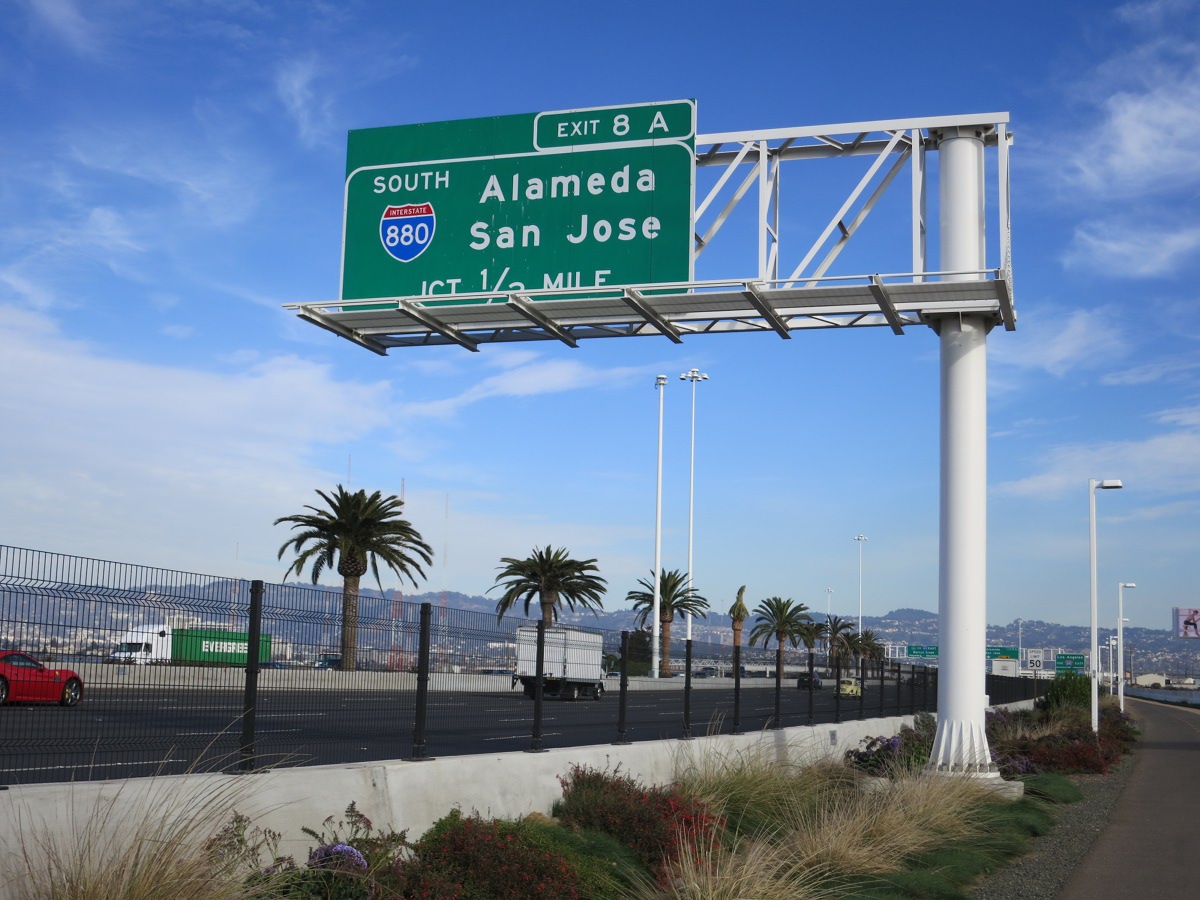 This signpost stands just off the Oakland-side pedestrian approach to the new span. The sign suggests the answer to a fifty-year old question. The tubular post is sonically active—stimulated by wind and traffic—but its sound is not particularly distinctive. 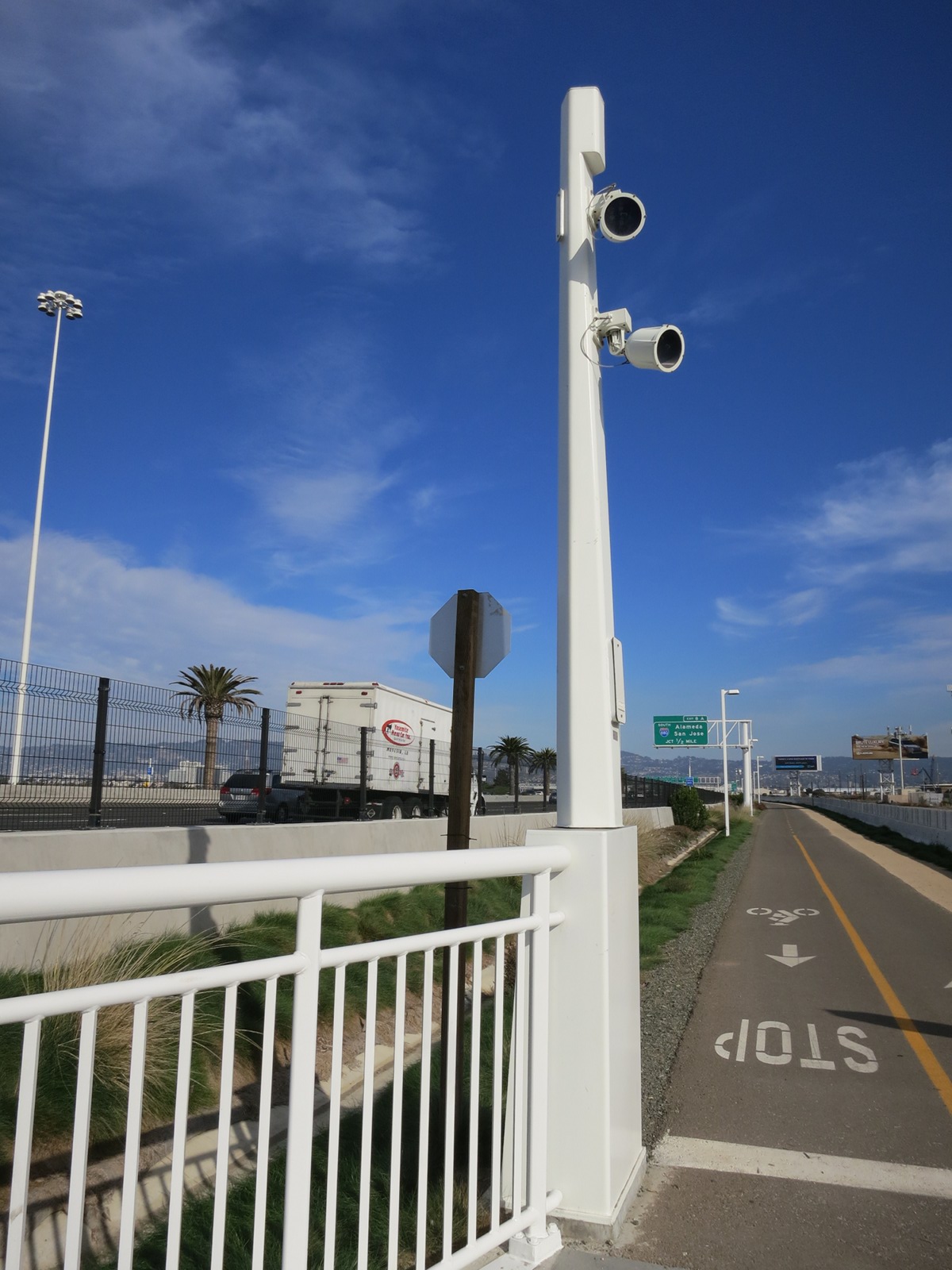 The new Bay Bridge light poles, on the other hand, are distinctive in several respects. The supports themselves are tapered, pentagonal prisms. Both lamps and surveillance cameras appear to be mounted inside directional, “pill-shaped” housings. Dozens of these poles sprout from the median and roadway barriers to form a short forest of white over the new span. 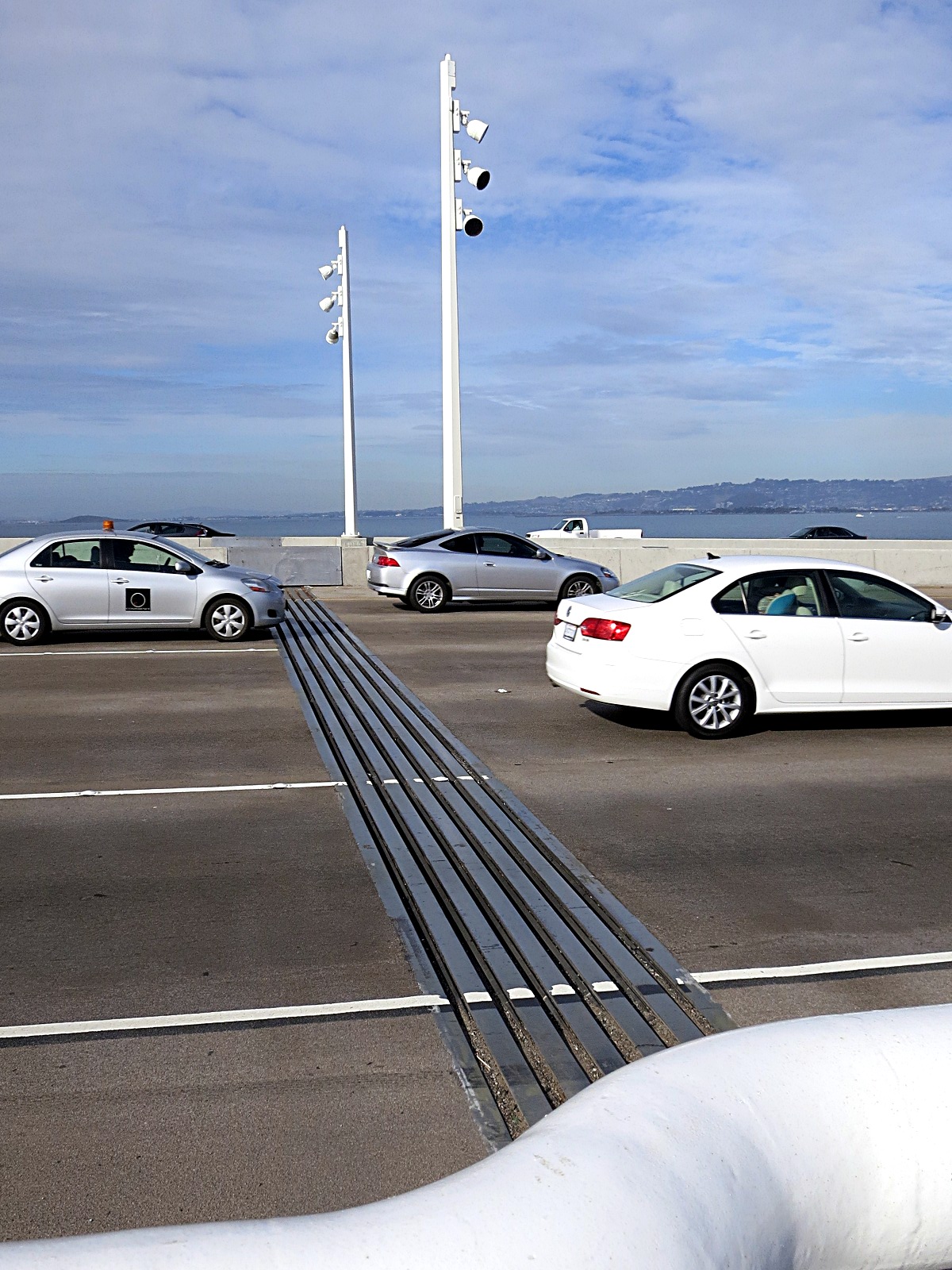 The expansion joints at the end of the new span double as “wake-up calls” for sleepy Bay Bridge drivers. The number of slats in these varied, as did the sound of tires passing over them. On the pedestrian walkway, these slats are covered by a coated steel plate (that’s the first recording, below). Note the increasingly tall pentagonal light poles. 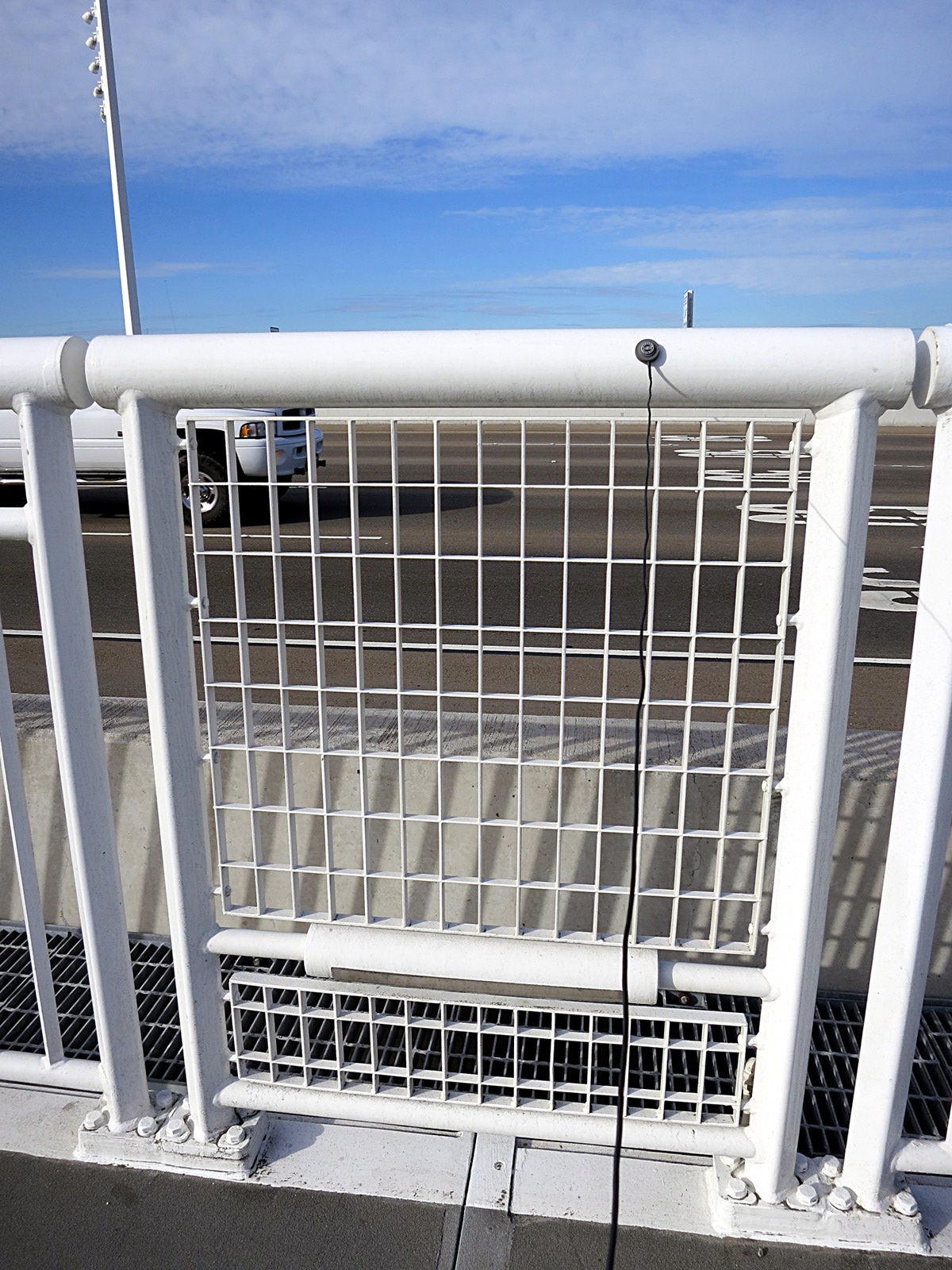 The new safety railings separating pedestrians from traffic are installed in alternating long and short sections. The sectional design is presumably to allow for easy replacement. Accidental damage is inevitable. Lamps to light the walkway are mounted low on the shorter sections. The Schertler contact mic is shown attached for recording. 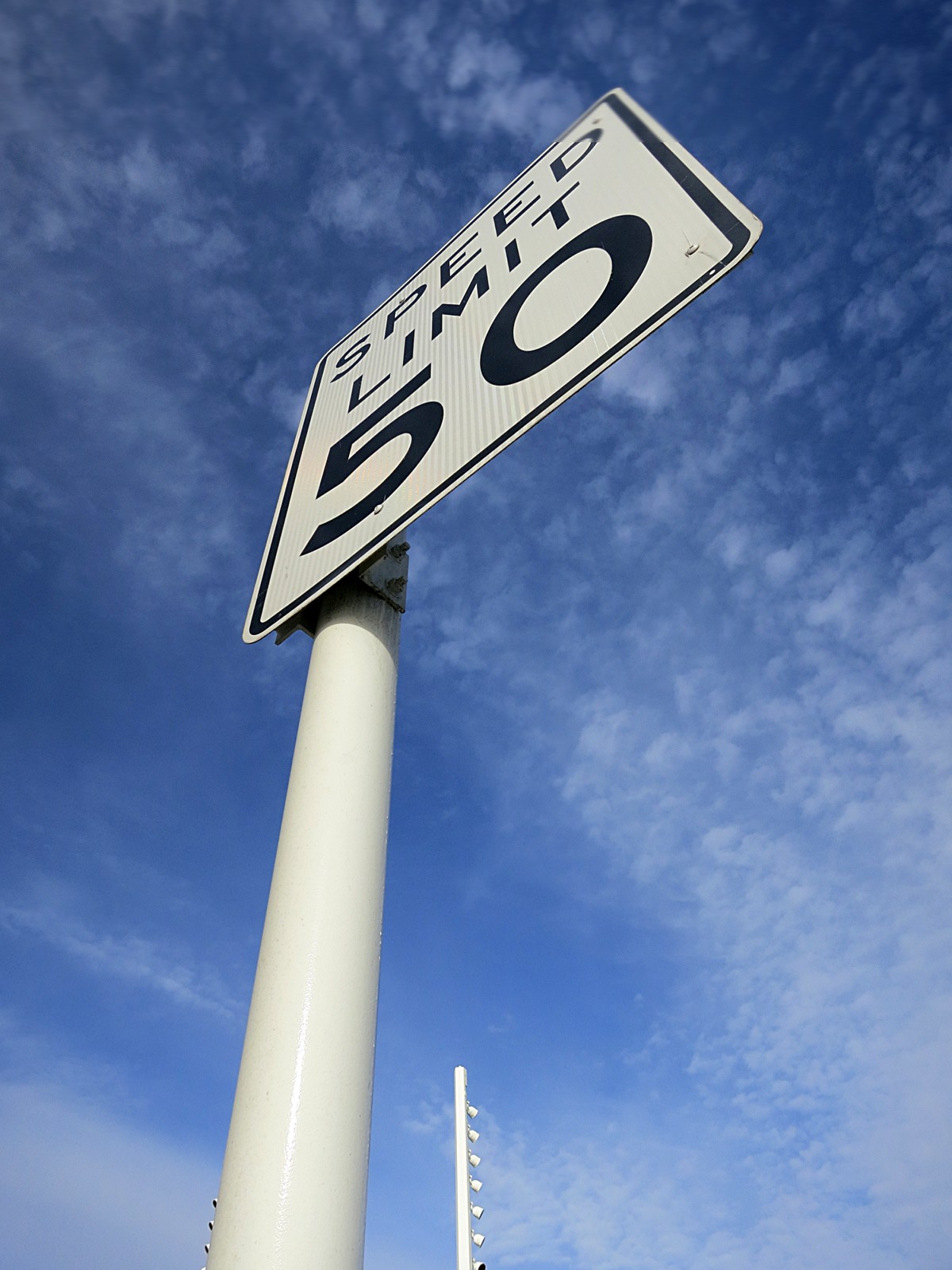 This speed limit sign is attached to the ramp leading off the Bay Bridge on the way east toward Oakland. 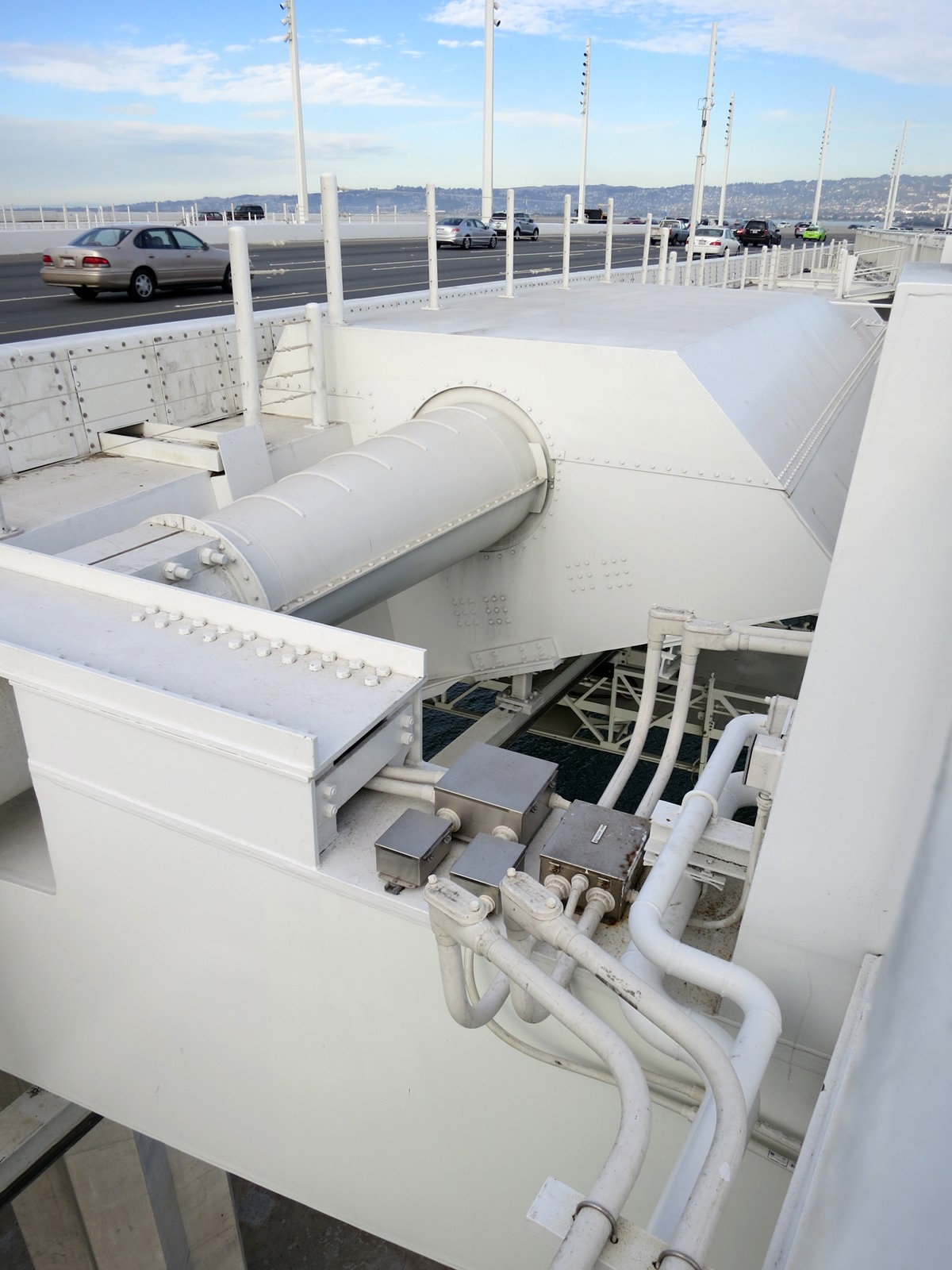 There are a few points on the new span—transitional zones—where every detail is exposed. This is one, a structural rat’s nest festooned with electrical conduit, splices, and junction boxes. The main cable seems to end nearby, though it’s difficult to say exactly where the actual termination is: perhaps the concrete pier, rising up from the bay at the extreme lower left. 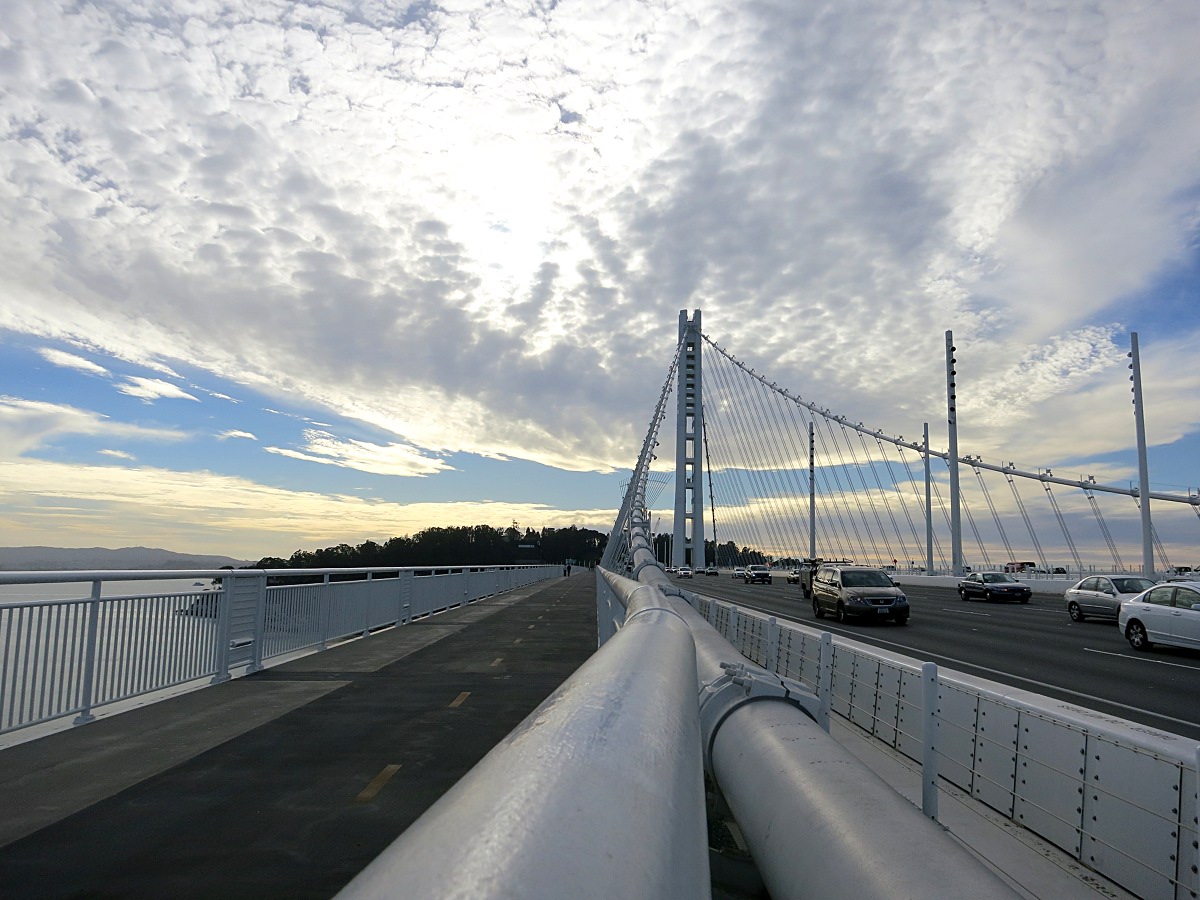 Looking west, we can see the main cables of the span arcing slowly upward to converge on the saddle. The same cloud types seen in the morning from Twin Peaks persisted above the city and out over the ocean.

In the previous photo, we saw how the main cable end aligns with the level of the roadway. This implies the first few trusses will be mounted directly to the cable itself, with no suspenders needed: just bolts, as seen here. (Note the jam nut arrangement.) 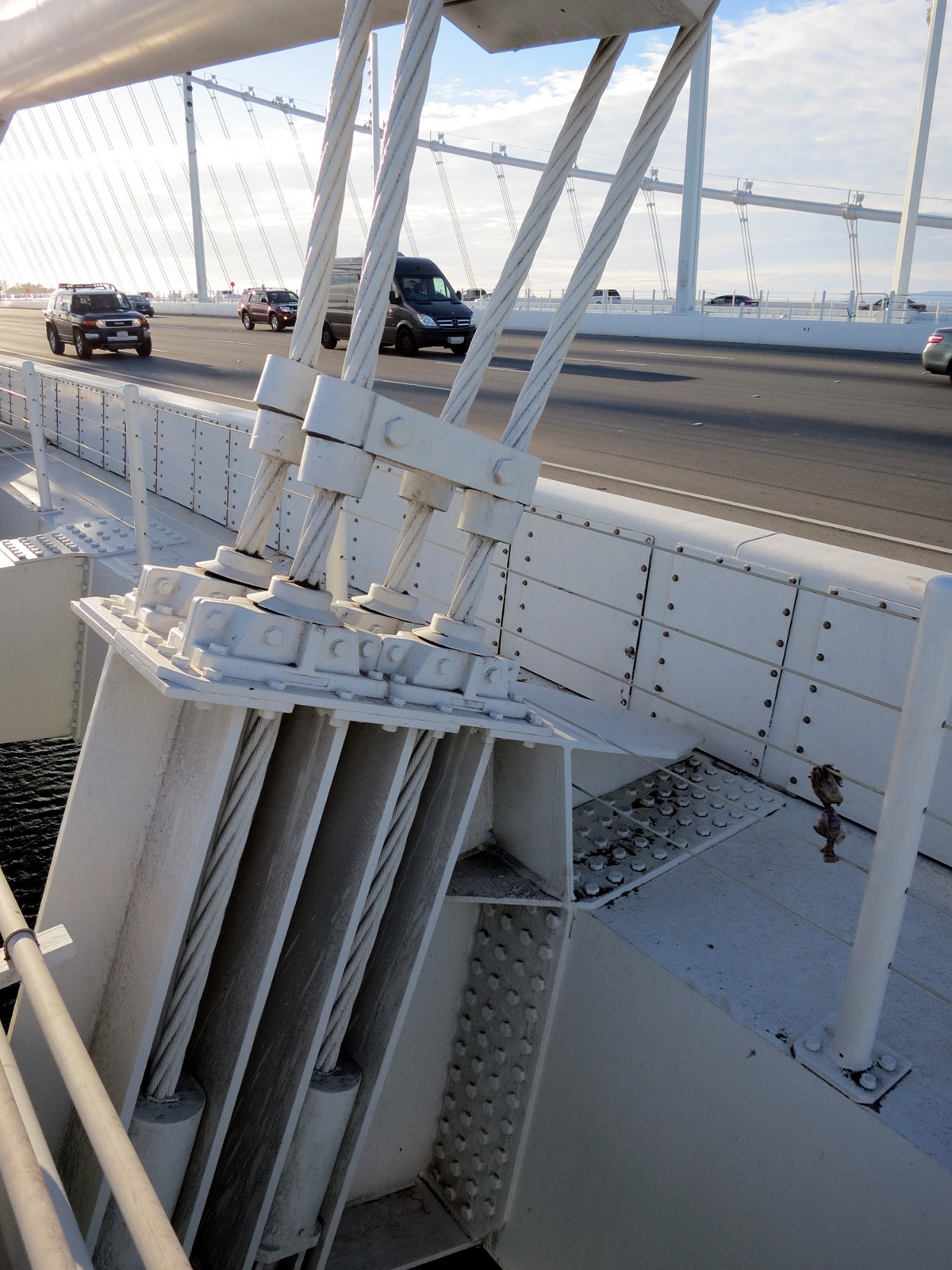 Finally, by the time the fourth and fifth trusses are reached, we find suspender cables. And here we had a bit of a disappointment: they are too far away to record easily. Between the height of the steel box truss and the cables’ angle relative to the safety rail, arm’s reach is insufficient. 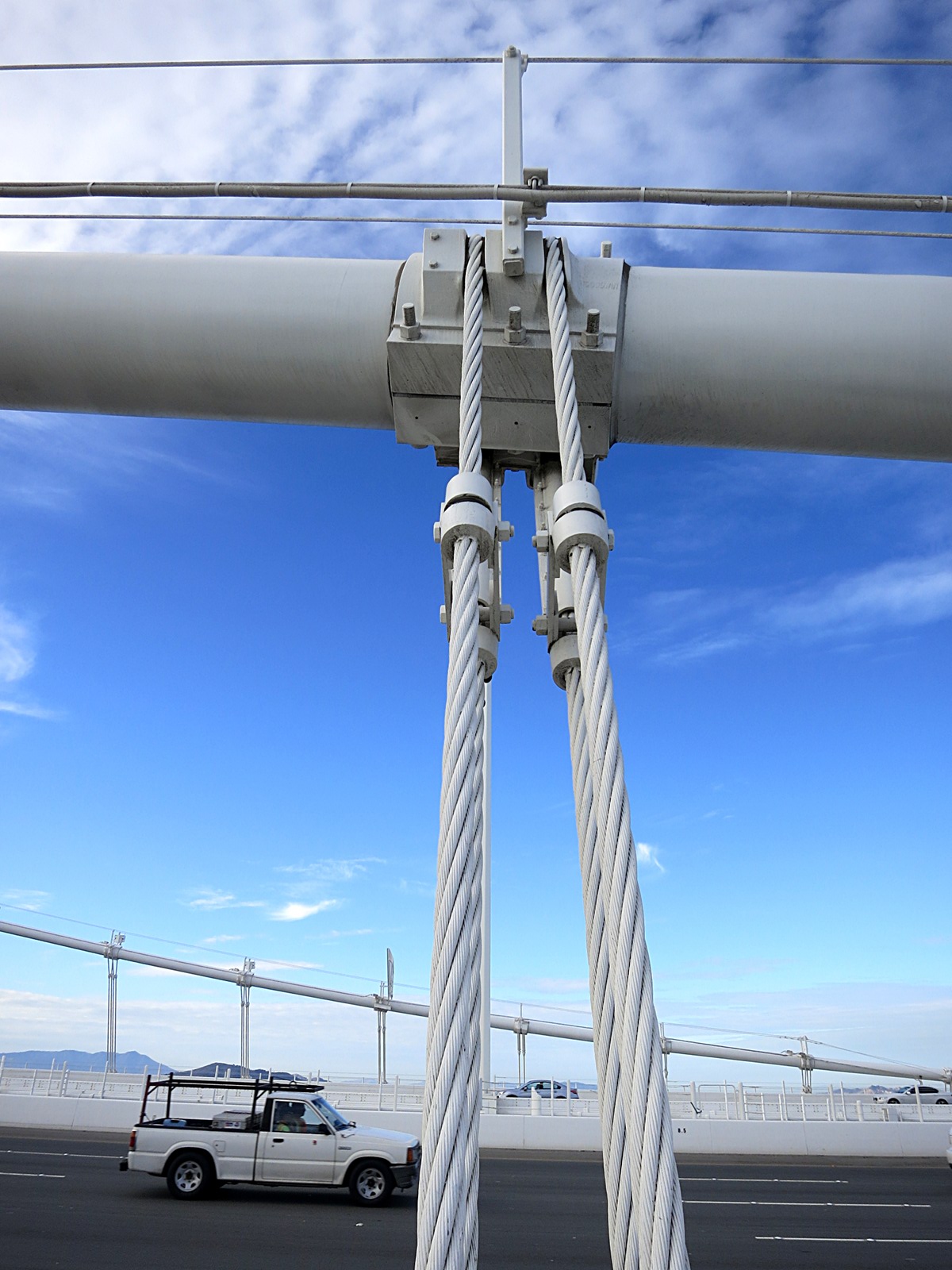 By the seventh truss we see a more typical suspender pattern. The cables still can’t be reached, however. The rest of the suspender recordings from this trip were made by attaching the contact mic to those portions of the truss closest to the safety railing. 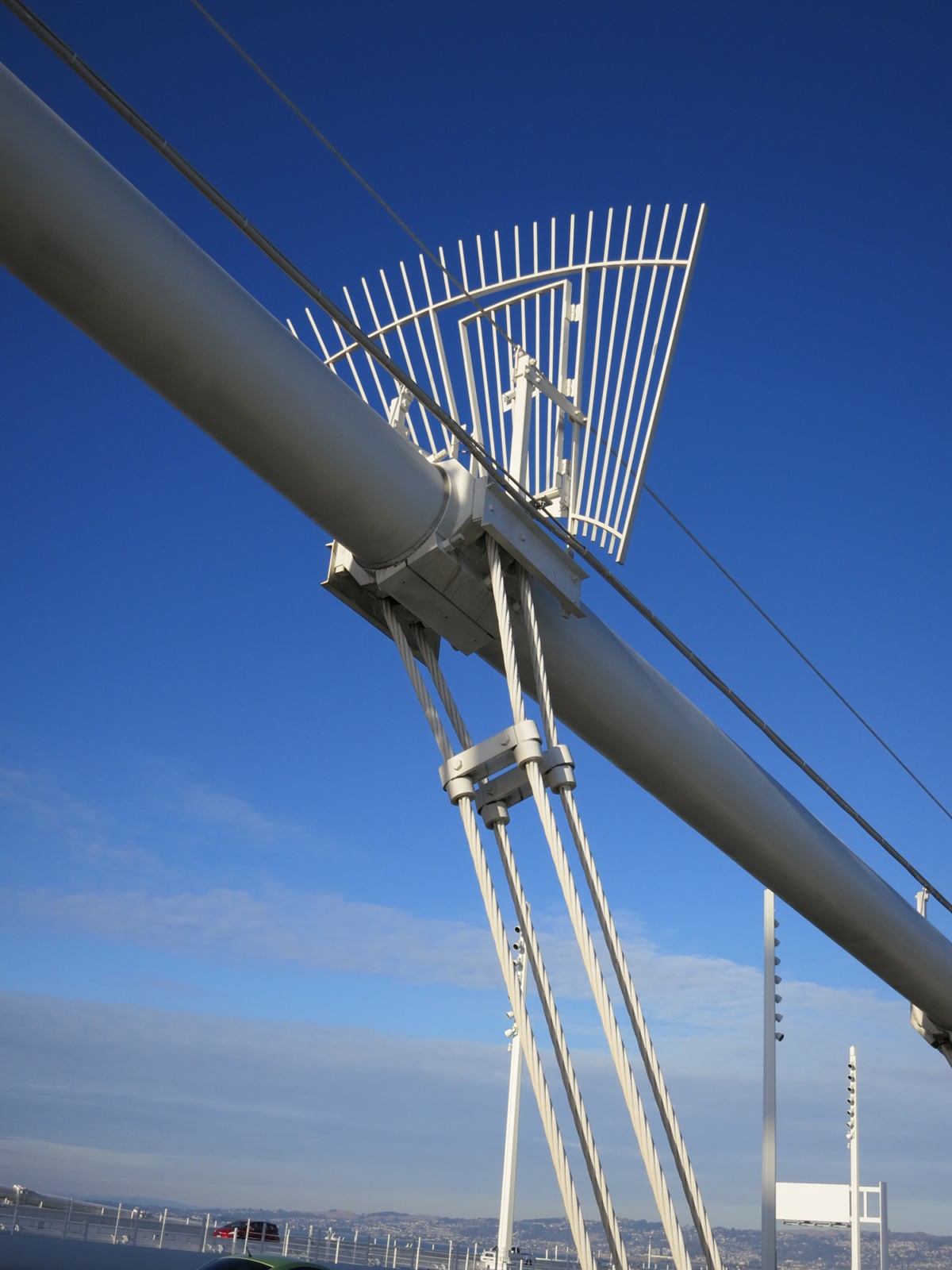 A maintenance access gate guards the main cable of the new Bay Bridge’s eastern span. It’s almost identical to the ones we first saw on the Brooklyn Bridge in 2011, though this one has an asymmetric tilt. 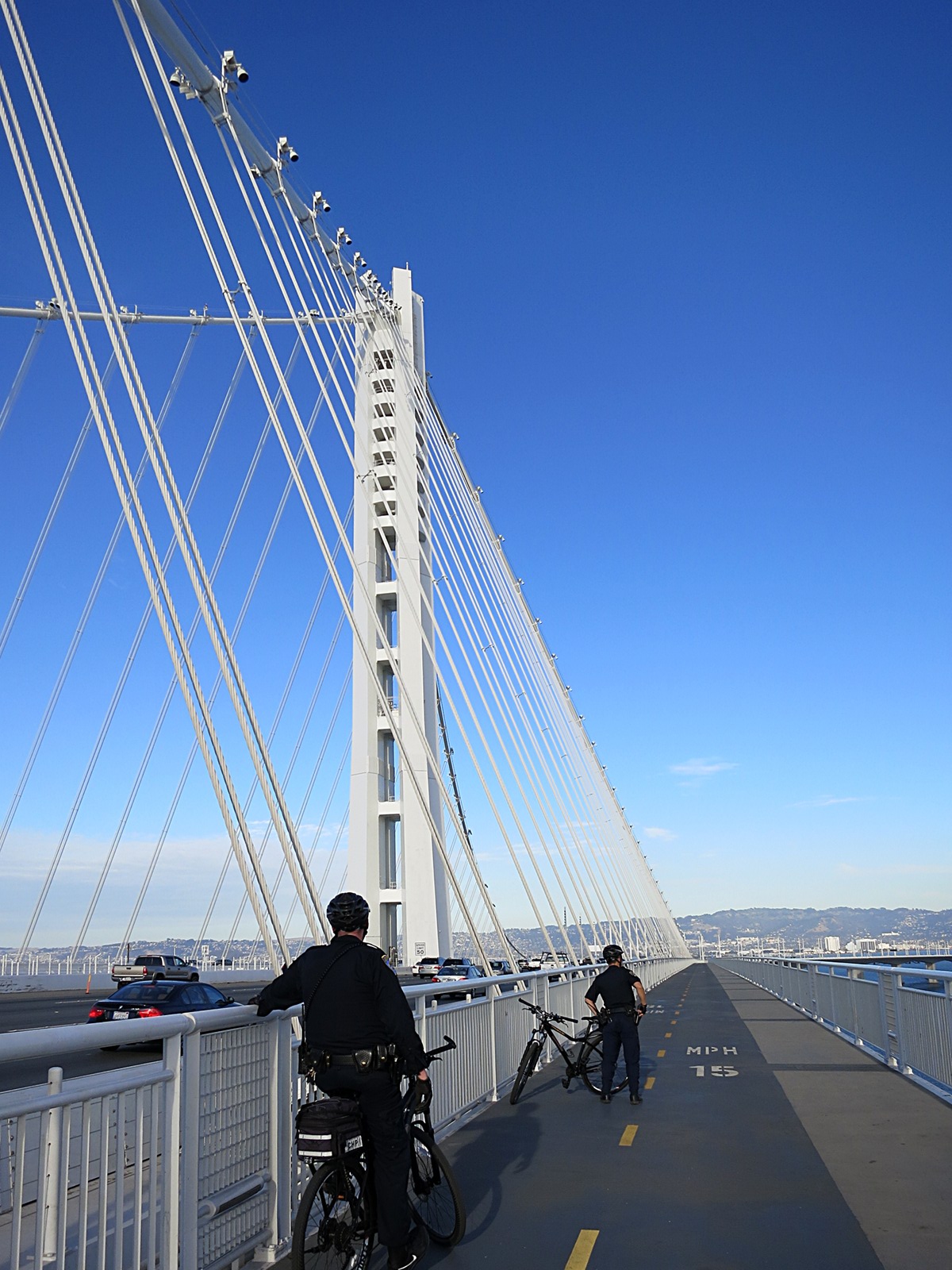 Here a police team patrols the new Bay Bridge pedestrian walkway. As mentioned before, most of the officers we saw were on bikes. They made regular rounds along the path. 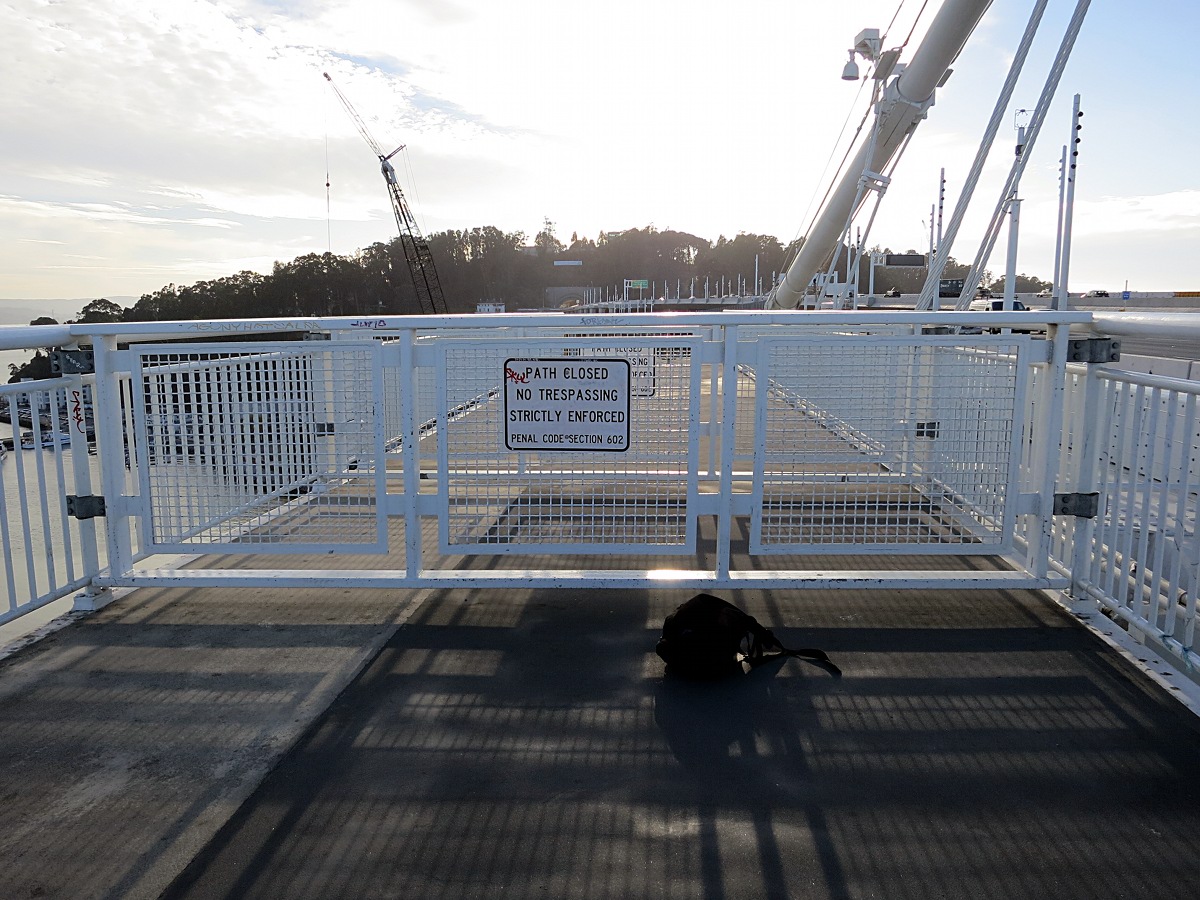 This is as far as you can walk toward Yerba Buena Island. Pedestrian access ends abruptly about a quarter mile before the hill. The concrete ends not much further on. To the right, just at the deck level, there is a marked water pipe—presumably there to feed fire hydrants on the bridge—though it sounded dry.

Here, out at the Yerba Buena Island end, Martin lines up a shot of the new span’s single pylon. Below him, to the left, are the preparations for detonation of an old concrete pier; beyond, the Port of Oakland.

Two years after opening, the span is collecting the inevitable: dirt and debris. This will one day harbor weeds and hide oxidation and deterioration. We’ve seen the results on most of the large structures we’ve surveyed, especially the roadways. They will make this, in its turn, the “old span”. 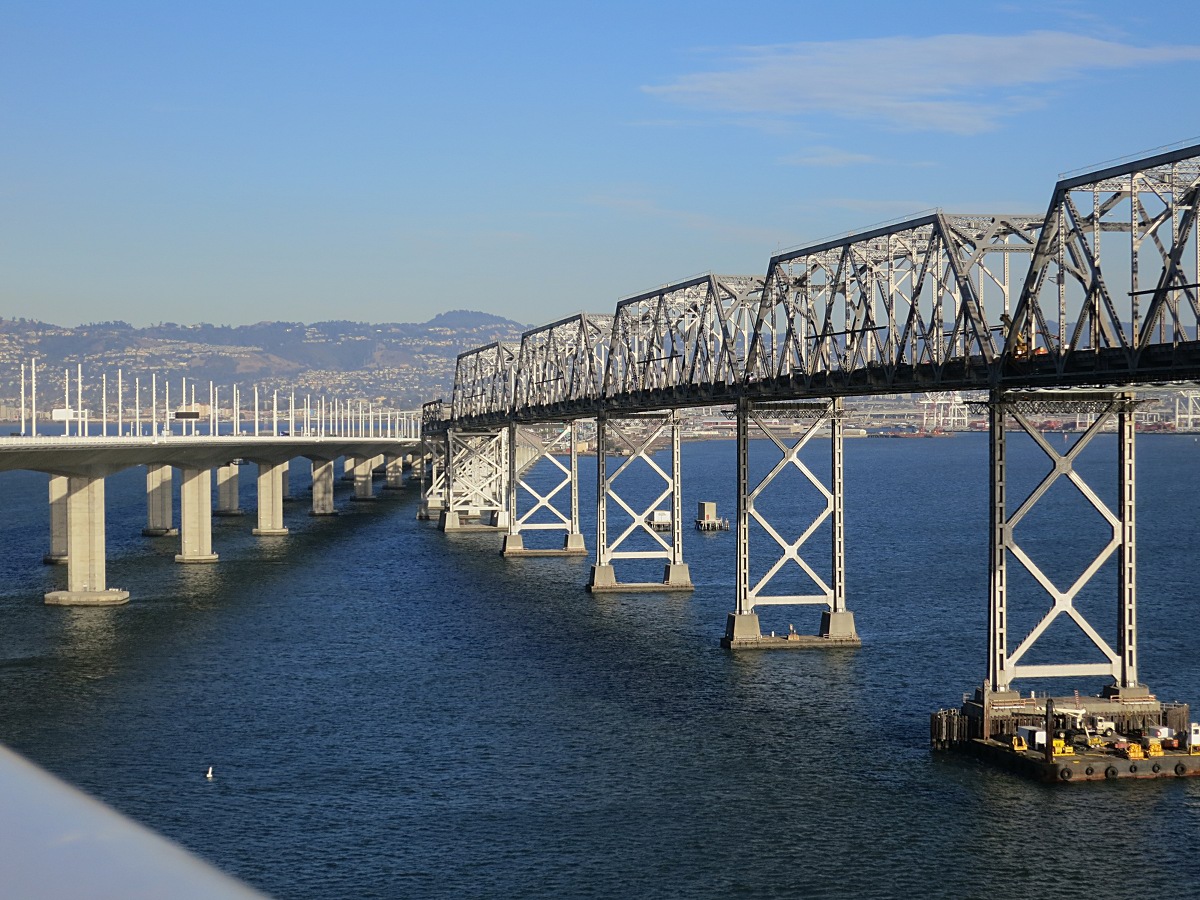 Heading back toward Oakland along the pedestrian walkway in November, 2015, we see the old steel span on the right. Demolition equipment and supplies are stacked on rafts moored to the submerged concrete piers below. The old top deck is already gone, along with the tall truss-work that once towered over the longest sections. 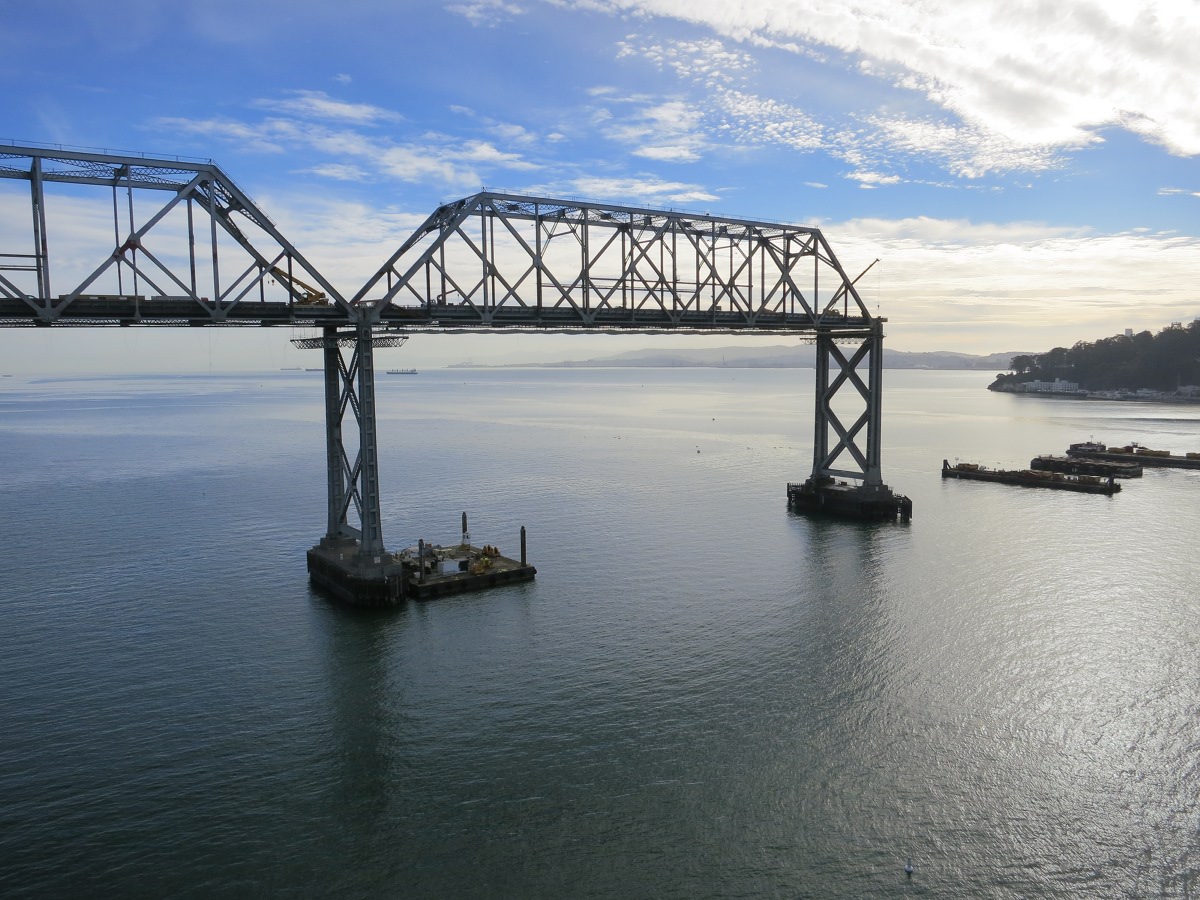 The span is incomplete toward the west and no longer connects to Yerba Buena Island. It’s easier to truck material off toward Oakland in the east than to drive it through San Francisco; that explains the direction of the project, with demolition proceeding from the west. 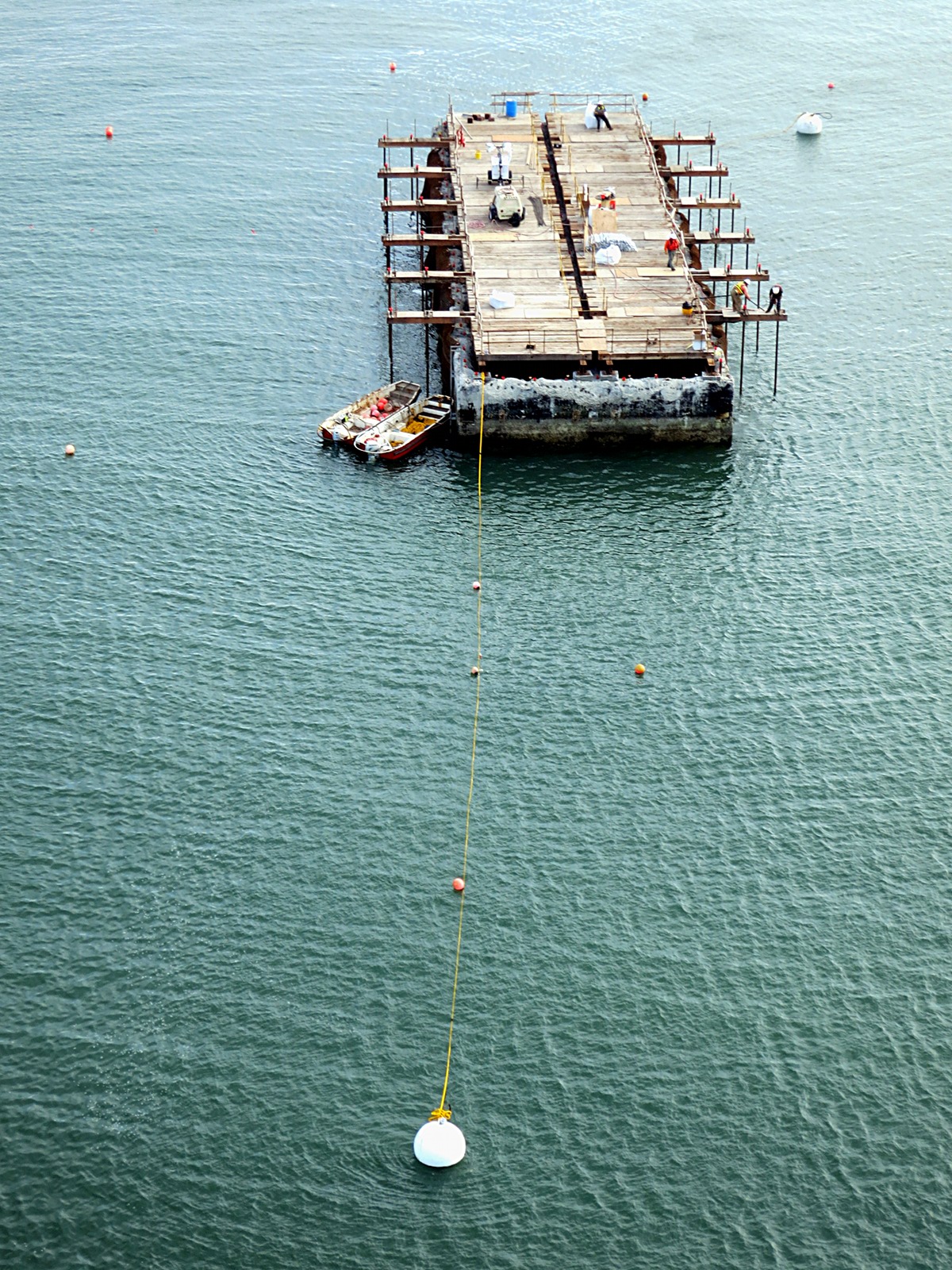 On the day of our walk, preparations were under way to detonate one of the original concrete piers. The steel pylon above it had already been removed. The remaining structure—reportedly five stories high underwater—was to be removed by “implosion,” with baffles anchored a bit away from the long sides to protect marine wildlife.

Explosive demolition suggested another sonic opportunity, but CalTrans had announced the roadway would be closed to prevent rubbernecking accidents. The pedestrian walkway was to be closed as well. We worried this might delay our plans, but the work was going slowly and carefully. The walkway remained open until the following weekend. 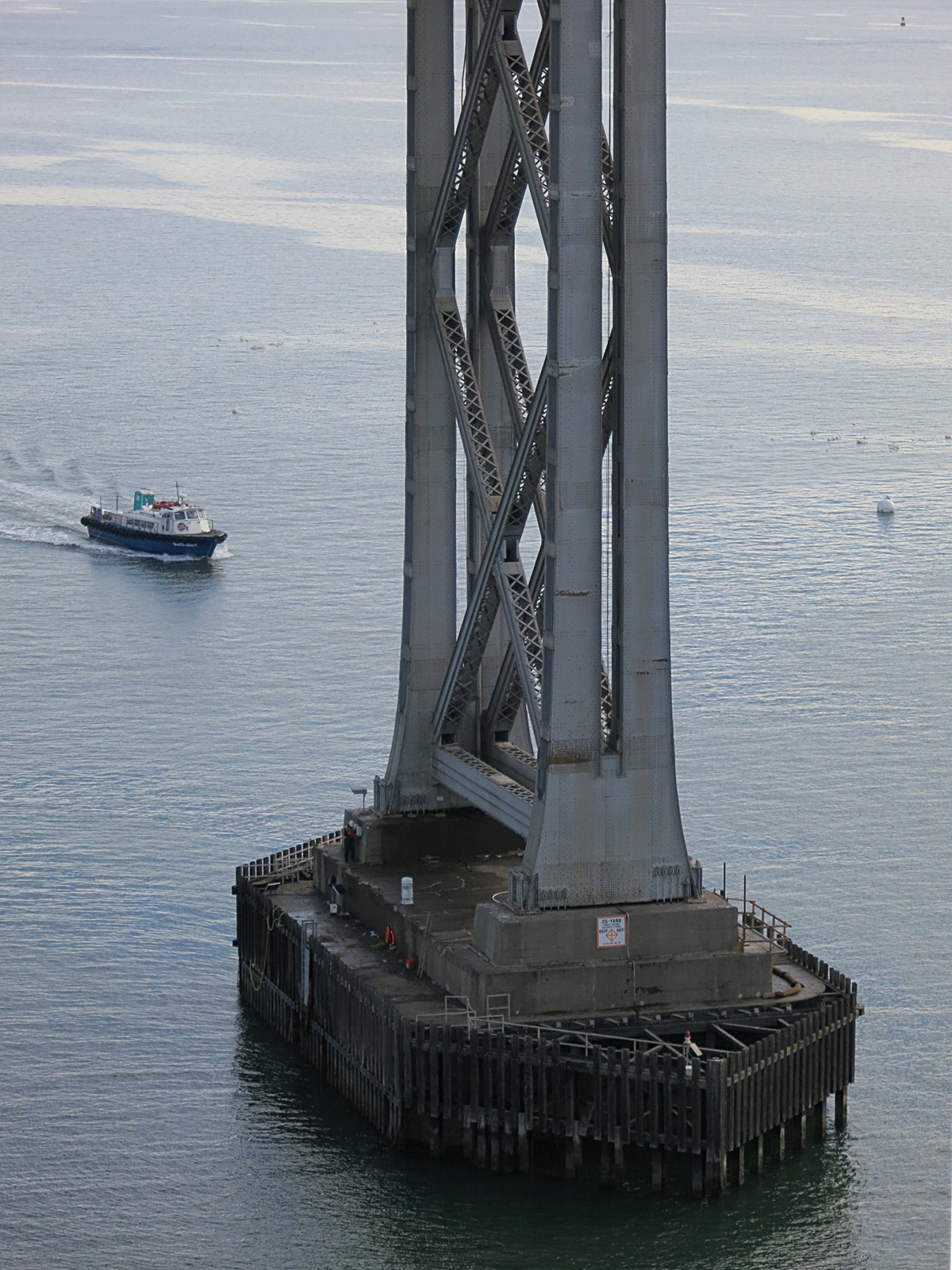 Here’s what the pier probably looked like with its steel pylon on top. The original pylons are massive, complex structures. Many have ladders and hatches built in to permit maintenance access. The remaining pylons will be dismantled one by one, from the top down and from west to east. 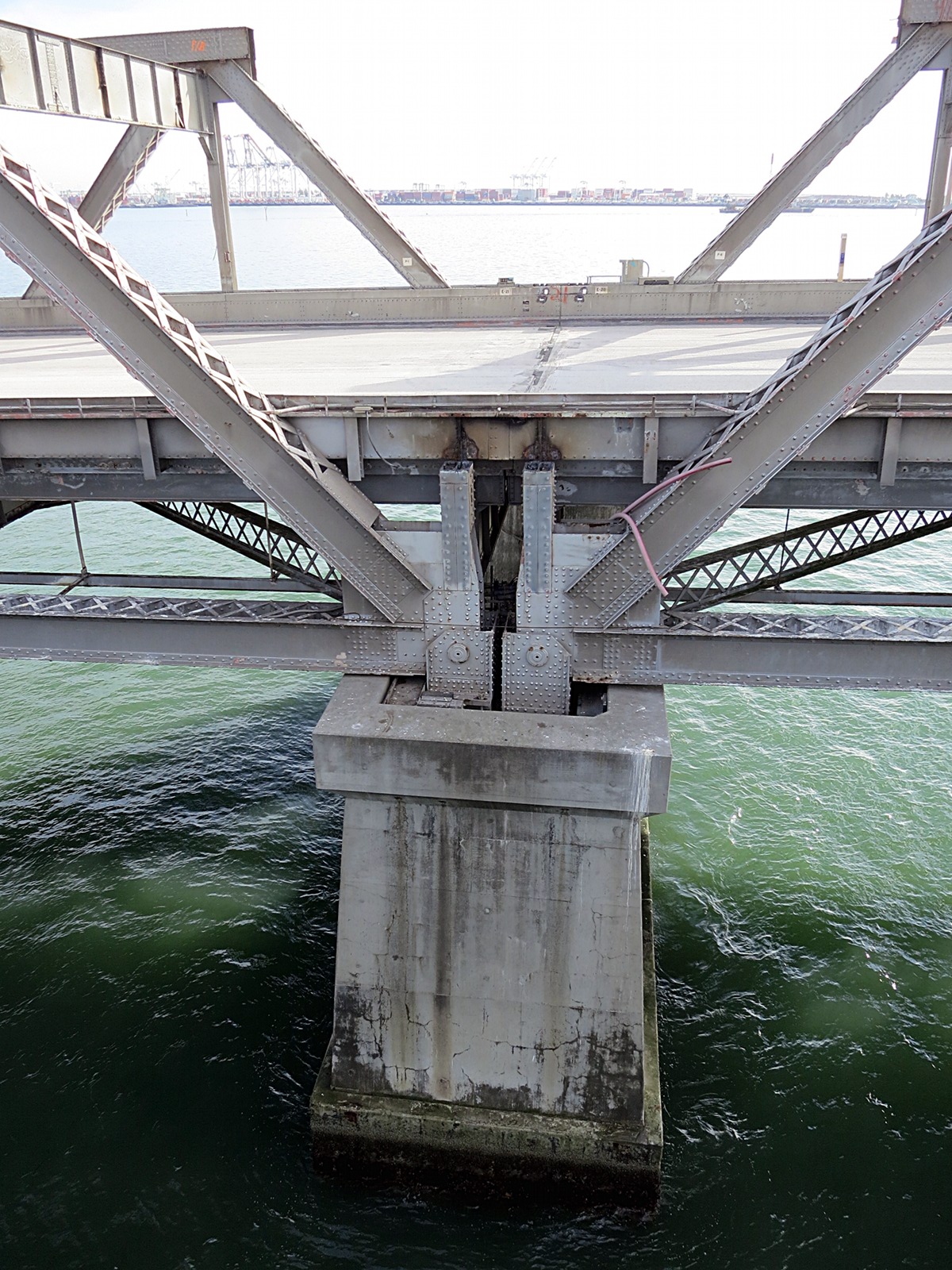 Near the far east end of the old span, 1936 design and construction practice appear in sharp contrast to the new span’s approach. This joint is similar to those of the upper deck that fell so spectacularly in the quake of 1989.

At the eastern end, the old bridge stands right alongside the new span. The straight, white line of the new span’s railing contrasts with the old structure being demolished a few feet away. 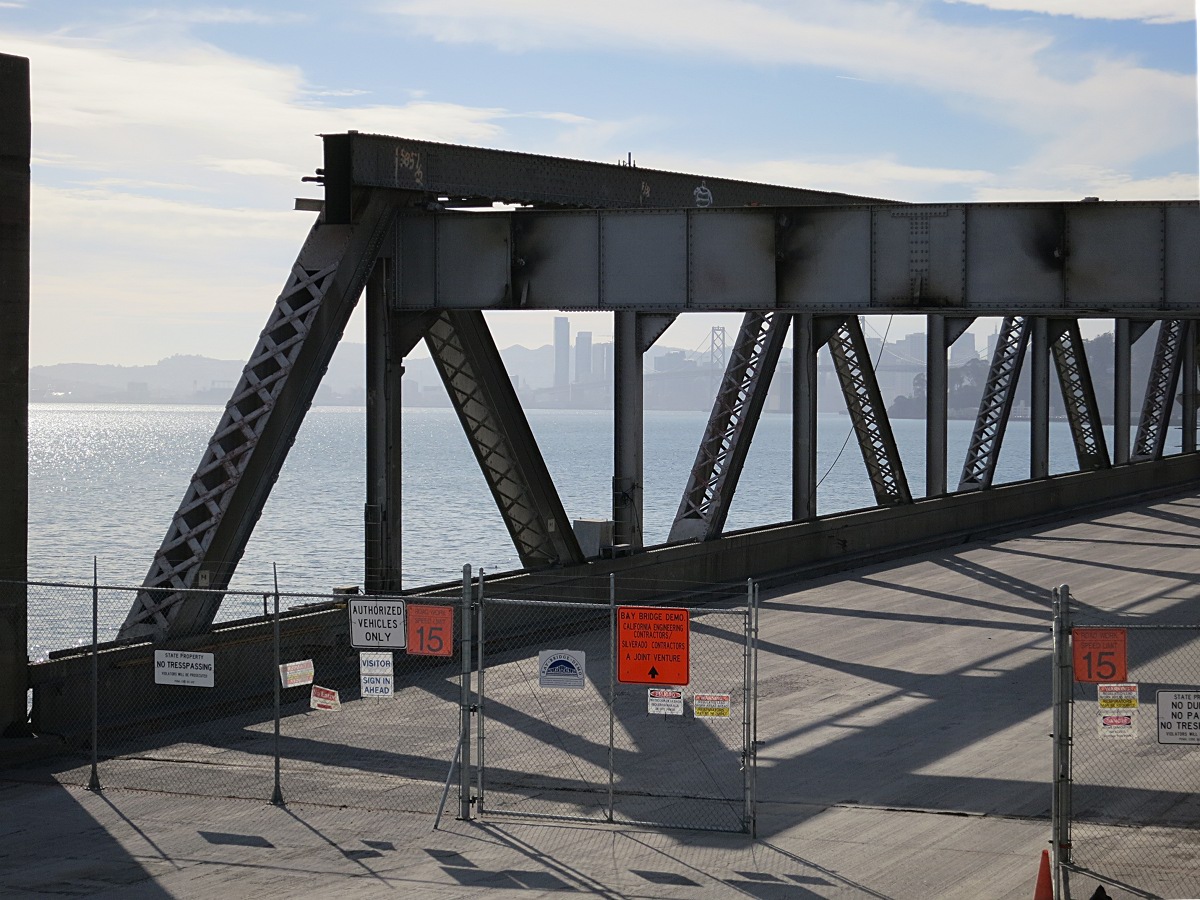 The east end of the original Bay Bridge shows torch marks and missing sections, evidence of the earlier upper deck demolition. The old lower roadbed is still functioning for trucks pulling equipment on and salvage off the bridge as it comes down, and for the salvage crews to get to and from work.

Eighty years and counting down….