← Listening to Jun Kaneko
The Rhetoric of Equestrian Bronzes →

2011-04-11: We finally got to the Brooklyn Bridge with gear and time enough to walk across.

We got a chance to tour the Brooklyn Bridge on April 11, 2011. It was a gray day with low-hanging clouds and intermittent drizzle, though the weather didn’t appear to bother cycling commuters or tourists much. It may have helped cut down the crowd noise a little, but there were still plenty of people on the Promenade at 08:30.

The view from the Brooklyn side includes the unmistakable archways of the first steel-cabled suspension bridge in the US and its pedestrian walkway. The towers of Downtown rose up and disappeared into the mists over the river, putting even the bridge into perspective: the towers stayed well below cloud level. 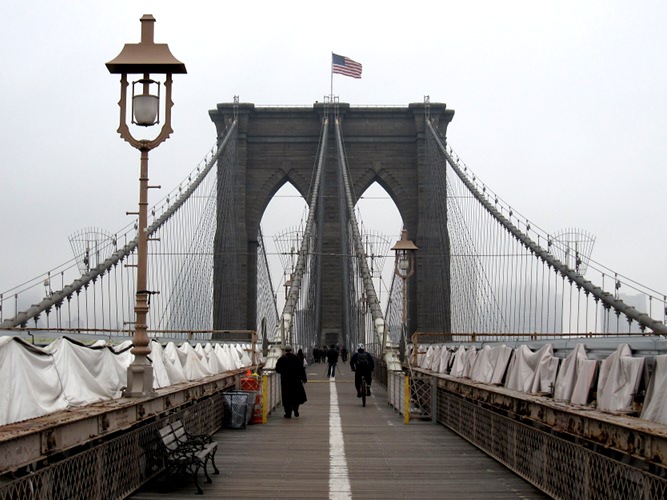 We started on the Brooklyn side after a fortifying breakfast and walked into Manhattan. The approach to the bridge from the Brooklyn side begins at Tillary and Adams streets. The elevated Promenade is divided into pedestrian and bicycle lanes. Phil chose to stand in between. We started recording our walk up the Promenade at its base and kept it up for about fifteen minutes, until reaching the first of the suspenders. 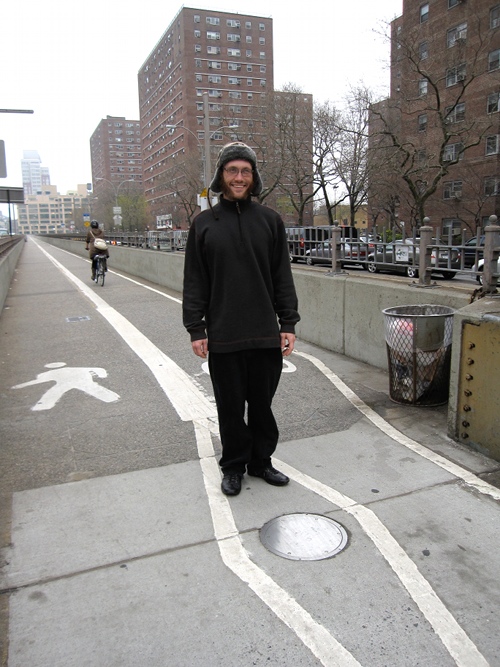 The bridge in April 2011 is in the second year of an extensive “rehabilitation” project (described at the NYC DOT site as of this writing). We found the railings on the Brooklyn side swathed in some sort of heavy industrial drop-cloth, and nearer the southeast tower there were galvanized metal walls bolted in place and covering the suspenders. Things loosened up considerably by mid-span, but we’d missed some of the most sensational views. The work is scheduled to continue through 2014 and—from what salt-air corrosion we could see—is sorely needed. As if we needed one, it’s an easy excuse to return…

Here Dave stands under the southwest inner catenary cable on the Brooklyn side.

Suspenders are not accessible from the walkway at the center of the span. This is a sample taken from the steel superstructure over the roadway.

The Brooklyn Bridge uses a combination of radiating stays and vertical suspenders. The two patterns overlap and form an irregular diamond grid. Where the cables cross, they’re bolted together. Sounds are complex and fairly close to open-air recording except for the rattle of the touching cables. 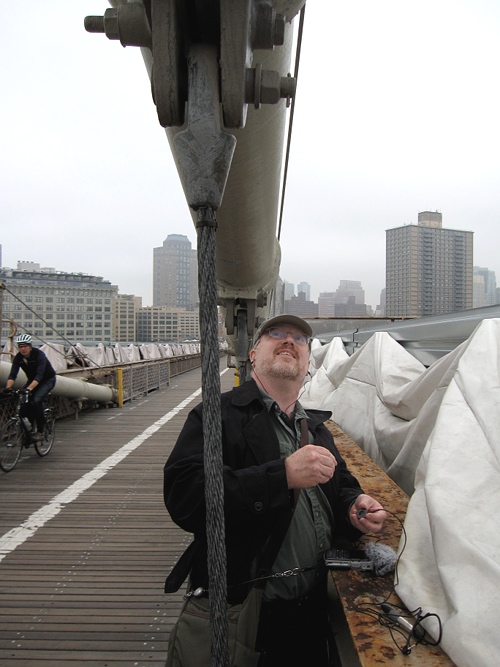 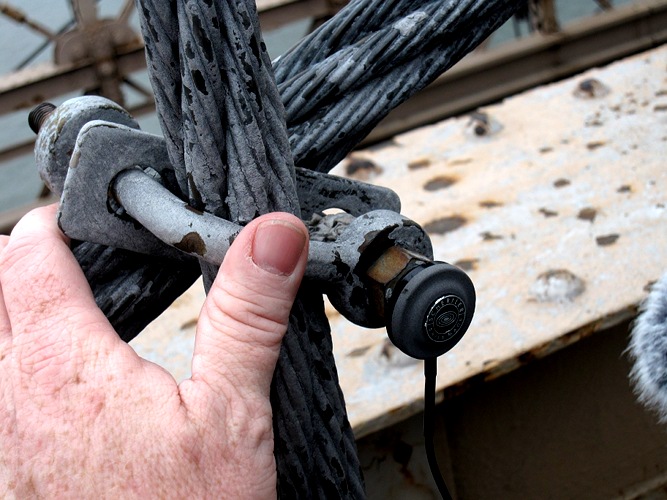 This is the inner safety handrail cable of the Brooklyn side inner southwest catenary.

As we found during our Golden Gate assays, the safety handrails that follow the main cables are sonically fascinating. They tend to have a wide and interesting harmonic range without a lot of automotive “punctuation.” And on this day, we saw them in use. 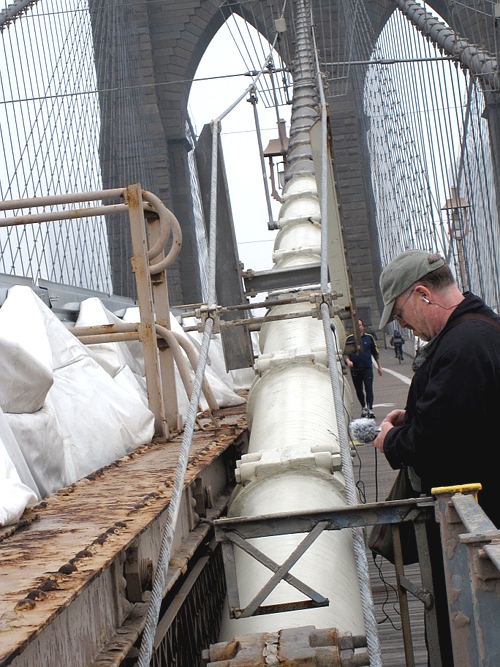 On the Manhattan side we stumbled on a team of New York public safety officers conducting a rescue training exercise. Fifteen people—all men, as far as we could see—threaded their way in between the safety handrails, clipped on carabiners, and began a long ascent. Everyone was aiming for the north tower, which meant walking up the steepening main cable.

The first man to go had clearly done this before, and just walked right on up to establish camp on the tower. Everyone else followed very carefully, especially the guy packing the yellow stretcher/immobilizer on his back, who had to squeeze the thing in between the safety handrails first, and then thread the needle of the gate designed to deter thrill seekers.

This team was quite a conversation piece for people on the walkway, but you could still hear the carabiners being clipped on and off as they went past each stay on the safety cable. 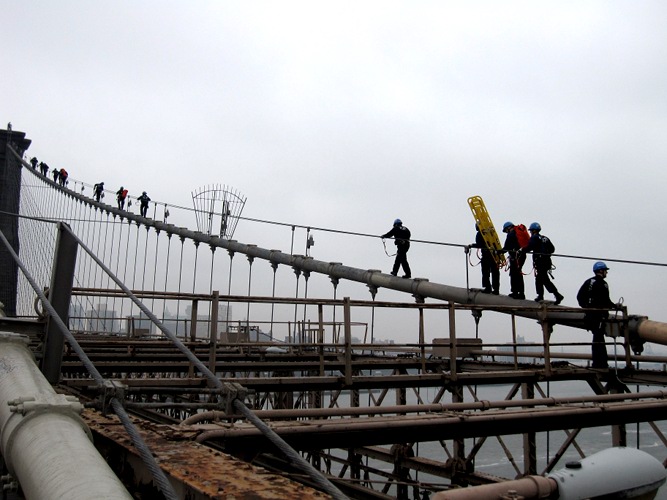