Posted by Mr Yesterday on Jun 20, 2015 in audio, blog, ccMixter, personal | No Comments 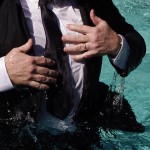 …in which we contemplate the circumstances calling for neckties.

I nearly never sit down to write a poem about “crossing over.” It was more on my mind over a decade ago, when I still smoked, but even then it wasn’t something I felt I needed to express. That’s come and gone over the years—the urge to speak of Death—but it’s not been a prevalent theme. I try to accept that it will come, someday, which in my case means pretty much ignoring it, at least as a focus of meditation.

(A brief aside: that doesn’t mean that intimations of mortality don’t happen that often. They’re actually fairly common, if you’re looking. The photo I’ve titled Webster is one of those emblems: a wad of mint-green gum squashed flat in a parking lot, with little bits of autumn leaves mashed into the mess, looking to me like a Día de los Muertos sugar skull in three-quarter profile. I tend to file these under serendipity and move on…) 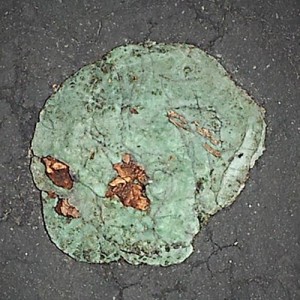 Webster, a bit of serendipity

So, a week ago I posted what ccMixter refers to as an a capella (or “pell”): a vocal performance intended to be reused with someone else’s instrumental or backing tracks. That one had been brewing a while as a melodic line invented during my daily commute to work and polished on and off over the past year or so. Then somehow it reached a stage where lyrics suggested themselves, and the whole thing transformed into something else: Your Day, a reminiscence on lost love while attending a wedding…. It’s garnered several remixes in its first two weeks, and I’m flattered.

But come to think if it, I don’t usually sit down to compose a lament about someone else’s marriage, either. This is apparently where the muse enters: I get into some other character and write a song about him.

Sometimes a work will just “pop out” of a melodic idea; sometimes it evolves over a long time and many editorial revisions; sometimes the tune morphs from folk to blues to something else. I tend to have the tune in mind and craft and edit and polish the lyrics to fit. But it gets very interesting when the sound—just listening to something over and over while snipping it up to splice into a bigger composition—somehow compels the song, and a whole poem pops out instead. That’s what happened when I concocted Blood Moon for Bankers and, more recently, Charon. 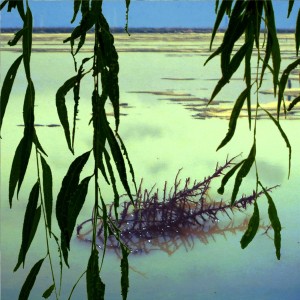 The water is wide

And that brings me back to the neckties. I’ve had a love-hate—well, mostly hate—relationship with the necktie over the years. It turns out the secret to comfort has little to do with the tie and a lot to do with the size of one’s collar, but it took me years to figure that one out. I wear a tie when it’s expected, and pretty much never otherwise. My songs so far this summer seem to be about discomfort in the face of convention: this, for me, is what the necktie represents.

I’m fine with that. It’s honest. I don’t know exactly what I’m doing or why I’m doing it. But it’s OK.