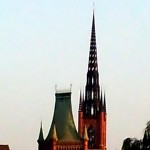 …in which we work on our upcoming roadshow…from the road.

Deadlines come in many forms, but the only ones that absorb my full attention these days seem to be performances. Since these are usually far away from the studio, readiness involves getting the media files done well in advance—or at least a bit ahead of the performance itself. Coincidentally, for the last five years, wikiGong performances in Long Beach, California have dovetailed with business trips to foreign lands. Soundwalk 2010 and 2011 ware both followed immediately by trips to Beijing (In 2011, a grain of sand ingested by my camera while shooting our Long Beach photo sessions for Elegy for Matt Mason a week before reduced me to using a cell phone for photos on that trip). One of our Soundwalk 2012 writeups was posted from Stockholm a week later. This year, the business trip came three weeks before the performance, so what would normally have been a week of rehearsal became instead a week of fevered nighttime pre-production.

Audio editing of Transit continued through the week, thanks to Reaper, a compatible laptop, and the miracle of portable hard disks. (Someday we may shove 10+ gigabytes of AV into the Cloud, but hotel and convention center WiFi systems were teetering under the weight of corporate use all week….) Sound is roughed in and ready for stereo imaging, which I’ll do in the studio Sunday before encoding the video for (hopefully) the last time. That would put video production nearly two full weeks ahead of prior years’ execution…if that were the only video we were using.

Jacob has been practicing his delivery and tweaking the text of Elegy for Major Matt Mason. It will need a whole new soundtrack since Becky won’t be able appear in person September 28. And I am always looking for an excuse to insert yet more of the content we amassed in our 2011 video shoots. So we’ll plan on one more week of filmredigering in the studio—along with as many Skype rehearsals as we can manage—before packing up the carnival and hitting the road again for Long Beach.