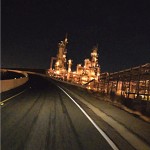 …in which we toil over the inner harbor channel with mouse and camera.

Transit is one act of our A LOT 2014 presentation the Floating Bridge of Dreams. It was initially envisioned as the opening act, and might still turn out to be…assuming we can overcome our fear of daylight. That’s because our 6:30 evening start time September 28 is going to be a wee bit challenging for video projection on rough brick: sunset is not until 6:40. For a preview of conditions and to predict the likelihood of a successful video outcome, Jacob and his lovely assistant canvassed the site over the weekend, suitably attired with foamcore. The verdict: indeterminate. Oh, well….

In the studio, it’s Editsville and no doubt about it. I’m slicing, interleaving, and splicing two seven-minute bridge drive-bys with a 2’30” hand-held shot of a motorcycle cavalcade and vignettes of bridge signposts both real and metaphorical (visual and sonic, too). We tried the first improvisatory audio track layering—right over the top of the fresh, rough-edited video—this weekend, too: very promising, but there’s lots more work to do. As familiar as you get with your footage, in the end it’s always a long, hard slog through the media pile stitching it all together, whether you’re Stanley Kubrick or Ed Wood….

While Jacob attended the Arts Council for Long Beach mandatory meeting to prepare for A LOT 2014, I was slaving away looking for ways to save time and finish editing before the performance. (Back story = there’s this annoying day gig thing and some business travel in between….) And I cannot say enough good things about Reaper right now: I had planned to download an SMTP leader clip (and still may…they’re cool!) when I found I could just slip-edit the whole video clip to align with the multi-track audio we’d done using a second computer (since the main was tied up playing back 1080p-formatted video)! And that means I can just paste in some of the new bridge audio samples and start overdubbing when ready….