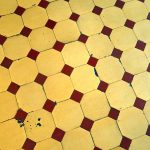 Collected discussion and working notes for Looking Backward, performed as part of our part of our Long Beach SoundWalk 2012 project. 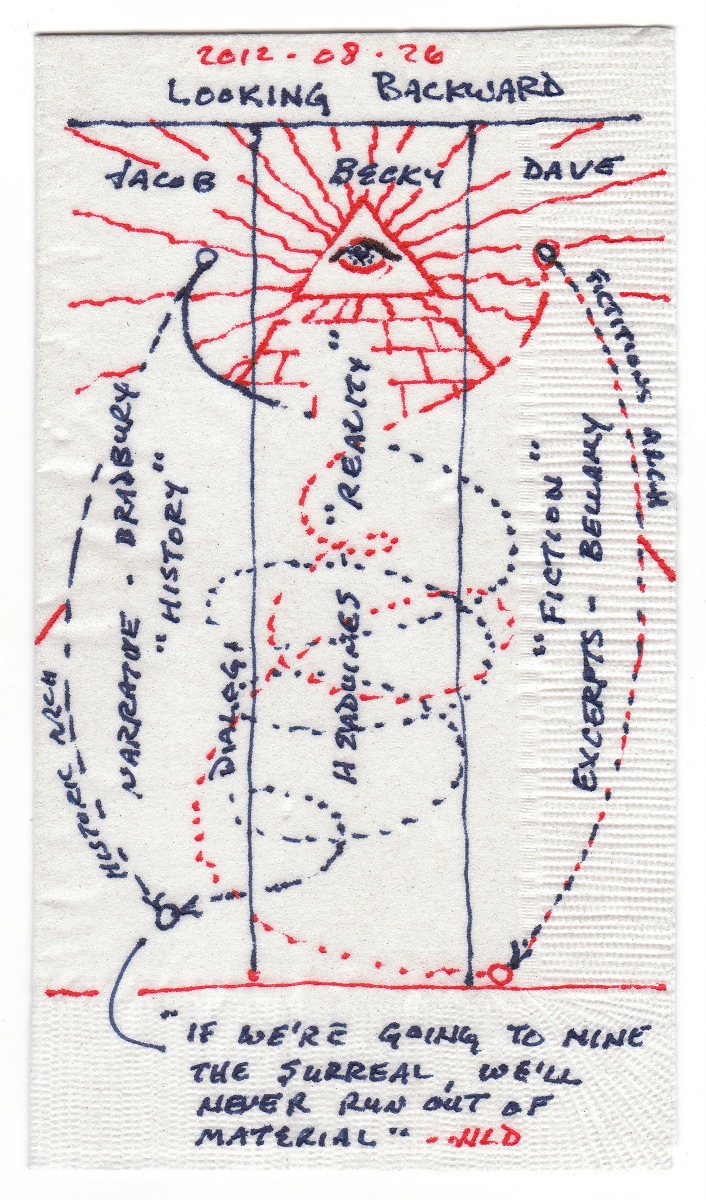 Creative collaboration is a fascinating process, something akin perhaps to brewing beer in Belgium. Spores gather at random in the open air. The brewer’s faith is placed in serendipity, itself leavened with knowledge of past success. The largely unguided and private fermentation processes complete on their own before we circle back to the stated goal of bottling a product. It’s all very abstract. Until it isn’t.

Sometimes it even happens in time for the performance.

So that was this morning’s question: What form should Looking Backward take? Are the three parts sequential, or conceptual? Now that the material is starting to pile up, how to organize it for performance? See below…asked and answered August 08, but apparently not very clearly. As often happens, Jacob and Rebecca took the bull by the horns in conference while Dave took “notes.” 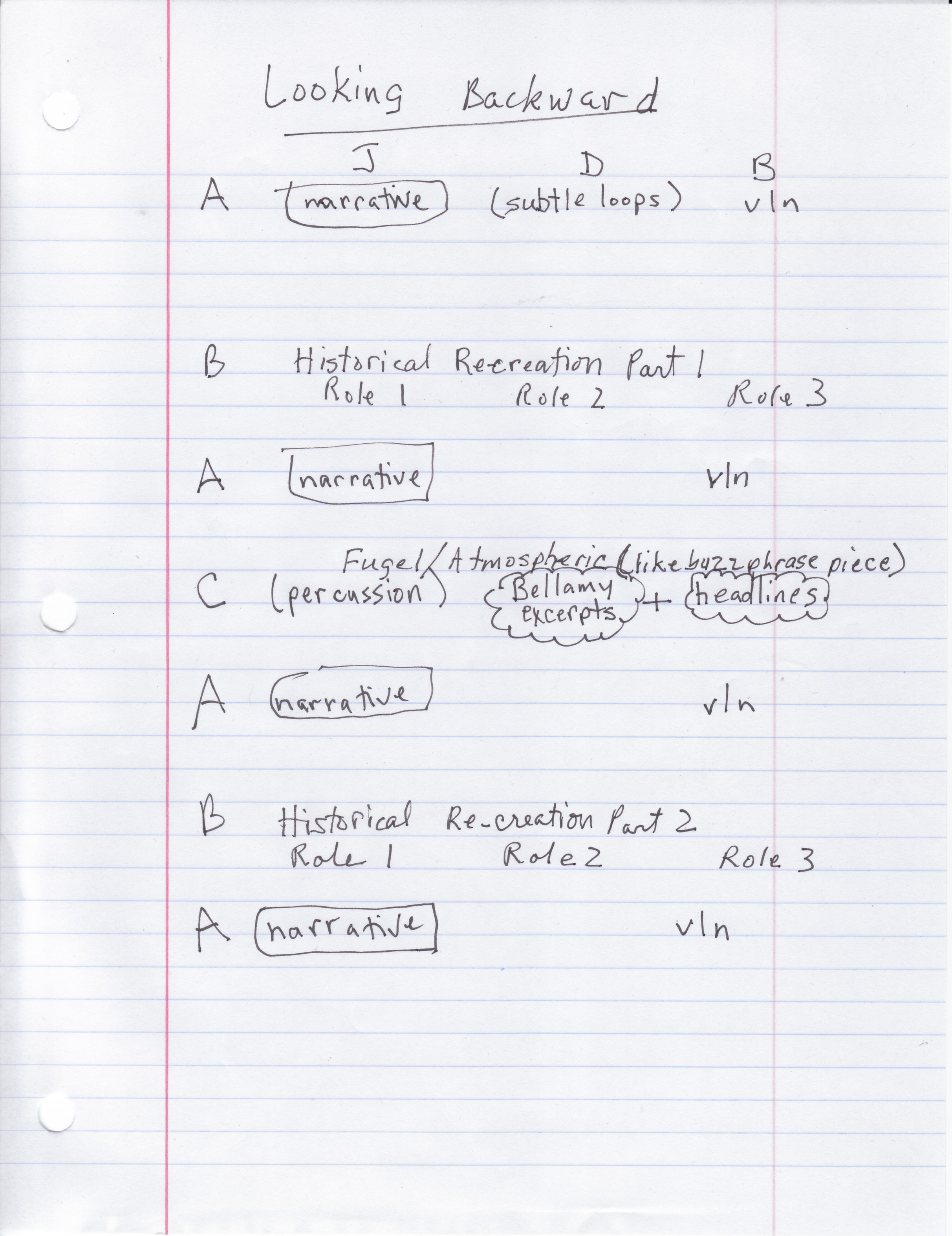 Meanwhile, Rebecca continued the process and devised this impromptu score.

Meta: Migrate Scaffolding to This Page

I’m kinda happy with the prose notes for whatever we eventually speak. Suggest that the prose is scaffolding for emergent “poetry”, and that we preserve some of it by transplanting it to this page.

Hm. To me the scaffolding is very interesting and some suitable for framing, as it were. Both images we had up were part of the project. (“Preserve some of it?” WTF, someday it may be all there’ll be. YouTube won’t stay free forever….) Definitely not “Talk” in the usual wiki usage (more below). I would much prefer a “Scaffolding” or other introductory page to this relegation to obscurity and, ultimately, death by disinterest.

Unless, of course, you believe books for adults are prohibited from having illustrations. Or wished to preserve the sanctity of only the text itself. I wasn’t thinking the finished product would everactually live on the wiki—where it can be edited “mercilessly” by anybody—once the work had been performed; we’ll enshrine it on the blog pages or elsewhere, after agreeing whether it will be ©, (cc)BY-SA, or restricted from commercial use by the legal entities constituting wikiGong.com, cast in bronze, or what have you.

I could see breaking the whole business up into sub-pages—Score, Stage Directions, References, etc.—which could then be included in some humongous super-page by transclusion. Maybe. But that’s a lot of effort for a fleeting work in progress.

In brief: I was more than a little POed to see some of my best work of the day (IMH-effin’ artist’s opinion) vanish, and only mildly mollified to find it had merely been banished unceremoniously and sans discussion to a Talk page. Talk is for discussing that first.
—Mr Yesterday 20:48, 26 August 2012 (MST)

“Talk” on a wiki is about the page (or project) you’re crafting. Generally it’s where we’d discuss things like moving whole mounds of content to the Talk page before actually doing it. Good guidelines here, I thought. Also key element is signing comments so we don’t get lost, which MW helps with by using three (handle only) or four (handle plus timestamp) tildes.
—Mr Yesterday 20:48, 26 August 2012 (MST)

Also, if we go around moving stuff like this—it did, after all, simply disappear to nowhere evident, unless you have established use of Talk pages as part of your editorial M.O.—it might be good to add the appropriate Category links to the Talk pages as well. It can be done at the end of the page (traditional and best practice) but also inserted mid-stream if convenient.
—Mr Yesterday 20:58, 26 August 2012 (MST)

Oh, yeah. Don’t put anything back on my behalf. It’s out of my system now. We still should discuss working assumptions some time to mitigate the risk of future misunderstandings…
—Mr Yesterday 21:04, 26 August 2012 (MST)

The three original aspects of the piece, in my (very) rough notes were:

Because they appeared this way, in a linear outline, this might be construed as the work having three “movements,” like Oracle_du_Jour But in my mind’s eye—and as we’d discussed that evening, if I remember aright—this piece has three confluent streams instead.

Bek captured the whole business in her 3×7 matrix, which also mapped the streams to people. So my loopy lines may be evocative, but her directions are precise.
—Mr Yesterday 21:16, 26 August 2012 (MST)

I will touch more on this when I can spend more time, but what you are getting at is the loss of an entire national moment when there was a hopeful outlook–the trusts were being busted, the Progressives were on a roll, there was a rising tide of social welfare causes, all of the many diverse elements that treated democracy as an active, living spirit manifested in America for the first time in the history of man. There was a genuine faith in both the capacity of the goodness of human beings, coupled with the incredible inventiveness of technology, and these things would coincide together as Utopia for real. It wasn’t just the socialist agenda, it was the broader sweep of American exceptionalism. And all it took was a secret agreement between Old World powers that brought about WWI, and that was the end of that. Wilson was a rube Yankee and never saw it coming.

The identity of the building’s final architect is a subject of debate. Lewis Bradbury, a mining and real estate millionaire, commissioned Sumner Hunt to create a spectacular office building. Hunt turned in completed designs, but was replaced soon after by George H. Wyman, who supervised construction.

According to Wyman’s daughters, he was asked to take over because Bradbury felt that Wyman could understand his own vision for the building better than Hunt, although there is no evidence that Wyman changed the design. Wyman later designed other buildings in the Los Angeles area, but the Bradbury Building (if indeed it was designed by Wyman) was to be his only work of lasting significance, whereas Sumner Hunt went on to design many other notable buildings, including the Southwest Museum.

A writer found work in downtown Los Angeles, a few blocks away from what he knew, where many buildings were a few decades older. He felt the river of time sweep him through the world, and sought to make this time and place his, like others. What was this place? Food. People. Sounds. Buildings.

Waiting for a meeting, 20 floors up, he studied the rough texture of old buildings.

A hypertrophied, glazed canopy almost covered one block of brick and stone. Seemed familiar. Could it be?

Being a variety of excerpts from email, giving some chronology to my personal discovery of the Bradbury Building.

Oh, wait. I get it. So there’s an extra nostalgic, elegiac, emotional quality to my relationship with architecture. [Wouldn’t you know it? This parallels the theme of loss which runs through much of our stuff: that “elegiac” thing. Loss in what sense? Not of anything that physically existed. What we’re talking about is the difference between what is and what people hoped might be: “The future ain’t what it used to be,” as brought to a head in Dave’s “Where’s My Future?” rant at the 2011 Long Beach SoundWalk. If “loss” is the right word, it’s the loss of a hope, a dream, or potential.]

But about that architecture: What is it, really? Not Beaux Arts, really, is it? Maybe it is, in its ornamentation. Not Prairie School. What? Some imitative genre? [Mark Hammons says “Romanesque.” Duh! However, he qualifies this with some more specific considerations.]

What distinguishes the building, of course, is sui generis: the hypertrophied skylight and illuminated atrium. (“Into every atrium some rain must fall,” quipped Bob Kutak. Maybe, but less in LA than in many other places.)

So one cool thing about the atrium is how it prefigures airy, luminous structures much more easily achieved with more modern materials and engineering. [Mark Hammons suggests that at its debut, the Bradbury Building was probably in the vanguard of quick evolution in fireproof construction, compromised to some extent by the amount of oak trim.] And there is something elegiac: the yearning of something barely in reach, but not graspable. The yearning that motivates heroic effort.

Even if one knew nothing about the Bradbury Building’s back story, the relationship of the skylight and pellucid atrium to the massive brick and stone exterior, which appears to support the skylight, suggests this yearning, this struggle, to capture light with hands of clay, to catch butterflies with feet of clay. Golem running through the meadow. Little red ochre boy with Olmec head running through flowers [and that’s where something cut me off].

One thing that comes to mind: The lobby usually reeks of Subway sandwiches. Sigh….

But wait! There’s the whole noisy bustle of discount shopping (mostly conducted in Spanish) as one approaches from the south. Many of my photos were deliberately intended to document this transit.