something to this blue light business? 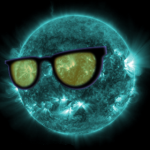 …in which we find the wee hours passing faster.

I frequently find myself lying awake at night. There are probably many reasons for this, but activities undertaken before bedtime have been getting a lot of negative press recently. So now, along with the usual worries, vague premonitions, and insoluble puzzles that interfere with my sleep lately—subterranean termites, California water management policies, rising energy bills, anyone?—I have this horrifying new thought to wrestle with: is my insomnia mostly my own fault?

The inescapable nature of my own insomnia really came into focus once I finally quit smoking eleven years ago. Once, I had chosen to stay up: I was an up-all-night/sleep-’til-noon binger. Nicotine worked well in that equation: no problem when I wanted to stay up; a nice way to unwind when I needed to come down. But recently my own sleeplessness had gone from a lifestyle choice—getting by on four-to-six hours nightly under “startup” conditions—to a nightmare.

I couldn’t seem to sleep through a single night. I didn’t have the nicotine devil prodding me to get up at two AM any more, but I was still lying awake not going to sleep or waking up suddenly in the middle of the night, because I was…uncomfortable? I looked back and saw two patterns: gut-related and neck-and-back-pain related discomfort had grown to be constant companions during my smoker days. What got me out of bed half the nights in the week was heartburn: acid reflux, gas, some kind of alimentary issue. The rest of the time, it was back or foot pain. Nothing was working from a rest and relaxation perspective…because I didn’t feel good.

Long story short: after giving the AMA approach about eight years to make me a new man—addressing plantar fasciitis with orthopedic insoles and the alimentary issues with any number of approaches, including drugs and surgery—I spent eight months in chiropractic treatment that did. I’ve reduced drugs to zero, stomach problems to minimal, and skeleto-muscular aches and pains to levels I remember from my thirties. After feeling like I’d aged twenty years in the last ten, I felt my chiropractic treatment shave off a dozen or more and put me back on track.

Even so, I was sleeping “through” only one or two out of every three nights. And that was only an approximate average, still not what I’d hoped. I felt better when I was awake, and I wasn’t waking up in discomfort or pain. But I wasn’t falling asleep, either. Nights awake—followed by days dozing off whenever boredom struck at work—remained all too common.

There’s been a resurgence of articles on the web this year discussing a topic that was very popular in 2012: computer screens as a source of blue light, which reportedly suppresses melatonin production. Maybe it’s just summertime again, and the folks who sell amber-tinted sunglasses are stoking the marketing fires; maybe it’s just the period for health topics on the world-wide merry-go-round; who knows? Eventually, if the pounding on your door just won’t stop, you get out of bed—who can sleep, anyway?—and go see what’s making all the racket.

I’m two weeks into this experiment:

When this is all over, I will no doubt look like an utter dork, at least when I’m at home after sundown. But I won’t care, because—if these all work—I’ll be smoke free, drug free, nearly pain free, and…sleeping.