one studio, shaken, not stirred 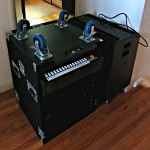 …in which we up our roots.

Summer 2014 is coming and, with it, the threat of fall—and another Long Beach performance opportunity. This year, it won’t be SoundWalk. FLOOD is taking a year off to contemplate a more grandiose reincarnation in 2015.

But autumn beckons, even in late springtime. “The party season,” as some would have it, is not far off. Here at ENKaudio, work continues on the Requiem project to commemorate and preserve the sounds of the Long Beach Gerald Desmond Bridge.

These monumental ideas have a way of expanding to fill all available headroom. The matériaux béton is accumulating nicely—if somewhat serendipitously—and avalanches onto ccMIxter, SoundCloud, and Flickr every so often as the pile exceeds its angle of repose. But the magnum opus itself is still hidden off beyond some distant temporal horizon; our imagined ascent remains daunting, an exploit demanding not merely practice and patience, but extra gear and supplements like oxygen. In short, there will be parts of Requiem finished this summer….

So, along the way, I’m exploring, testing, setting aside, and revisiting our tools: Ableton Live 9, Reaper, and the Korg Radias—having relinquished at last the secrets of its sequencer’s MIDI output!—are vying for pack space with the Roland V-Synth and a convenient (if over-extended) ultra-portable controller. Since improvisation depends to some degree on familiarity and experience—I’ve been putting in my 10,000 hours on the installment plan in so many fields over so many years I’m starting to feel good about faking it, despite learning hard lessons every time I put my personal agility to the test—learning just a little about many techniques, followed by a lot about just a few, is one of those things that…must…happen. I’m in a hurry to arrive at an adequate set-up, and then get practicing. I’ve already learned a lot….

Meanwhile, the Arts Council for Long Beach is forging boldly ahead with its contribution to that quixotic, NEA-sponsored, ex-urban revival project known as “ALot”, which this year will include—thanks to popular opinion polls—free food and more porta-potties. wikiGong contributes no more than other citizens in the gustatory-alimentary dimension but has been invited to perform at Long Beach ALot 2014 nonetheless.

…and that brings us to this year’s Memorial Day weekend event: tearing the ENKaudio studio apart—down to the flight cases and power strips—so we can investigate, prepare, and record in one space and perform, practice, and (maybe) record in another. And by “space,” I mean “room in my house.” And by “perform”, “set up in less than two hours.”

Step One was dismemberment of the primary sound racks to break up duplicate (expansion) units into two similar stacks of capability. It’s always easier to tear down than set up, so in less than a morning I had one fully dismantled studio with several (quite heavy) pieces staged for a move downstairs plus a whole litter of loose parts. Here I paused for breath and waited for help walking anything over fifty pounds downstairs, which also provided time to think about what had just happened: I’d disabled the entire enterprise inside of two hours. I now had nothing to practice or improvise on! Step Two was reassembling half the parts into a working portable setup. By evening everything was downstairs and ready to be racked up. A lot of trade-offs had to be weighed and decisions made, which I opted to do on the fly and without my usual schematic drawings in order to have more fun and maybe save a little time (so now there’s some labeling and a drawing or two that may or may not actually get done at all, though they should be because that’s what saves you when things go sideways on location). Two days later, I ran a sound check on the traveling rig and started chasing hum, hiss, and misrouted channels. It’s not as quiet as the Allen and Heath, and has half the aux channels, but the Soundcraft does a good job as long as the signals are hot. And though I should probably do a shakedown cruise sometime over the summer to prove it, I’m feeling good about setting it all up in under an hour. Step Three will be reassembly of the somewhat diminished ENKaudio reference studio (aka “spare bedroom with my laptop and most of the synths in it”). That’s more of a chore, and less urgent, especially now that I can be spending time really learning the new traveling rig inside and out. Though not just any time, mind you: it’s set up in the living room so there are joint occupancy considerations to consider; the portable subwoofer sounds awesome but seems to freak Becky out whenever it kicks in; and, so far, the whole business seems to be interfering with bedtime in general.

So, a week after starting my Two Studios project, I have one. And counting….