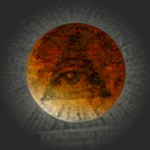 …in which a lunatic project comes to fruition.

My current working method does not lend itself to any industrial definition of “quality”: I don’t seem to be able to do anything twice. But I do sometimes manage to compose a durable artifact from otherwise ephemeral sources.

Blood Moon for Bankers is one of those pieces that seemed to spring full-formed from my head, but then took almost two weeks to actually realize. Its genesis was a brief text conversation on the night of the last lunar eclipse with M Dvorkin of pets on near earth orbit on SoundCloud and other ambient escapades. I had posted something about the upcoming eclipse on Facebook October 7 and the phrases “Why do you think stock market’s going crazy?” and “The moon is too big to fall” came up.

The resulting short circuit in my brain spat out the title like a puff of ozone.

That same evening, with the blood moon still pending, my subconscious stole away with the ad hoc sequencer project I’d been brewing for a couple of days in the studio. Soon the first tracks were in place. The eclipse came and went. I got outside around three AM and got a good look, though no photos. The lyrics would take another week to sort out, the vocals five takes over three days.

The full mix is posted over on SoundCloud @ https://soundcloud.com/gongmaster/blood-moon-for-bankers. STEMs are available in FLAC format on ccMixter @ http://ccmixter.org/files/Mr_Yesterday/47856. Lyrics are below, and feel free to reuse them under (cc) terms.

We’re talking it, taking it,
faking, shaking it, making it up!

There’s gonna be a big moon, a full moon,
a blood moon at midnight tonight.

It’s gonna rise up, up in the east.
It’s gonna blind you with its cold, clear light!

Hey there, preacher! Are your pews packed tight?
Is the congregation shakin’? Are they seein’ the light?

There’s gonna be a big moon, a full moon,
a blood moon tonight!