back in the saddle 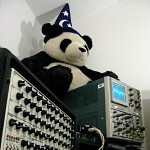 …and riding through the ruins…

The good news is that Studio One has risen again, fully functional, minus the expansion channels sacrificed to Wanderlust. Shakedown testing presented an opportunity to record a couple of “etudes”: nothing ambitious, just a bit of fun to post. The bad news? Cameras are dropping like flies!

Etude #1: Back in the Saddle

This is just my full MIDI and analog sequencer test, with the single TC Electronic D-Two delay loop built up live. There are no loop pedals in this one, and no live mics.

I risked adding 10-foot unbalanced insert cables to the (analog) mixer groups, so far without any noise issues to speak of. So now we have six aux sends plus four groups to choose from for routing out to synths and other processors. The delay loop channels fold back to line inputs, trading safety for channel steering capability. Since the D-Two and DBX EQ chain have ducking circuits, I can port this change to the portable setup with the matching units. (My loop pedals cannot be treated this way because they have “true bypass” switches and could easily blow out a channel.)

Recording capacity is now 10 audio and 3 MIDI channels, at least when using Reaper. That’s more than I usually need for composing and recording. It’s good to be back.

Etude #2: Among the Ruins

No Flash: Take 6: Driving with the radio on, a midsummer sun rising through the dust*

No Flash: Take 7: Waking homeless to a concrete rain*

Jacob got up at the crack of dawn on the June Solstice (officially, a bit before dawn here in California!) to attend the scheduled removal one of the Gerald Desmond Bridge I-710 connector ramps. This involved borrowing (and wearing) hard-hat, goggles, a safety vest, and—ironically, given one of the objectives was audio capture—earplugs, but that sacrifice allowed close observation of demolition engineers in their native habitat. Photos of the exploit are on Flickr.

The sound of the jackhammers chewing up concrete is interesting, in part because it is an induced rhythmic noise—not the more resonant rhythms we collected from the roadway and bridge above—but also in that it occurs very sporadically, in bursts. The tool heads need to be moved into new positions once they punch through a slab, which takes fewer strokes with these big machines than one might guess.

Anyway, since the studio test setup was still in place Sunday, I just routed Jacob’s two-channel recording into the mix and recorded the improvisation.

Meanwhile, no victory, it seems, can be achieved without cost, and this was no exception. Two days after taking a few documentary photos of Studio One’s resurrection, my little digital Canon S100 coughed up a lens error. I’m waiting for the RMA paperwork to return it for troubleshooting and (hopefully free) repair. So, my prime point-and-shoot platform just collapsed. And the photos from Friday night were not up to par, and I wanted those for this blog post….

But wait! I’ve got an old, faithful, 12-year old S330 for emergency use…right? Although there is no software installed anywhere anymore that’s old enough to talk to it! The memory in those days was Compact Flash. After a few fruitless hours spent trying to downgrade the Mac into digital prehistory and mount the camera, I was able to stimulate the S330 lens to open and close incessantly while a “No camera was found” error was displayed on screen. So, it’s off to Fry’s to find a USB CF card reader.

If that doesn’t work, the only reader I have that might is the PC-card adapter in the Roland V-Synth. Well, at least it’s not an Amiga….