Posted by songmaster on Jul 1, 2013 in blog, performance, photography, SoundWalk | No Comments 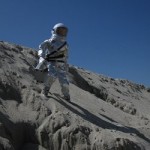 “Elegy for Matt Mason” was one of four pieces we prepared for the 2011 Long Beach SoundWalk, and the one in which I was most deeply involved. That is, it was a wordy piece, and the words were mine. (The lyrics? The libretto? “Script” will do.)

As Dave and I anticipated a wikiGong presence at the 2011 Long Beach SoundWalk, a theme began to echo back and forth between me and Dave: disappointment in the future we found ourselves living in, relative to the one we anticipated in our post-Sputnik youth.

Much of my life was arguably shaped by the idea that without new options, humanity faced something between implosion and steady, inevitable decline; but that there could be ways out. Particularly after the 1973 oil crisis, optimism about the future required either blinders, or an effort of faith, like cupping a match in one’s hands on a windy day. 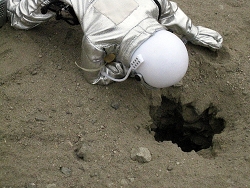 After other kids explained satellites to me in kindergarten, after marveling at lunchboxes silkscreened with rockets, donut-shaped space stations, and moon explorers wearing fish bowls over their heads, this was a rude interruption.

My neighbor Greg is called to dinner early. He leaves Major Matt Mason with me, in the big sand pile behind the garage.

Night is closing in, like the Martian winter: colder and more fatal than any Kansas night. But count on Major Matt Mason to know the risks. Count on his equipment and training to carry him through.

The distant sun throws Matt’s shadow far across the gentle ripples of sere terrain behind him. Matt’s base sparkles in dying rays, a cut diamond dropped in powdered rust.

It’s bone-dry, with no bones. Mars is like a cactus spine sticking straight up from the most barren spot in Antarctica: cold enough to make the bleak surface seem a tropical paradise, and with only the memory of air.

Rupture Matt’s suit, and he’ll freeze-dry like his coffee. But it’s a good suit, and Matt takes nothing for granted. He performs on schedule, executes according to plan, takes no unnecessary risks.

Matt Mason doesn’t fear the danger. He respects it. He learned this from his father, hunting.

The sun is a white point. Enough to make the difference between a Martian summer and a Martian winter. It’s more than a memory, but less than warmth. A nuclear battery burns in Matt Mason’s base.

Matt thinks of swimming. He remembers a lover.

Soon the supersonic winds will scour the planet with fine grit, sweeping the cinder cone of the largest volcano in the solar system, trailing in writhing rooster tails from the rim of a continent-sized canyon. Matt has a few more preparations to undertake before retreating to his base to wait out the storms.

Now Stewart publishes the “Whole Earth Catalog.” He explains: “We are as gods,” he says, “and might as well get good at it.”

The projector throws a forty-foot high live video image of Dr. Douglas C. Engelbart on a screen. It’s the first public demonstration of some of Doug’s ideas. He calls a couple of these ideas the “mouse” and “hypertext.” Doug started thinking about these more than 20 years ago, when he was a radio technician on a Pacific island.

Doug was somewhere on a conveyor belt full of men, machines, and high explosives, aimed at Japan. Conveyor belts converged from all over the United States and unrolled across the Pacific. They carried men, penicillin, cigarettes, aircraft parts, gasoline…. Doug thought it was the largest and most complex feat of logistics governments and corporations had ever accomplished.

Another conveyor belt got there first, carrying a few pounds of toxic, radioactive metals most people never heard of.

Men put some on top of a tower and blew it up. It turned sand into glass.

They put more in a bomb. They sent the bomb across the ocean and dropped it over a city. The bomb turned people into shadows.

Then they did it again. After that, they didn’t have to do it any more.

That’s why Doug Engelbart believed that more people would have to manipulate more information than ever before, to navigate the future. Doug watched vacuum tubes glow as they transmitted information, ideas, with consequences. A ton of powdered milk, delivered to an island. A bomb, delivered to a city. Radios were tools. Tools helped manipulate information, the way they helped mine coal. Doug knew which way the wind blew.

Doug Engelbart explains some of his tools. Doug’s tools are for knowledge workers at governments and corporations, swarming the planet’s biggest problems. Doug’s tools are for collaborators, not dictators. That’s why Doug’s forty-foot image is relaxed and benign. Doug is not the Great and Powerful Oz. Doug is not Big Brother. Doug is an engineer. He’s built a longer lever. He’s showing it to other people, who will understand. They will use it to move the Earth.

It took a lot of tools to put Major Matt Mason on Mars, and the longest conveyor belt ever.

As Matt works, he thinks of Earth. He remembers his parents. His dog. No man has ever been so far from other men, for so long. He is the loneliest man ever born.

Instructions and reminders crackle in Matt’s ears. Mission Control ticks off a list of tasks. Matt acknowledges, but doesn’t say much. He’ll be done before his words reach Earth.

One cold night, Matt’s father taught him to build a campfire. That fire was hotter than this sun. Matt feels a chill through his suit. Maybe it’s his imagination.

When the spring comes–when the dry ice frost sublimates into the wispy atmosphere–the relief ship will come and Matt will begin his long trip home. Until then, he’ll write reports, do lab work. Play Scrabble with the computer. Watch birthday greetings from his parents. Write more reports. Drink a lot of Tang.

It’s colder and darker than ever, and time for Matt to go inside the airlock. He takes one last look across the darkling plain. Melancholy suffuses every triumph. Every triumph is divisible into tedium. Major Matt Mason is the man picked above all others for this task. He is the infinitesmal point, the atom, at the tip of the spear. But because he is a man, he feels all of this. He wants to cry out, but no one will hear. His body, usually so light in the Martian gravity, weighs heavily.

NASA gave us pictures of the whole Earth.

Pretty soon this would get boring. Mattel knew which way the wind blew, and quit selling Matt Mason. Greg lost his. I never got one.

Men made footprints on the moon. Then they did it again, and again. After that, they didn’t have to do it any more.

Gerard O’Neill said that if we could get enough sunlight in space, we could do without gasoline. But it would be a big project, for governments and corporations.

I met Stewart Brand. I learned about engineering. Some people said that maybe burning gasoline would melt ice caps and flood cities. I met Doug Engelbart.

I worked on the Space Station project. Would this help us harvest sunlight in space? No, my boss told me. The microwaves scared people. My boss didn’t say how he knew this. He didn’t know if people were more scared of microwaves than flooded cities. No one asked. All he knew was that if we planned certain parts, we would get paid.

Every year we found a way to make the Space Station smaller, so it would cost less. Doing this cost a lot of money.

Other men made a television commercial, to tell people about the space station that was already there: the one with Russians in it. They showed their commercial on television. It scared people. That scared them, so they didn’t show their commercial again.

We used mice, and hypertext. Governments and corporations built nets of glass fiber. We sent information through the fiber, more and farther than any radio. The fiber wrapped around the Earth, again and again. The fiber swallowed its tail, and squeezed the earth smaller and smaller.

Culture explodes. The world collapses. The fiber shrinks, toward an event horizon we cannot see through. We look sideways through tunnels of glass, curving steeper beneath us. We hear our own voices. We see our own faces, and change again. We fall into ourselves.

It’s easier than looking up.