The Rhetoric of Equestrian Bronzes

This project proposes a crowd-sourced sound map of the world’s monumental metallic statuary.

Most current smart phones have all the necessary elements except quality microphones and better than voice grade recording software. We’ve tried a number of alternatives to dedicated digital recorders, with mixed success: 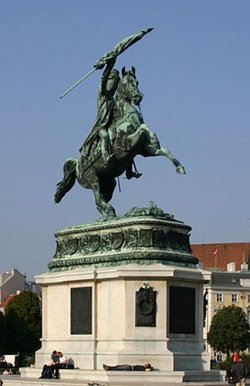 Bronze and iron statues—which, unlike stone, are almost always hollow—make interesting “natural” resonators for ambient sounds (see Midsummer 2010 for examples). Because each has a certain mass, unique convolutions and construction, and other peculiarities, they impart a certain character to the sounds they pick up. And since they are fixed in place, they are always being stimulated by the characteristic sounds of their surroundings. While some occupy parks and pedestrian malls, others are fixed atop fountains or in the centers of traffic roundabouts. The variety of sonic stimulus and response is—well, must be—staggering.

The sonic aspects of these monuments could be captured as sound files, their locations recorded by GPS (or entered later by the recordist). Locations could then be represented graphically by icons on a world map, hyperlinked to enable playback. The same web site used to display the sound map can also provide a way to collect contributions. One excellent example, now mothballed, was the BBC’s Save Our Sounds audio map of the world, part of an ongoing project designed to solicit new samples from all comers.

[Update 2020-04-19: A surviving sound library platform that supports geotagging is the freesound project founded by the Universitat Pompeu Fabra of Barcelona, Spain. Given freesound’s survival through fifteen years of internet evolution, we are porting the majority of our sound samples to that platform and encourage you to support it.]

Sample collection follows the tourist photo model. Participants wander the globe—or just their hometown—in search of indigenous cast bronze or iron statuary. Upon encountering a likely specimen, the recorder captures the sounds of the statue for submission to the sound-mapping project. Some approaches: