2010-11-08: We posted notes on our latest investigations into Android mobile phones. Here’s what a mobile phone equivalent to the Sony PCM-D50 digital recorder looks like, circa 2011: the Xperia X10.

It’s not so straightforward typing on the phone as recording has become. Look here again soon for a discussion of our current experiments with Android and the Xperia X10. (This edit made from the phone. [User:Mr Yesterday] 09:49, 10 November 2010 (MST)) 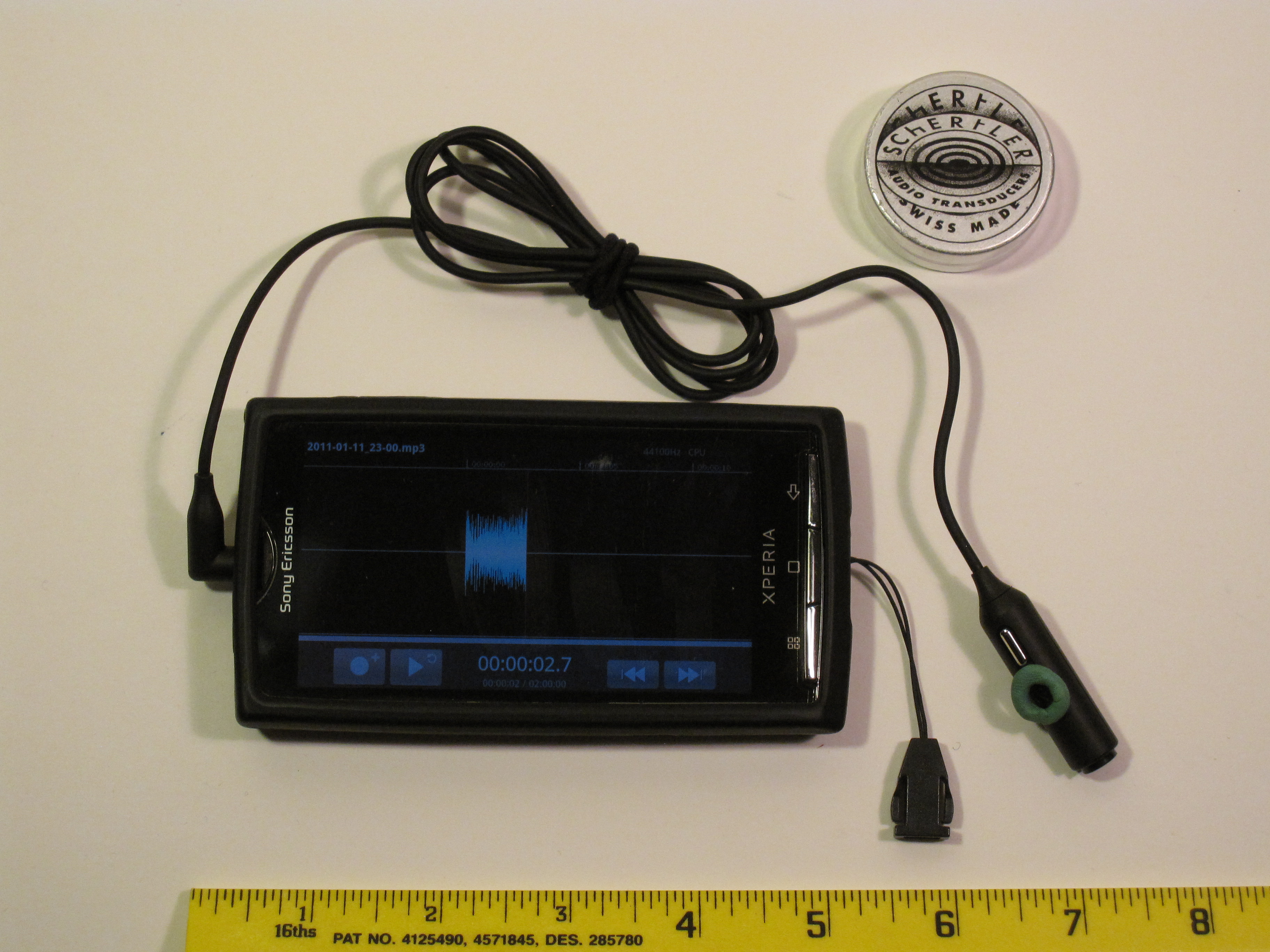 Dave’s latest mobile [as of 2011] is a Sony/Ericsson Xperia X10. Starting on Android 1.6 and upgrading to 2.1, we find the service acceptable and a range of recording apps widely available. Here’s what a mobile phone equivalent to the PCM-D50 looks like.

Note: AT&T is no longer carrying or supporting the model as of late 2011, and without Flash support on the older Android 2.1 OS, this has gotten increasingly disappointing. It’s a consumer device and obsolete almost the day you buy it, alas.

The X10 running the Samalyse TapeMachine app (formerly €3.99 from Samalyse) seems to do a quite serviceable job of capturing CD quality sound using either of the two mics built into the phone’s body or using the wired mic that comes with the unit as a contact microphone. Note the Schertler putty used to isolate and attach the wired piezo mic to a resonant object—it’s the green ring around the little black barrel at lower right.

You’re probably already shelling out for a smart phone, so the minute cost of some putty to adhere the X10’s wired mic makes it nearly free. Early results include a clean sample taken with and edited entirely on the X10:

Is this really all you need to replace $500 and up of dedicated recording rig? Of course not. But as a utility-belt tool we find it’s pretty serviceable. It attracts no attention in airport security linesmdash;which the PCM-D50, with its Geiger counter look and feel definitely does—and doubles as a handy phone. So you are likely to have it with you when the urge to record, say, the Eiffel Tower strikes. It’s like a cheap little point-and-shoot camera for a photographer: better than nothing, and a low-risk, low-cost throw-down when you need one.

Mic options are somewhat limited. Use the wired mic that comes with the phone or the mics built into the phone body. The X10 has two: one on the lower front for speaking into, one on the “rear”—the side, really—for speaker-phone mode when the phone is placed face down on a table.

When using the built-in mic, be prepared to hold still. Hands touching and clothing moving near the phone come through loud and clear, as do “macro” noises like jarring of the case. Set it on a solid surface and it will pick up vibration from surroundings as well as ambient sound, so use a cushion or rig a shock mount if you want clean environmental recordings (Remember, it’s a phone: don’t expect a tripod mount).

For contact miking, don’t bother trying third-party mics. We recommend using the included piezo mic with putty to rig up a decent contact microphone. Be careful not to foul the little hole or depress the switch (used to “switch between your Music and Incoming Calls”) with the putty! The button on the mic disables recording.

Note that when the phone’s headset jack is occupied by the plug for the mic, the only available earphone jack is on the mic body itself; this design allows you to use a set of “earbuds” as a telephone headset, but it places the listener at the wrong end of the cable for a contact mic application. Since the X10 does not appear to support monitoring while recording, we recommend dispensing with earphones and using a recording app that has a good visual metering display (one of the reasons we like TapeMachine).

We’ve had next to no luck using any external device other than the one included with the phone, due to an active circuit used to detect button press on the mic. The mic appears to include an active component (may be as simple as a single transistor or diode), suggested by the asymmetrical resistance across ground and mic leads. Most iPhone gear just shorts mic to ground, but this phone appears to want a gentler touch. A quite audible, periodic, unipolar click appears on the recorded track if an iPhone-compatible mic is used.

We also strongly recommend you do not lose the headset as it is nearly impossible to replace at US carriers’ outlets as of early 2011. The MH-700 upgrade Sony/Ericsson sells is unavailable in many countries, and it’s merely pricey if you happen to be spending enough time in Sweden or the UK to mail order it for local delivery.

So for those of you who are curious, or just choose to ignore our advice above, here’s what we found when we rigged a sound check with the Schertler DYN-E-SET.

You can see the bulky test setup in the photo. Much of the cord spaghetti resulted from adapting a ready-made four-conductor cable to separate the various signal paths. For this first test, we ended up using an AV cable for a Canon video camera. This put the various outputs on the “wrong” RCA plugs but allowed us to map the X10’s jack pinout. Starting from the tip of the 2.5mm plug, the four conductors are:

The audible clicking heard using an iPhone mic is less noticeable with this heavier gear. It takes the phone a minute or more to detect a low-impedance source like this and then deactivate the built-in mics; in fact, we couldn’t get standard dynamic mics like a Sure SM58 to work at all.

This test is also how we discovered the X10 doesn’t support live monitoring with LivO Recorder Pro. We suspect it is a hardware limitation affecting all software, or maybe an Android artifact. We verified the same behavior with TapeMachine. 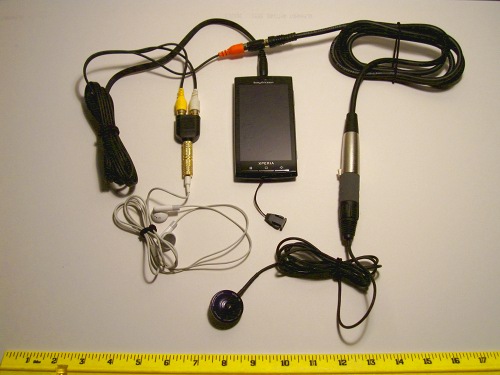 The Sony/Ericsson Xperia X10 is smaller and lighter than the dedicated machine, yet still boasts a 96k sampling application.

Where the X10 loses: 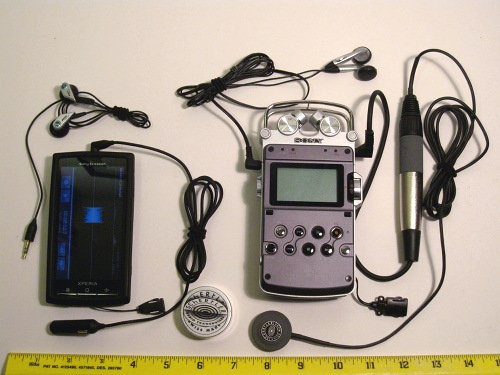 If the recording quality were as good, size alone would recommend the X10

For recording ambient sound centered around one kHz (the spoken word), the X10/TapeMachine combo is lightweight and potent. Of course, if you can afford the space, extra weight, and higher price tag, the PCM-D50 is a far superior recorder. But the convenience of having recording capability with you at all times is hard to beat, now that apps and audio circuits are catching up. We’re one step closer to the ubiquitous quality digital sound recording we’re after! Keep a smart phone with a recording app handy.

If you are into contact microphone applications, however, the PCM-D50 paired with a real contact mic like the Schertler is a far superior setup. Until we discover another compatible mic, a workaround to enable traditional contact mics, or a suitable mod to the X10’s wired mic, the X10 setup cannot be recommended for serious object acquisition. We’ll keep this investigation open, and results will be posted here. But for now, the PCM-D50 and Schertler dominate our travel kit.