2010-06-09: We sampled the bronze in Stockholm and Uppsala in the nearly endless midsummer twilight.

In 2010, I spent some time around Stockholm a couple of weeks before Midsummer, when the northern light almost never fades. My friend Martin served as guide and photographer as we walked around Östermalm and the palace area one evening.

Having sampled a bit of Stockholm, Martin had business in Uppsala the following evening, so we drove north. At the university there, we chanced upon an opera rehearsal in progress and an art performance in the cathedral. Neither venue allowed sound recording or photographs. But we did find some sculpture to investigate. 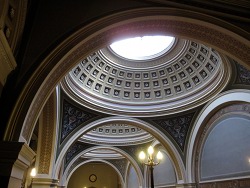 
In the early morning, I managed to capture the sound of a few trains on the pendeltåg (commuter train) platform in Årstaberg. I was completely unprepared for the amplitude of the wind noise I encountered walking along the platform, which accounts for the nasty clipping in the first of these files. The sample with wind and gulls is an excerpt after a lot of cleanup (click-filtering followed by normalization).

There are no visuals to go with these three files, but I find they conjure up images anyway.

We hit Stockholm on foot that evening, unfortunately after it had turned a bit damp. Among the more unique sculptures on this walk, Margaretha Krook’s life-size bronze—shown with Martin standing on the corner outside “Dramaten”, the Royal Dramatic Theatre in Östermalm—is also a radiator. The sound of the circulating water resonates through the bronze, shiny from constant touching.

The recording has a high-pitched whine I haven’t managed to identify. It’s persistent though not entirely objectionable. The second, normalized file is filtered aggressively to remove it and emphasize the bass resonances. 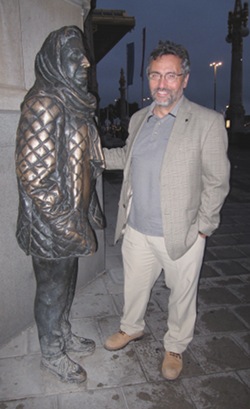 This bronze horse is one of a magnificent pair guarding an open square downtown. I’ll try to unearth some more information about the specific location later. The sound of tires on the wet pavement nearby is picked up very clearly in these recordings. 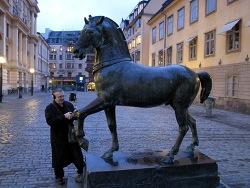 Recording this seated nude, I was struck by the sound of footsteps resonating in the cavity. Martin and I were the only ones visible on the street, and I imagined a staircase in one of the nearby buildings as the source.

In front of the Royal Swedish Opera (“Kungliga Operan”) is an imposing monument to Gustav II—King Gustav III founded the opera company, but this building is a century younger—in the middle of its own rotunda. This was a fine example of how difficult it is to actually get a recording of an elevated equestrian bronze, but with a consolation prize in this case of several outsize figures near the base of the pedestal. 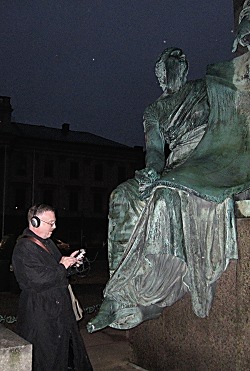 Not far from the Opera building is a broad bridge over water leading towards the Royal Palace. The bridge is flanked by a pair of rather tired-looking lions. These smaller bronzes have a predictably higher resonant pitch.

By the end of the evening I must admit to being thoroughly lost. We stumbled upon this odd rooster—it is hard to tell whether it is a one-legged bird, or the right leg is just flung back as it runs—which gave us this recording of filtered pedestrian conversation and street noise. 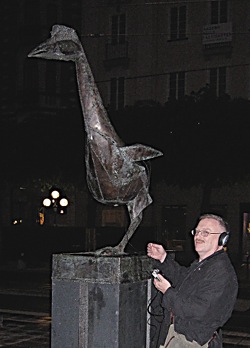 
Our one notable capture in Uppsala was Olof Bernhard Hellström’s “Befrielsen” (Liberation!), a tribute to Dr. Martin Luther King. Once you recognize the sonic potential of large bronze vessels, something like this seems made for sound. The two massive fists are posed two-thirds of the way up separate bars and can just be reached from the ground. And because of their unique shapes, the tones are subtly different. (For other sculptural examples, see Listening to Jun Kaneko and Monumental Denver.) 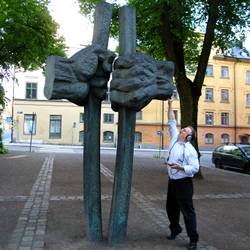 All audio files on this page now licensed under a Creative Commons Attribution 4.0 International License 2010, 2020 D A Ayer.

Photos this page © 2010 Martin Hatas except as marked. Used with permission.