On Saturday, February 26, 2011—after days of being teased with a forecast of snow from local news channels—Jacob and I made our second foray across the bridge together. There was no snow, but in all other respects it was a nearly perfect day: high visibility, some wind (OK, sometimes a lot of wind), and no rain; light to medium vehicular traffic; light foot traffic on the Marin side, mostly joggers out for an early Saturday constitutional.

As long as we’re going to obsess over this bridge, a bit more about the walk is in order. Park at the north end in Marin County. (Take the long way around over the Richmond and you’ll skirt tolls if you’re heading back toward San Jose.) The bridge walk opens officially at 06:30. It’s a nice, gradual approach from the north scenic overlook parking lot, a bit over one-quarter mile to the first concrete pier and emergence of the main catenary.

Here, in early February 2011—as in October 2009, according to our notes—construction is in progress. There’s cyclone fence in place up to the second suspender cable cluster, and a very ominous sign warning about trespass where the catenary safety cables rise through the pier (We decided to stay on the right side of the law this day and not step up onto the stainless steel signaling box to snag a signal at this north end appearance). So we started our reconnaissance at the second suspenders.

In a bit of serendipity, Airship Ventures’ Zeppelin N-704LZ “Eureka” flew by as we neared the center of the span. 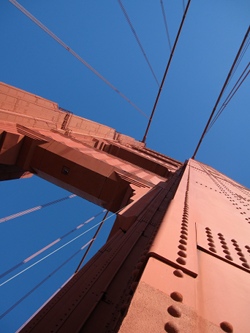 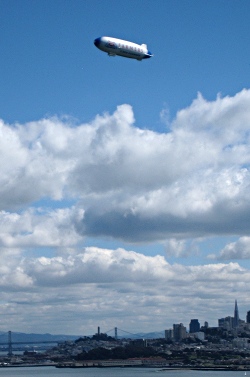 A note on designating cables

Someday we’ll get a look at the original engineering drawings and adopt the proper designations. Until then, we’ve adopted a simple naming scheme based on walking, counting, and compass points. These are, roughly, and from north to south, west (left) to east (right):

Using this scheme, the center of the bridge is at suspenders NW63/NE63. And if you count from the south approach, the equivalent appears to be true in that SW63/SE63 are at the same latitude (the bridge runs very closely north-to-south).

During the first two assays of the Gate, we sampled only one of the four cables in each suspender cluster. That’s understandable as a gross first-approximation method. Jacob asked the obvious question this time—Do all four make the same sound?— and we focused in a bit.

They do not make the same sound. Each cable in the cluster is working hard on its own. Maybe it’s an effect of wind loading or something else mundane, but it suggests an additional layer of sonic complexity. So several of these samples are sets representing not just cables, but clusters:

We also had a chance to reinvestigate the “outer space howl” from assay 1. That first assay used a piezo mic and an improvised pickup; this time, we brought the Schertler to bear and captured an interesting sample from the south handrails.


Cluster NE02 is the first set of suspender cables you can reach on the pedestrian side of the cyclone fence. Only the cable nearest to the camera was sampled. 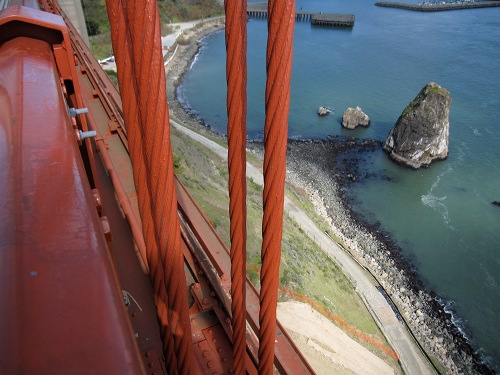 After listening to NE16, we walked back to suspender NE10 to sample all four cables. The view is to the southeast; NE10NW is closest to the camera.

At suspender NE13, we checked to see whether anything special was happening. It was similar to 10 and 16, so we moved on.

Suspender cluster NE16 is where we first sampled all four cables. The outer two—NE16SE and NE16NE—proved far more noisy and active than the inner pair. We expect this varies a lot with conditions.

NE21 is closest to the north tower and sat in shadow. There’s a lot more road noise on these suspenders, and sounds are in a lower register. They’re the longest cables, but connected to the catenary very close to the tower. Again, the sounds of the four cables were quite distinct.

Suspender NE42 is one quarter of the distance across the central span as you head south. We guessed it might be a harmonic node of some sort, but that’s hard to test. 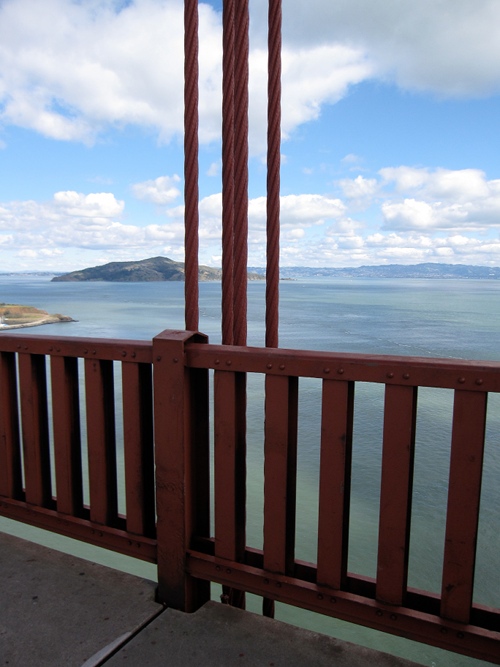 Suspender NE063 is at the center of the span. There are lights and foghorns, along with plenty of razor wire to discourage climbers. 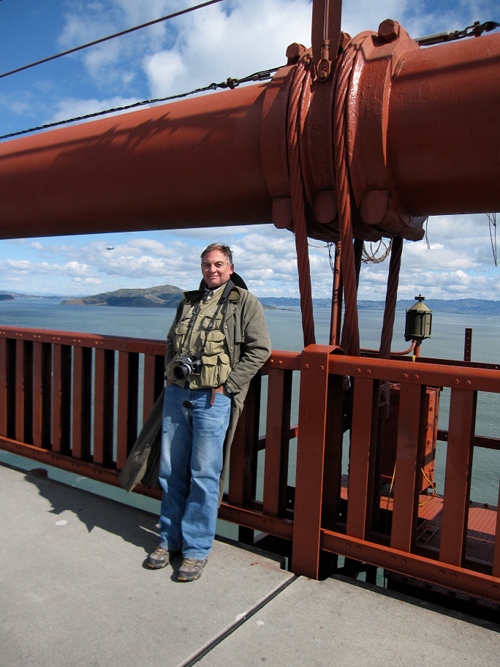 The inner safety handrails run down from the south tower and through holes in the south concrete pier. These are the longest “thin” cables we’ve found that you can attach a contact mic to. The sounds are very complex and deep, especially if youhave a subwoofer handy. 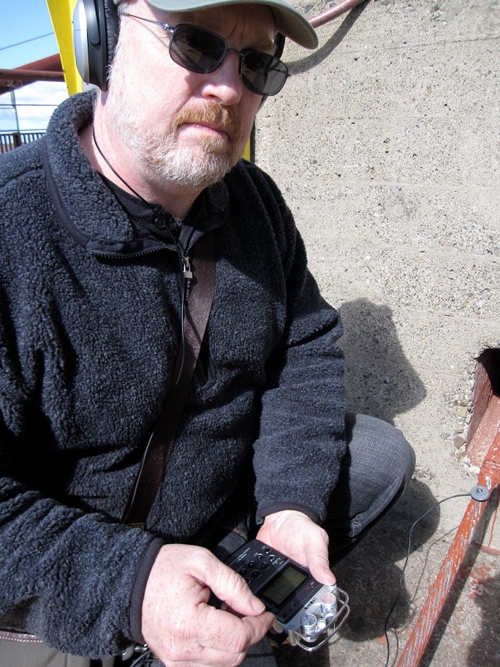