The Denver Millennium Bridge opened in 2002 as an extension to the Sixteenth Street pedestrian mall. It’s a pleasant three-block walk northwest from the renowned Tattered Cover Book Store which, in 2011, was pretty much at the end of the mall. It appears that won’t be the case for long, as construction projects abounded here and elsewhere in Denver when we visited.

We’ll be experimenting with how to post GPS coordinates in a device-friendly format (a link to send them to your phone?), but for now we’ll settle for a link. First, get to Denver. Here’s the Waymarking.com page with GPS coordinates and a bit of background on the bridge.

The bridge’s main mast is readily visible from many places around the city, and it’s a bit surprising to learn it is not some enormous structure but a pedestrian bridge over rail lines near the South Platte River. The broad upper deck will presumably extend the Sixteenth Street pedestrian mall seamlessly once the construction finishes and the orange safety cones are removed at street level. 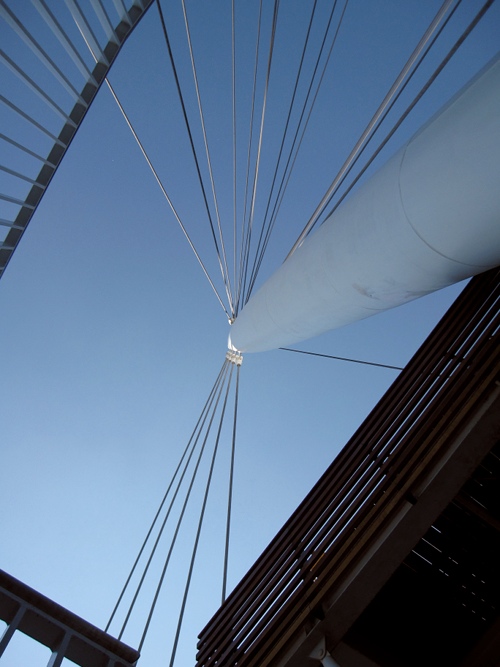 One of the aspects of bridge design and engineering that fascinates us is a tradition of simply scaling up traditional hardware to do a big job. These tensioning mechanisms look like magnified and slightly streamlined bicycle brake cable ends, and they imply the existence of 12″ open-end wrenches. Such things apparently do exist and are used regularly in civil engineering projects; we just seldom see them lying about. 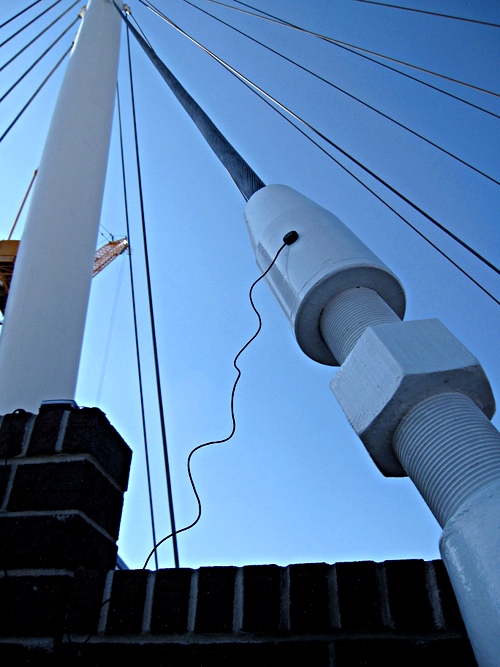