A Walk Up Lafayette Street

2012-07-29: Listening to the Lafayette Street infrastructure Dave drives by daily, where strange energy seems to be passing.

At the tail end of July, 2012 I spent some time up close and personal with a bit of the infrastructure I drive by daily en route to work. The Santa Clara County freeways have largely bypassed old, industrial Lafayette Street, which connects Alviso’s Gold Street in the north to San Jose’s Bascom Avenue (via Santa Clara’s Washington Street) and then segues into Los Gatos Boulevard before petering out in the Santa Cruz foothills to the south. I realized four or five years ago that most of my favorite Mexican restaurants in the South Bay front this bit of roadway, but that I’d never walked the walk and connected all the dots because the street has so many names.

If you exit Montague Expressway at Lafayette, you get to bypass North First Street and the aggravation of rush-hour traffic surrounding Cisco (at least, until the 49ers’ new stadium is completed, and then all bets are off). I was seeking inspiration at the time for our upcoming SoundWalk 2012 performance of Oracle du Jour. Oracle had bought Sun’s Silicon Valley campus—I’d watched the signs go up during during the dot-com bubble, seen them covered in 2010 and finally replaced last year—at Agnews so there was a daily reminder of some serendipitous connection. When the weekend rolled around, with little more than Internet spam to use as material for our piece, I decided to turn elsewhere for inspiration.

This is just one of those places on the earth where strange energy seems to be passing; maybe not energy you want to live near, or underneath; some sort of ley-line intersection or other spooky conduit thing you have no business believing in. Read about Alviso and some of the thoughts it conjures up at Eric Carlson’s old site. Things stick up out of the earth here—the new stadium, high-tension masts, the old Agnews “Great Asylum for the Insane”—and as I drive by I often wonder whether any of them speak.

Some of them do. 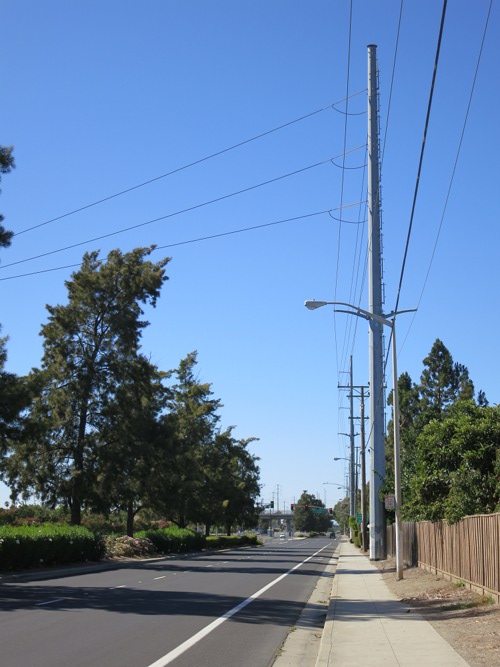 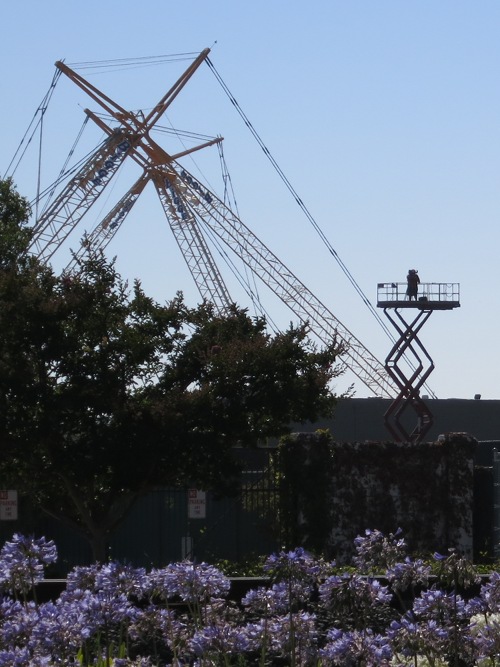 Pull off Lafayette onto Agnews Road and park. Walk back and head south on Lafayette to encounter pylon PLM NAJ 1. What’s missing is the expected 60 cycle hum. But cars passing by on the street create resonant sounds inside the column. 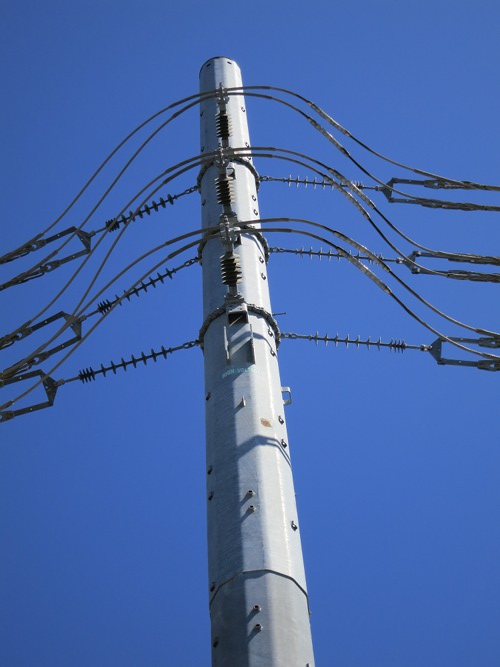 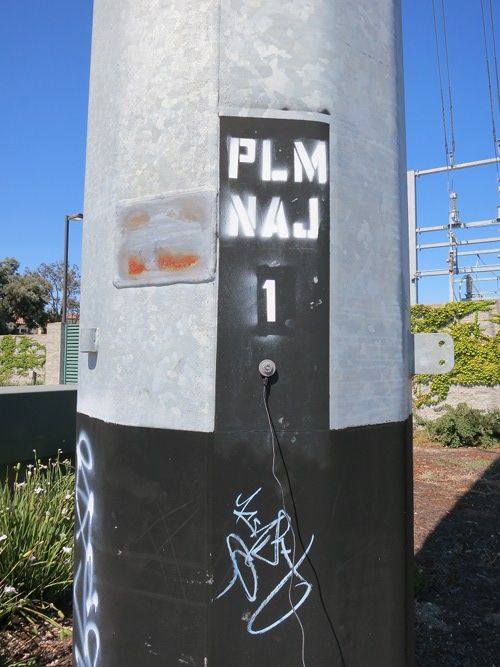 Walk about twenty yards further south and you meet pylon KFR PLM 55. Both pylons PLM NAJ 1 and KFR PLM 55 stand outside a substation here, but carry lines running along different sides of Lafayette. If you increase the volume on the KFR PLM 55 sample, you can clearly hear the electric buzz that was missing at PLM NAJ 1. 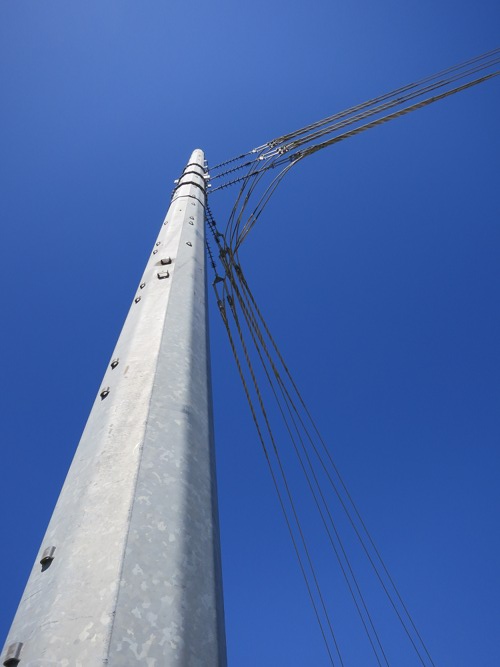 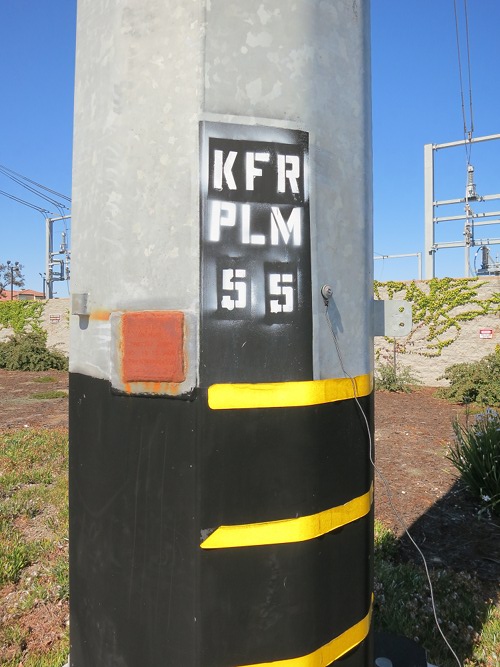 Continue south, seeking resonant metal objects, and you’ll find results are mixed. The high-voltage cover was round, well-clamped and bolted in place; there was only a distant, low, 60 Hz hum, not even menacing. The square low-voltage cover was loosely placed atop the concrete framing the hole, and picked up a fair amount of resonant noise from cars passing on the street. The fire hydrant was about as mute as one might expect; but again, ratchet up the volume and you’ll hear that 60 Hz hum. Ferrous metal objects lying ten yards beneath the high-voltage lines are resonating more than the pylons holding the lines up. 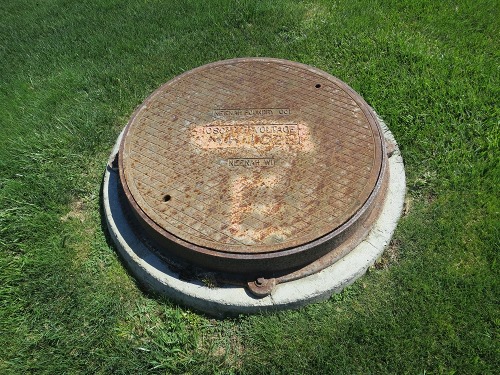 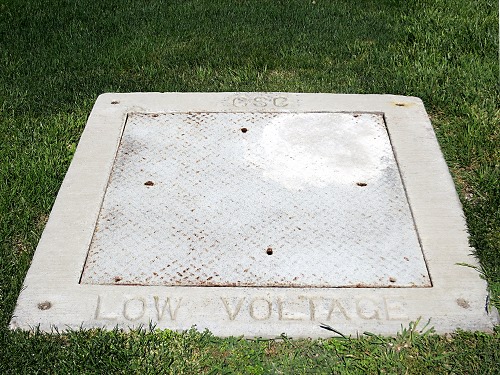 I expected a lot from this stand pipe out in front of the Oracle campus. I didn’t get much except good ol’ 60 cycle hum until the last sample. That one made my heart beat faster, because the longer I recorded, the more static appeared in the earphones. I began to feel like a lightning rod, standing there attached to a big chunk of iron under the ominously power-carrying lines above, accumulating a charge. But that noise build-up is the only exciting thing about the recording; otherwise, nothing to see (hear) here. 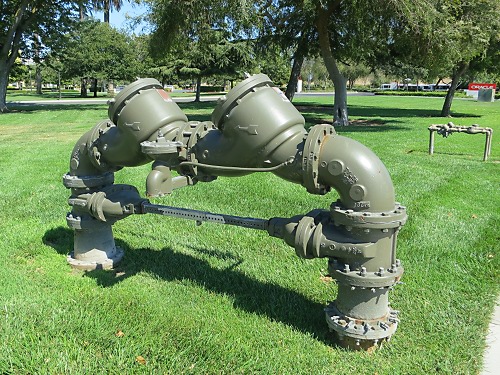 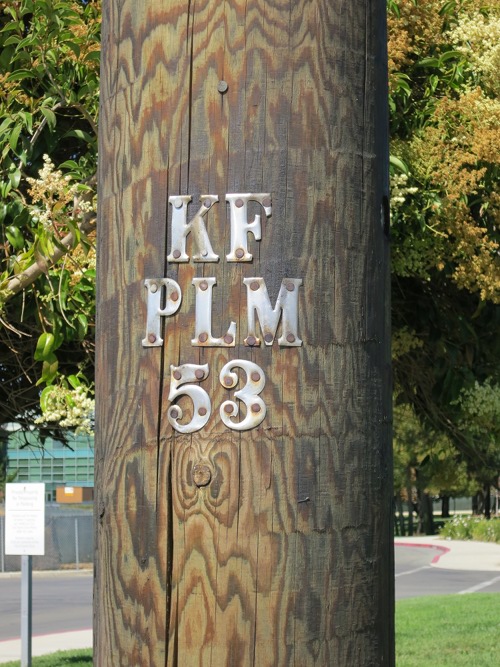 So I moved on (north) up the street and turned off on “Fairway Glen Drive” to park. (Yes, there is a golf course nearby, if no longer visible from here. Or maybe there was once a course for the Agnews physicians or inmates?) Heading up the road another twenty yards, I hit pay dirt.

The bay breeze was picking up as the afternoon grew older, and it was clearly doing a lot more than was visible. A soccer practice was going on across the road, over by the new stadium. But nothing is touching this lamppost besides my microphone. The wind, cars passing by, and occasional jets overhead are making all the noise. I kept recording for three minutes because the composition seemed perfect. 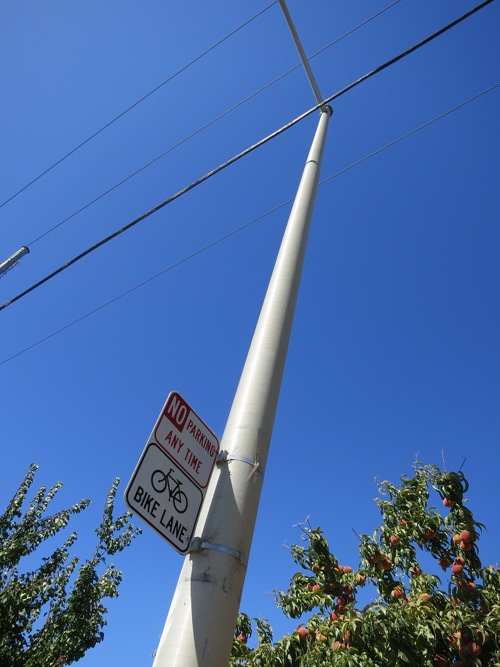 Head north some more, and you come to another power pylon. Trees hang over the residential privacy fence and rub on this pylon when the wind blows; that’s my explanation for the bird-like sounds. There are two takes.

The next lamppost to the north was pretty nice, too. The sign is larger, so I expected more sound than at the first post with its smaller sign. I found this one just fine, a bit more frenetic than the first, but not sublime. This is followed by another power pylon, much like the first but without the shrubbery. 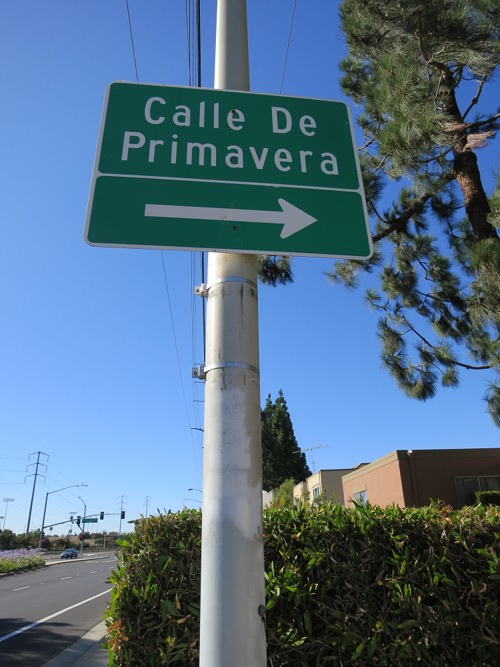 The traffic signal on the corner wasn’t doing much, so I went ahead and pressed the pedestrian crossing button about 30 seconds into the recording. 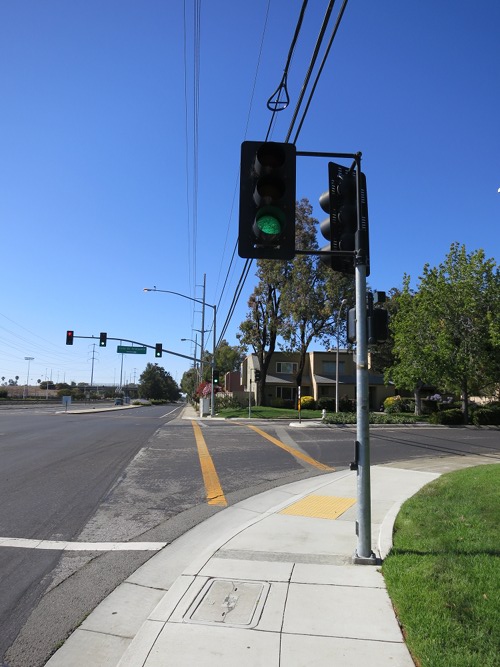 The Amtrak train had come and gone several times over the course of the afternoon, and struck up a mournful chord just as I reached the car. I didn’t get the recording I wanted, but it seemed a fitting end to the day. Time to head home. 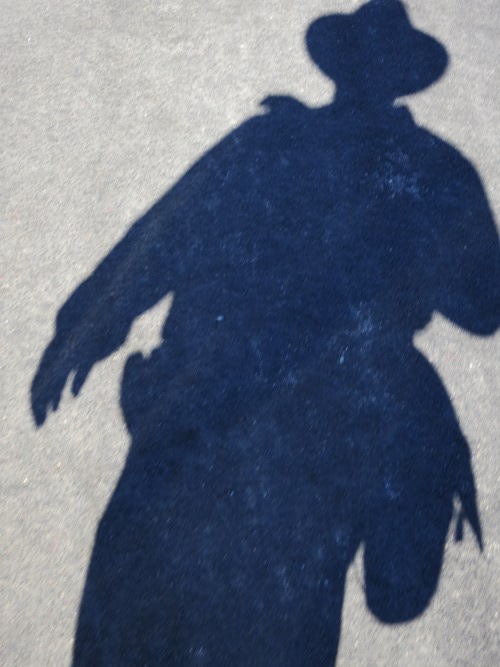 All audio files on this page now licensed under a Creative Commons Attribution 4.0 International License 2012, 2020 D A Ayer.