Every now and then something comes along that requires a bit of distance and a lot of bass: seismic survey trucks and commuter trains, for example. We spent a couple of nights researching kick-drum mic options and then Jacob opted for a rental. The massive nature of the setup leaves little to the imagination. The black “dongle” in the photo is the phantom-power battery pack.

In use? It’s every bit as massive as it looks. Lightweight by 1970’s standards, of course, the M-Audio Microtrack is dwarfed by the phantom powered field mic in this experiment. Note the classic juggler’s hand position used to aim the mic, access the recorder pushbuttons, and keep the battery pack from dangling.

Jacob’s posting the results of the latest Long Beach geophysical survey on ccMixter. Those interested in this offshoot of our investigations are encouraged to check out the Center for Land Use Interpretation‘s web page for a look at oil prospecting and its impacts on surrounding urban ecosystems such as Long Beach. 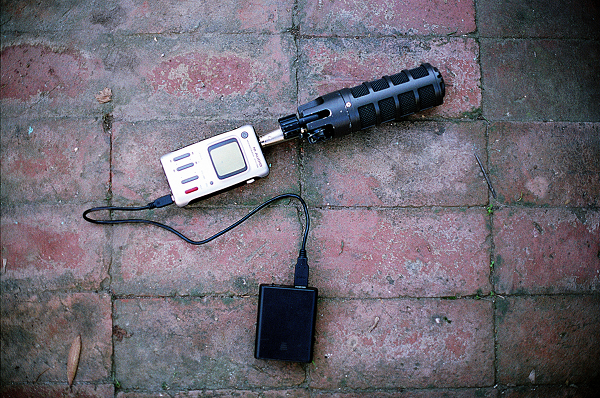