Song of New Abalonia is an ongoing multimedia work first presented on June 4, 2022 at the sound art event soundpedro2022, held at the Angels Gate Cultural Center in San Pedro, California. 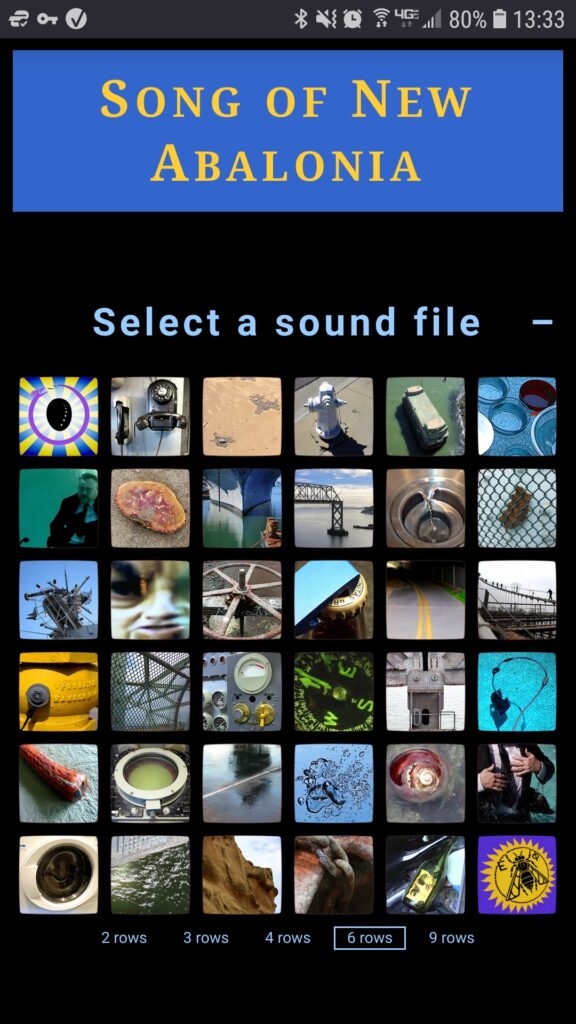 As with many wikiGong.com projects, the New Abalonia theme emerged from the acts of exploring and collecting—readings, including literature and the news; walks and field recordings; and discussions, often just riffing on the Zeitgeist—that followed in the wake of our prior projects. The concept of extra-planetary probes somehow conjured messages in bottles…whose popular association with shipwrecks led us to Bishop Rock…and thence to Chris Dixon’s surfumentary book Ghost Wave, where a prior “Abalonia” first came to our attention…coinciding with the eviction back out to sea of hundreds of container ships piled up outside the Port of Los Angeles in the wake of COVID, a veritable ghost fleet at station-keeping for months out near the Cortez Bank. So we set out to evoke a maritime nation based on salvage:

Sovereignty, Sanctuary, Salvage. The motto of New Abalonian society reflects a triune principle: Sovereignty, or freedom; Sanctuary, or safety; and Salvage, the source of all our material wealth.

…and the project spun out of control from there.

The Song of New Abalonia app

I used absong to create the sonic backdrop for half of our video presentations on the evening of the live soundpedro2022 event. (The original plan had been to use the app on a cellphone but, since we were running video shows from two laptops already, it was more efficient to skip downloading and just browse to a local copy of the page.)

We’re keeping the page posted so wikiGong.com visitors can compose their own versions at any time. Like Pour Your Own (musique) Concrète, Song of New Abalonia is free to use, sample, and remix under the minimal terms of a (cc)BY license, so feel free to have a go! Help is available in case operation is not obvious.

On the inevitability of bugs

Even script-driven web pages rely on the behavior of browsers, which is…complex. From the current Help file:

Apologies
2022-05-30: We’re working on two persistent bugs related to Safari:
— In the previewer, the loop function may not work for certain samples unless each sample’s end has been manually set to a time slightly shorter than the sample’s duration.
— In a queue of samples, the effective start time for a sample is always 0 whenever the auto button is selected, and during the first play through the sample if once and loop are both selected.
Both issues appear related to the handling of queries of HTML5 media players.

This has so far proven to be a challenge to resolve gracefully, but we’re working on it. 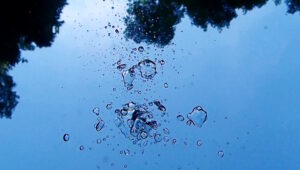 Breath of Heaven is a meditation on air and water. Most life depends utterly on the balance between these two transparent, fluid mediums; yet we perceive their boundary only indirectly, through change, and dependent very much on which side we happen to be on at the time. Bubbles rising, for example, make surprisingly intricate sounds if you happen to be under water and listening, or otherwise adequately equipped.

Content was created using a tire pump and captured using a hydrophone and underwater camera. The thirty-five second loop cycles five times, with increasing reverb the only added effect other than mastering for video.

Breath of Heaven is now available on both Vimeo and YouTube. 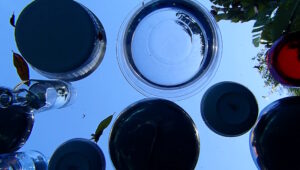 Prayers Unspoken marries a long fascination with the sound of gamelan ensembles with more recent investigations into aeolian music. The work foregoes traditional rhythmic elements in favor of random microtonal events driven by the wind. “Unspoken” is here intended to suggest a ritual of un-speaking—removing from the everyday, literal realm—rather than a suspended intent.

Content was created using a collection of household vessels floating on the surface of a backyard swimming pool, captured using a hydrophone and underwater camera. No reverb or other effects were added; audio processing was limited to peak adjustment, trimming loops, and mastering for video.

Prayers Unspoken is now available on both Vimeo and YouTube.

Our June 4, 2022, appearance gave us the opportunity to roll out various aspects of the project while continuing to refine it. Some work is intended for live audiences; other material can be experienced online/whenever.

On overreach: which should probably be our actual motto

We’d been asked to present both our submitted concepts for the live event, based on our original proposals:

wikiGong presents an audiovisual portrait of an unknown maritime nation.

New Abalonia is that sovereign Nation comprising all objects afloat beyond internationally recognized territorial limits and not formally recorded as autonomous vessels by a globally recognized seagoing power. These are immediately and irrevocably claimed by the Nation, in perpetuity*:
— all commercial shipping containers lost overboard along with their contents
— any unregistered ships, boats, submarines
— the Great Pacific Garbage Gyre
— icebergs and all objects thereon, regardless of origin or state of matter
— space launch vehicles and marine growths attached
— flotsam and jetsam

The New Abalonian National Anthem is a work in progress.

* After further research on maritime salvage law, we’ve decided the New Abalonian constitution could use some work, too.

A live staging and re-presentation of some of wikiGong’s recent video projects, The Bottled Now seeks to exorcise two years of pandemic navel gazing by using our visual oeuvre as it is nearly always inspired: to enhance performance.

While the trope of messages in bottles endures, wikiGong.com has pointed out some serious problems. It is fraught with difficulties, from finding the required media, to understanding and interpretation by the recipient. Any pandemic survivor knows it.

Our first effort to manage expectations re: messages in bottles as a communications medium, Message in a Bottle, was part of our Cosmology series. It’s a meditation on the nature and fate of intelligence in the universe.

That flirtation with messages in bottles may not have been explicit enough, so as a public service, in On the Efficacy of Seaborne Bottles in Solicitation of Rescue (originally part of the soundpedro artist-curated event, Dark Waters) we review it: Relying on these to bring rescuers to your desert island is Not a Good Idea.

We propose to revisit these themes by layering live text readings and interpretation with the prerecorded dramatic and scenic audiovisual content, recapturing and re-projecting the results throughout the evening.

So, if the project wasn’t out of control at first, it certainly accelerated toward chaos as we attempted to present two acts in one.

Since soundpedro2022 had a large footprint—over forty presentations spread across several acres of the Angels Gate Cultural Center—we started with a distribution of yard signs. I figured not everyone would find us without direct guidance, so the signs were designed to tease as much attention as possible out of a single sighting. First, and most obviously, they functioned as posters.

The background flag image was originally designed to fly from Fort MacArthur’s vintage flagpole, but the sponsoring organization had dibs on the position and there were no accommodations for flying a second flag. That was OK by me; large, quality flags are expensive to have custom-made, though it would have been a hoot.

The imagery reflects the theme, in general, with some current-events inspired colors. I particularly enjoyed crafting the Ouroboros of Supply Chain Disruption out of tiny silhouettes of container ships. 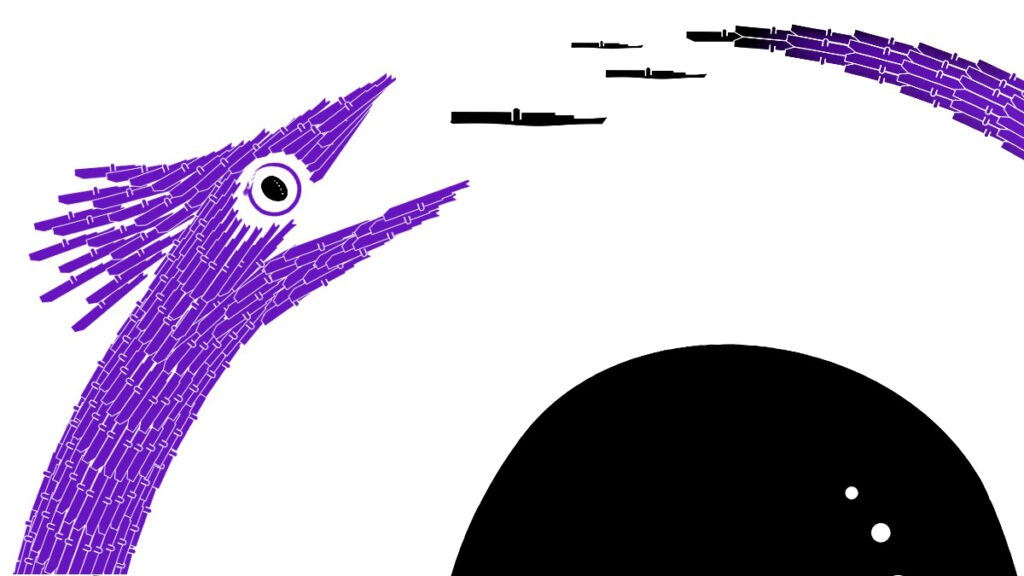 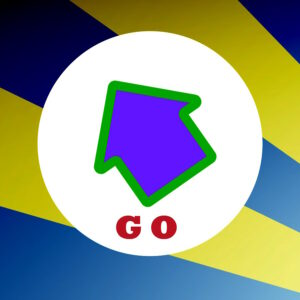 An adhesive sticker points the way to the event

In case you’re interested, I sourced our yard signs from Banners.com, whom we’ve used before and recommend highly for artists on strict budgets who nonetheless need a little PR pizzazz. They also do flags and, unsurprisingly, banners…and quick turnarounds! I used an EPS file format, as they recommended, and the detail on those little container ships in the finished signs is exceptional.

Since we could only guess at sign placement in advance, I added a directional arrow to be slapped on based on where each sign was placed, above the directive “GO” (which was pre-stenciled on the printed poster).

The result of scanning the MAP QR code

During the pandemic, the use of QR codes by every community organization with a poster to print seems to have proliferated, along with QR-linked menus and cellphone ordering even in sit-down restaurants. I decided we’d adopt the practice ironically with an eye toward expediency. Want to find us? Use the MAP code.

The link points to a map for viewing on a cellphone with directions for finding our performance area at the AGCC campus. FLOOD also published their own PDF map of participating acts, which gives an idea of the complexity of the event. 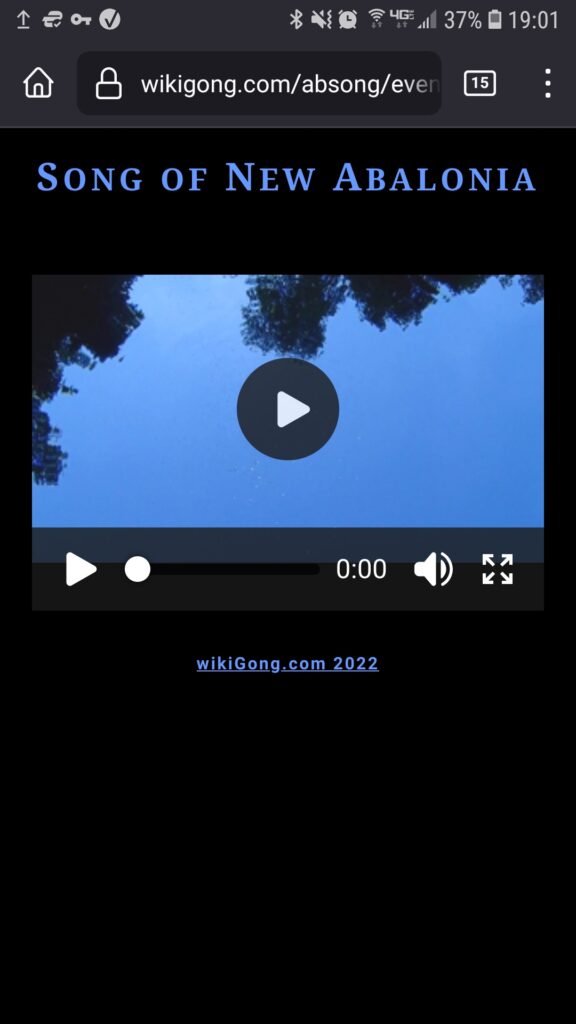 The ZAP QR code launches a loop of our motto

ZAP launches a teaser video, Motto, a 34-second video loop introducing the New Abalonian motto, “Sovereignty, Sanctuary, Salvage”. I kept it very small, assuming cellular bandwidth might get pretty congested out at AGCC on event night. Whether it can induce ASMR is up to the mind of the viewer.

If I have any disappointment about the yard signs, it’s that only one turned up missing (theft outright being the second-most sincere form of flattery). On the other hand, we have nine reusable signs. The individual pages referenced by the QR codes can be rewritten to display content for a future event, while the signs can stay as they are. Cover the arrows with new stickers, et voilà!

On the predictability of landscape irrigation

Every venue is unique and, so far, every sanpedro setting we’ve been assigned has had its own unique challenges. The importance of thorough site reconnaissance cannot be overstated. That does not mean that site recon—even interrogation of helpful staff—will find all the challenges ahead of time.

For instance, we did ask about the possibility of sprinklers going off between the hours of 2100 and 2200 on a Saturday evening. Assurances aside, they did…

On Tyvek® projection screens as sails in high-wind conditions