What's new on wikiGong now appears on our menu bar and on the News page.

We exploited the wiki for this year's entry, along with a healthy dose of trackback spam from our blog. The documents, flotsam, and jetsam are or will soon be visible @ SoundWalk_2012_project.

[edit] It's all about travelogues now

Links to the new format for our assays and soundwalks are now posted right on the Home page.

After a few months of dabbling, we began reskinning the wiki and blog pages after implementing WordPress on the site. The wiki overhaul uses Sam Wilson's TwentyTen skin port. A few blog articles resulted:

It's certain we've broken a link here or there so please contact us to report any problems. 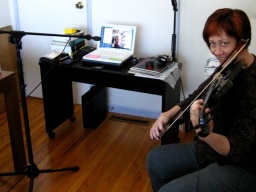 Rebecca and Jacob in the studio

wikiGong appeared at SoundWalk in Long Beach, California, on October 2. For a recap, check out our SoundWalk 2010 project page.

We had so much fun last year, we're going back. Current developments appear on our News page and at SoundWalk 2011.

We continue our efforts to protect the site from vandalism while cleaving as close to the open wiki spirit as we dare.

Contact us to sign up. Sadly, we've closed the wiki to anonymous members after too many hours were consumed fighting the barbarian hordes. Feel free to browse or to contact us for a brief chat if you'd like access. As soon as we have adequate automatic protections in place, we'll be open for walk-in business again.

User anonymity returns. Having applied some ham-handed security measures in July so we could catch our breath after our little July 1st bot blitz, we can now apply what we've learned over this past month and loosen up a bit.

Upgrade to MediaWiki 1.16.0
Again, kudos to GoDaddy! A timely update with little intervention from our end.

ConfirmEdit
Challenges designed to discriminate between software and humans should be slightly less offensive than locking out unregistered users. Logged in users should expect not to see them; those creating accounts should see them once. For more information and to add this security method to your own wiki page, see www.google.com.

Alas, in the captcha department we can't extend the same kudos to our host, GoDaddy. After a week-long learning curve we still don't have the level of sophistication we'd like running on the site. We are still open to more sophisticated measures, so please do contact us with helpful suggestions. Meanwhile for your safety, convenience, and our sanity, please bear with this experiment in measured restraint.

Due to a high vandalism rate on MediaWiki sites--and this site in particular--wikiGongMain did not accept anonymous edits throughout most of July and early August. Would-be users were asked to sign up for a user account.

The vandalism quotient rose to new heights on July 1, 2010:

Your wikiMaster put some very basic measures in place in hope of sleep between stints of patrolling these walls in July:

Upgrade to MediaWiki 1.15.4
Kudos to GoDaddy! We scheduled this update, logged back in two hours later, and it was done. Installing MediaWiki the first time was automatic and painless, and the update followed suit. Afterward, I had only to reinstate the Monobook background image we're using.

Restricted user rights
OK, this is the one we feel bad about! In July, anonymous users could no longer:

With mild trepidation we are lifting this ban in August 2010. Wish us luck.

The focus of March 2010 was getting file sharing up and operating using the ccHost engine. Please join us and fully exercise the ccHost capabilities @ the wikiGong sounds pages.
Retrieved from "https://wikigong.com/mediawiki/index.php?title=wikiGongMain:Current_events&oldid=1615"