The Golden Gate Bridge is our ongoing obsession.

The Golden Gate Bridge sound capture project spawned wikiGong.com. Our sound assays so far can be listened to on our travelogue pages:

These also have links to sound files available for mixing and download from our ccHost pages. The format is easy to duplicate if you want to upload and construct your own sound gallery.

Our eventual goal is a living sound map of the bridge, complete with photos and GPS locations; an indexed sonic "hologram" of the structure at various times and under widely varied conditions; and a library of samples for download, suitable for use in presentations, soundtracks, and musical compositions.

[edit] The rhetoric of equestrian bronzes

Overview
This project proposes a sound map of the world's monumental metallic statuary. Bronze and iron statues -- which, unlike stone, are almost always hollow -- make interesting "natural" resonators for ambient sounds [1]. Because each has a certain mass, unique convolutions and construction, and other peculiarities, they impart a certain character to the sounds they pick up. And since they are fixed in place, they are always being stimulated by the characteristic sounds of their surroundings. While some occupy parks and pedestrian malls, others are fixed atop fountains or in the centers of traffic roundabouts. The variety of sonic stimulus and response is -- well, must be -- staggering.

The sonic aspects of these monuments could be captured as sound files, their locations recorded by GPS (or entered later by the recorder). Locations could then be represented graphically by icons on a world map, hyperlinked to enable playback. The same web site used to display the sound map can also provide a way to collect contributions. For an excellent example, see the BBC's "Save Our Sounds" audio map of the world [2], part of an ongoing project designed to solicit new samples from all comers. We suggest starting with this as a model.

Sample collection follows the tourist photo model. Participants wander the globe -- or just their hometown -- in search of indigenous cast bronze or iron statuary. Upon encountering a likely specimen, the recorder captures the sounds of the statue for submission to the sound-mapping project. Some approaches: 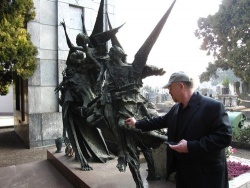 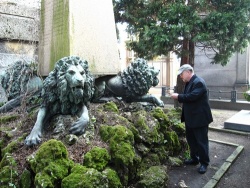 A variation on the equestrian bronze theme suggested itself when we encountered one of Milan's more unusual manifestations of the Belle Époque, the Cimitero Monumentale. We're finding human scale bronze, while visually arresting, is often a bit pedestrian in sound quality, allowing almost every ambient sound in the environment to be picked up without much distortion to make it interesting. Check out our Sounds page for a sample.

This is still a great walk if you're in the area. 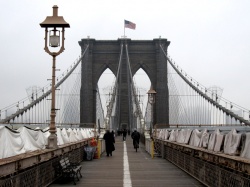 The Brooklyn Bridge has a great pedestrian walkway and cycle path. What a way to commute!

We finally got to Brooklyn with gear and time enough to walk the Brooklyn Bridge on April 11, 2011, starting on the Brooklyn side and crossing over into Manhattan. It was a gray day with low-hanging clouds and the towers of Downtown rose up and disappeared into the mists over the river.

So now we have captured the queens of the Left and Right Coasts, and finally done the audio tour John Cage made famous and Bill Fontana reprised in 2002. 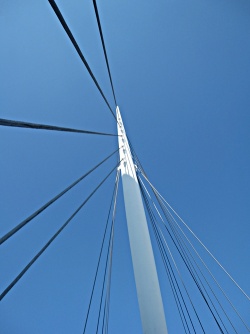 The Denver Millennium Bridge is conveniently accessible to pedestrians.

Being in Denver, Colorado for a blustery February weekend provided an opportunity for a monumental sculpture walkabout, and spawned a new page. We barely scratched the surface of Denver's monuments—and only figuratively—so we're hoping for more contributions to the page by our members.

The Denver Millennium Bridge is purported to be the first cable-stayed bridge to use post-tensioning. We took advantage of our Denver visit to sample it. Here's the page.

wikiGong exhibited at SoundWalk 2010 in Long Beach, California, on October 2.

See our SoundWalk 2010 project page for a recap of our part in this blocks-long event. Sponsoring organization FLOOD will be posting material on their pages soon and we'll refresh links once they do.

A mini-project now at WNIU radio tower. The DeKalb, IL WNIU radio tower support stays had a distinctive sci-fi ray gun sound when plucked. We returned to sample these in 2009 after nineteen years and to see whether the sound was as cool as remembered from college days. The tower, alas, is no more.