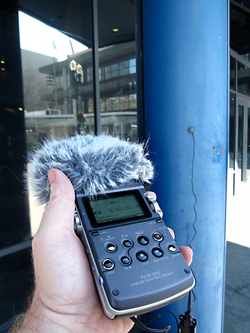 Checking out the Hammer Theatre Centre in downtown San Jose

In February 13, 2011, we were checking out the resonant properties of Jun Kaneko's sculptures downtown and comparing hand-held recording options. I'd gone back with the Sony PCM-D50 and Schertler mic to get a good comparison to what I'd captured the day before with my Xperia_X10. But with a morning left to spend exploring, it turned into a bit more of a ramble.

First I sampled a few metallic objects near the Hammer Theatre Center just behind Kaneko's sculptures. The lampposts were looking confusingly festive—as they sometimes tend to do in California weather—with the florist shop's bouquets hanging gaily beneath the colored lights left over from the previous holidays' season. Light strings tend to jump and bang around in the wind, and these were no exception. 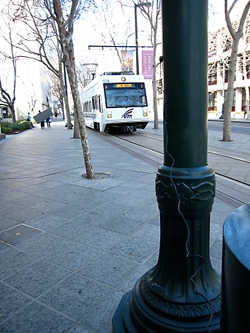 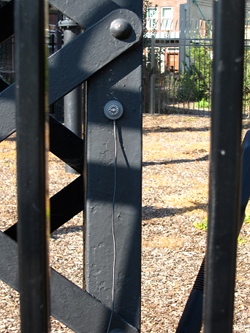 Remnant of the old Plat 3 facade 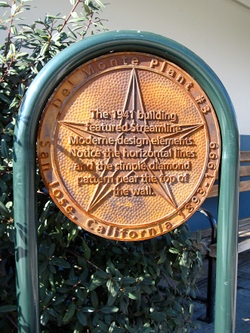 For several months I'd been circling the old Del Monte water tower just across the freeway, wondering whether it was accessible—Google Maps satellite images were inconclusive—so rather than sample an endless series of nearly identical lampposts (not always a lost cause, mind you, I just wasn't in the mood) I jumped in the car and drove about two miles to travel less than one.

The former Plant 3 was closed down in 1999 and has since been built over with modern flats, but the old water tower still stands. The Los Gatos Creek Trail runs right past the tower, just north of Auzerais Avenue just south of West San Carlos Street. There's a fence surrounding the tower's legs, but you can walk right up to it and the legs themselves are within (a somewhat extended) reach. I managed to get one sample,and though it is a faint one it seems to me to be suffused with voices, whispers, something just beneath the surface; nothing I can actually identify, though.

The SNR is pretty weak here, so download it and play back with some equalization to hear what I'm talking about. When I get time, I'll post a cleaned-up version, but my first pass attempt left the sample muddy so it will require some serious attention or else another take.

One word to the wise: the base of the tower and surrounding fence have received some landscaping attention and a great deal of attention was apparently paid to drainage. That means sand—quite a bit of sand—has been added to the soil. And sand, in an urban environment near a brushy watershed attracts...cats. I was so intent on looking up and leaning in through the fence bars that I neglected to look down until it was too late; one pair of perfectly serviceable but aging leather shoes instantly became gardening apparel, all in a day's adventure....